Pieces of Work: Marc Turtletaub on Moving from Producing Indie Darlings to the Director’s Chair for Puzzle 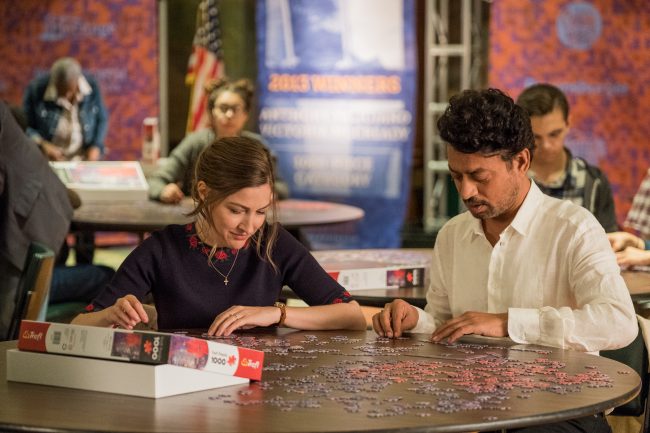 You will know the work of prolific producer and sometime director Marc Turtletaub, but may not recognize his name. Like Kelly Macdonald and Irrfan Khan, the stars of his fantastic new feature Puzzle, however, that soon may be about to change.

Turtletaub comes from a finance family. His father Alan Turtletaub founded The Money Store, a mortgage lending company in 1967 which Marc inherited charge of in 1991. Before the end of the century the younger Turtletaub had sold the company and newly cash rich, set his sights on Hollywood. He kicked off his producing career in a big, pleasant, yet indistinct way in 2004 with the Julianne Moore-led romantic comedy Laws of Attraction. It would be just two years later that Turtletaub and producing partner Peter Saraf would strike the quirky, small-budget, indie-dramedy gold that would come to encapsulate the style associated with their productions through company Big Beach—Little Miss Sunshine.

Sunshine Cleaning, Away We Go, and Safety Not Guaranteed are all Big Beach productions, and all connected by a loose constellation of thematic concerns most clearly articulated in that first Sunshine film—the tenacity of the individual will, the ability of the outcast to prevail over drab homogeneity, and the prickly entanglements of family. Turtletaub’s new feature, his second at the director’s helm, shares in the qualities that made Little Miss Sunshine a breakaway success, but is altogether a different affair—more subtle, more patient, ultimately, more rewarding. The director sat down with MovieMaker in advance of Puzzle’s release to discuss the distinctions between producing and directing, adapting an Argentinian film he’d never seen, and the spellbinding presence of star Kelly Macdonald.

Ryan Coleman, MovieMaker Magazine (MM): Walk me through how a 2009 Argentinian film ended up on your desk as the material that would become Puzzle.

Marc Turtletaub (MT): It started with a producer friend, Guy Stodel, who had seen and loved Natalia Smirnoff’s film [Rompecabezas]. I hadn’t seen or even heard about it. He thought it would be interesting to do an American version, so he optioned it and began working on it. Guy joined with another producer, Wren Arthur, and he and Wren brought in Oren Moverman. It took a number of years through different iterations and different thoughts as to how it would go before it came to me.

I chose not to watch the original until I finished this movie entirely. I didn’t want to have my process or filter clogged by someone else’s thoughts. I finally did get to see Natalia’s movie which is wonderful. She came on the set, and she likes our version as well. But they are different. The family dynamic is different; the tone is different. It’s been Americanized, but it has the core of her story.

MM: What was it like on set having producers around and in your ear, when it’s usually the other way around for you?

MT: To tell you the truth, very easy. Peter Saraf has been my producing partner for many years; I knew all three of our producers, and they’re all very easy to work with. The difference between directing and producing, for me, is when you’re producing you’re talking to one person at a time. You’re talking to the director during the shooting of the film, you’ll sometimes talk to the editor, definitely you’ll talk to the writer. But it’s one person. When you direct you’re talking to 125 people, all at once. That’s different. It’s not hard to listen to one producer. When you have 125 people, that’s a different dynamic. As I’ve matured I’ve learned how to surround myself with talented people, cast and crew, and the biggest thing is just to listen. It’s like the old Ernst Lubitsch story, you get all these great people around you and get the hell out of their way.

Turtletaub directs Macdonald and Khan on the set of Puzzle.

MM: What pushed you to take Puzzle beyond producing to directing? Was it the quality of the material or the content inside?

MT: It was really a combination. The writing was fantastic, and it always begins there for me. I also loved the subject matter. We don’t see stories of women over the age of 40 coming of age, so to speak, and following a passion. More and more we’re beginning to see that, think of Frances McDormand in Three Billboards last year. We’re starting to see more but it’s a handful of actresses who get those movies and then only a handful of movies to choose from. So when you see one, and it’s well written and has subtlety and drama and humor, you grab it.

MM: As a male director, how did you approach directing your lead actress in a role like this, which is so close and personal?

MT: I have hesitations about over-directing every actor, so I don’t rehearse. I’ve learned that through the years. I used to rehearse before. The last few years with my shorts I stopped rehearsing. When you’re dealing with world class actors, you let them bring in what they have. Kelly and I talked a lot about the character. We didn’t want her to be dull. Agnes is bright, but unsophisticated. She’s very smart but she’s not able to express it, except to her eldest son and later to Robert. Kelly described the way we would reveal her true self as having it “leak out.” It doesn’t come out all at once, but in little moments. You’ll see her humor, see her wit. It comes out gradually and by the end of the movie she’s found this voice, with which she can talk to her husband, talk to her bratty kid, be funny and make fun of herself.

MM: Tell me about shooting the primary interiors—Agnes’ house in Bridgeport and Robert’s house in New York.

MT: I had a great cinematographer who I will work with again and again, Christopher Norr. Christopher and I talked about how much happens to Agnes within these two houses. As she develops and grows, I wanted to see that evolution mirrored in the environment. I also had a great production designer, Roshelle Berliner. When we designed the house in Bridgeport, which is actually shot in Yonkers, we designed it in a way that feels like Agnes has been there forever. She grew up in that house, took care of her father when he became ill in that house, and she dotes on her husband and sons there. Chris blew a lot of smoke into that house, I kept saying, “Chris that’s too much smoke, I can’t even see the actors!” He said “No, it will work! We’ll fix it in DI!” And of course it worked. The idea was you wanted to feel the heaviness of it. I never wanted to critique the role of being a wife or mother, but we wanted to show for Agnes there was something more.

When she gets to New York, in Grand Central Station things really begin to open up visually, and then when we get to Robert’s house. We used no smoke, and I took all the furniture out. I wanted it to feel like it’s this big empty house, Robert’s wife has left him and now he’s banging around in this big old house alone. The light coming in was very different, bright and with contrast. It’s almost like her eyelids begin to open when she gets to New York—the light and space tell that story.

MM: Kelly Macdonald and Irrfan Khan are actors that audiences will likely recognize, but don’t often see in leading roles. What was the logic behind casting Puzzle?

MT: When I first saw Kelly Macdonald in The Girl in the Café and knew I wanted to work with her. Like you said, I recognized her instantly but couldn’t place where I’d seen her. Years later I saw her in No Country for Old Men, a Scottish woman playing a Texan, and then her role in Boardwalk Empire… you start to connect the dots between those three performances and realize what an incredible talent she has. I knew I wanted her for Puzzle, because she is Agnes.

With Irrfan it’s the same story. He is one of our great actors. I loved his work in the small Indian movie, The Lunchbox, and on the TV show In Treatment, which is a great actor’s vehicle that he’s particularly good in. I didn’t know if he’d be interested because he is this megastar in India, and he’s in these massive American movies like Jurassic World. He, like me, Kelly, and David [Denman] fell in love with the writing. That’s what drew us all together. They may not be names that everyone will know, but once they see the movie hopefully they’ll be names everyone keeps talking about. MM

Scary Surfing: Director Stephen Susco on Fearing the Internet and How Style Informs Story in Unfriended: Dark Web
Love Strong: Jordana Spiro on the Young Cast of Night Comes On and the “Luxury of Vulnerability”