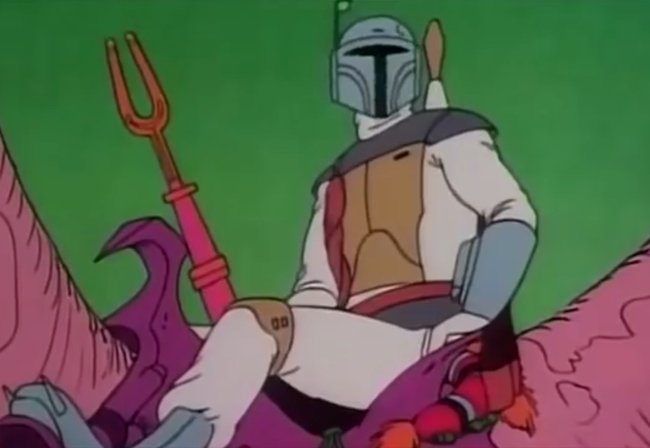 The Mandalorian is proud of its roots—so much so that several Mandalorian Easter eggs reference The Star Wars Holiday Special, perhaps the most embarrassing moment in the history of Star Wars.

The 1978 Star Wars Holiday Special aired just once, between Star Wars and The Empire Strikes Back, and spent years as a VHS curiosity copied and shared among amused Gen-Xers. (I got mine at a flea market in 2002.) It involved Han Solo trying to get Chewbacca home for “Life Day,” a Christmase-like holiday embraced by Wookies.

Especially with franchise films, directors and screenwriters are under increasing pressure to build a universe that can sustain many films and TV shows in the years and decades to come. Star Wars mastermind George Lucas was one of the first and most successful universe-builders, and Disney Plus’ The Mandalorian marks a new standard for universe building—creator Jon Favreau has not only latched onto some of the most endearing parts of Star Wars lore (Jawas, droids, whatever Yoda is), but also to a special that Lucas has never taken much pride in.

But when the special is remembered fondly, it is mostly because of an animated sequence that introduced the ruthless bounty hunter Boba Fett. (See photo above.) The title character of The Mandalorian bears a close resemblance to Boba Fett: Boba Fett is not a Mandalorian, but does wear Mandalorian armor.

In the 1978 special, we see Boba Fett ride a reptilian beast and wield a weapon shaped like a two-pronged fork, two things he never does in the Star Wars films. While riding his creature, he wards off another aquatic beast, which resembles a dragon and attacks Luke, R2-D2 and C-3PO’s ship while it sits submerged in water. It appears to be an early concept of a mythosaur.

We also see Boba Fett, at one point, walk past a character whose face resembles that of an anteater.

Anyway. The first of the Mandalorian Easter eggs in the first episode is that we see the Mandalorian (Pedro Pascal) learn to ride a reptilian creature called a blurrg. However, it is smaller than the creature Boba Fett rides in the Star Wars Holiday Special. Maybe the Mandalorian can work his way up.

Second, we see him wield the two-pronged fork weapon—though never against his blurgg. (One way we’re tipped off in the Star Wars Holiday Special that Boba Fett might be a bad dude is that he uses his weapon to hurt his animal.)

Third, the Mandalorian wards off an attack by an aquatic, dragon-like beast that is attacking his ship, a definite nod to the special.

Fourth, we see the Mandalorian’s prisoner, an unnamed Mythrol (Horatio Sanz), complain about missing out on his plans for Life Day.

And the fifth and last of the Mandalorian Easter eggs: the creature who uses a flute-like instrument to summon a land speeder for the Mandalorian looks an awful lot like the anteater-faced creature from the holiday special.

This story was updated after the second episode of The Mandalorian aired on Disney+.

How Waves Director Trey Edward Shults ‘Cheated’ for His Film
What Is Watchmen Saying About Race in America?