Madonna, Diablo Cody Collaborate on Screenplay About Music and Film 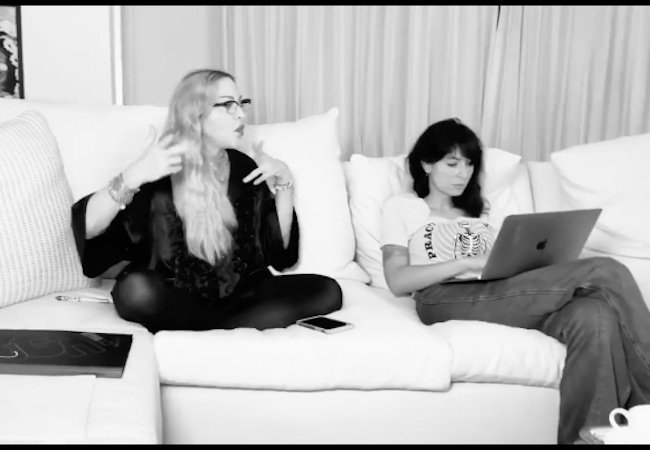 “When you’re stuck in a house with multiple injuries what do you do.?” Madonna asks in a new Instagram video, before answering: “Write a Screenplay with Diablo Cody about…………..📖🎥🎬🎤🎼🖤.”

Most of the emojis she posted seem to be able film and music. The black heart is about a black heart.

In the black-and-white video, the pair sit on a white couch as Madonna vamps and offers a running commentary. Cody, nose-to-the-grindstone, plugs away on her laptop.

At one point, Madonna asks what song should appear in a scene. Moments later. Cody asks her a question about a costume that sounds like one of the ones Madonna wore on the 1990 Blonde Ambition tour.

Madonna’s often-weird COVID-19 era Instagram posts have kept her in the public eye during quarantine. In March, she posted a picture of herself in a bathtub saying, ““That’s the thing about COVID-19, it doesn’t care about how rich you are, how famous you are, how funny you are, how smart you are, where you live, how old you are, what amazing stories you can tell.”

In another video, she sang about frozen fish to the tune of her hit “Vogue.”

Diablo Cody broke through with her screenplay for Juno in 2007, before going on to create the Showtime series The United States of Tara and write the films Jennifer’s Body, Young Adult, and Tully, among other acclaimed projects.

Here is the video, which you can decipher for your own clues about what they’re cooking up.