Continuing to explore her interest in lost souls, found elsewhere in her films The Holy Girl (2004) and The Headless Woman (2008), Lurcecia Martel’s new feature film Zama is an adaptation of Antonio Di Benedetto’s 1956 classic of Argentinean literature.

In a remote South American colony in the late 18th century, officer Zama of the Spanish crown waits in vain for a transfer to a more prestigious location. He suffers small humiliations and petty politicking as he increasingly succumbs to lust and paranoia.

Martel’s text looks at the daily ritual of living and finds beauty where it may not be distinguishable and palpable at first sight. Brilliantly structured sequences and performances combined with an elegant use of sound makes the temporal into eternity. Presented at this year’s Toronto International Film Festival, I had the chance to sit with Martel to discuss the process of adaptation, and the roles sound and custom design play within Zama.

Amir Ganjavie, MovieMaker Magazine (MM): Can you explain the process of adapting a novel into a film?

Lucrecia Martel (LM): Making a film based on a novel is necessarily a process of betrayal. It’s a type of love that needs to be betrayed or else it does not work. The issue was working with the symbolic and realistic elements of the novel, which have very different natures from one another. So, I took the real elements of the book, the real events, and worked around them. You know, if I took the real elements and worked with them then I would have given a sense of absolute reality to the rest of the film. I didn’t want to do that.

MM: Antonio de Benedetto’s novel is mostly about the anxiety of identity, asking the main question of “Am I Latin American or am I European?” Was that something that first attracted you to the book?

LM: What attracted me to the novel was the trap that people fall into when they think they are someone and all of the things that happen as they move forward towards it. The thematic meaning related to me. We had these luxurious weeks in the midst of a very impoverished region and those kinds of ideas came from there, from this desire to play with the pretentiousness of Argentinian society which pretends to be high society while living pretty much in the mud, actually being poor.

MM: The main book is pretty much a monologue. How did this impact your work?

LM: I was very clear from the beginning about not wanting to have this more common voiceover or narration. Instead, I wanted to have this almost polyphonic way with many, many voices that become one and form the interior voice of the character. That’s why we chose to have several very close-up shots with many voices at the same time. 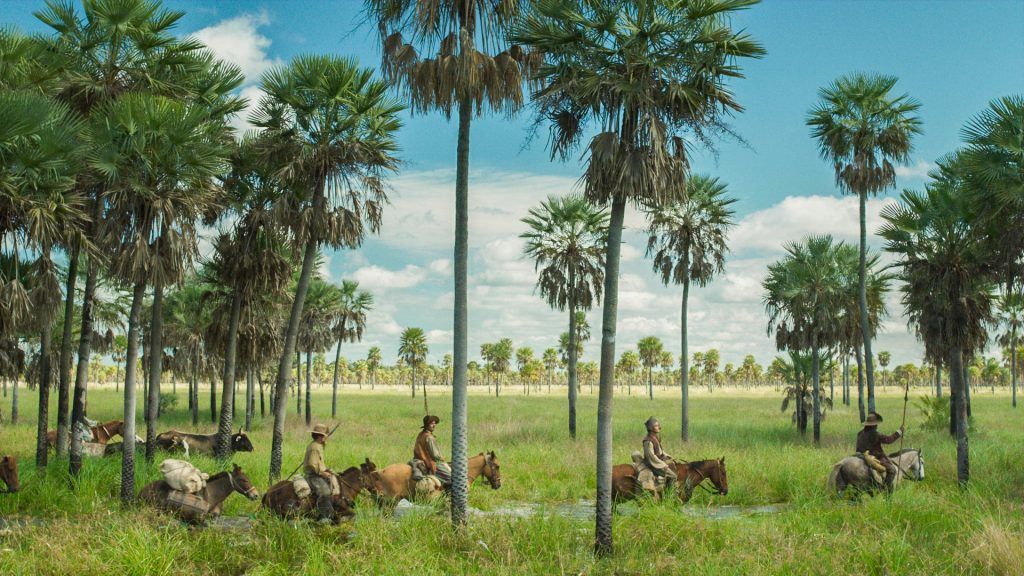 Zama was filmed over the course of nine weeks throughout the backwaters of Argentina.

MM: When I think of Zama it seems to me that here you are becoming very interested in the question of a protagonist—especially a male protagonist—who is very rich but who can’t keep his masculine culture. He’s not a hero. I think that this is the first time that we have seen a male protagonist in one of your films.

LM: I don’t think about the gender of my characters. I don’t think about whether my character is a man or a woman. For me, it’s not useful to think in those terms. I’d rather think about a monster that desires. I think that if I think of my character as a man or a woman then I will fall into a lot of common places so I never just think about that in those terms. I find it interesting that I get asked whether this is the first time that that my protagonist is male because I never really thought of my previous protagonists as being specifically female. Basically, the only thing that I thought about in terms of that quality of being a man or a woman, a gender, was in the original screenplay and that was also part of the book. For example, there is a rape scene and I didn’t know how to film that sequence without reaffirming violence against women. That was the only thing where I thought about gender in this film.

I’m also very interested in the question of the body and its representation in the movie because the movie is also about the recreation of the body. We have seen these guys coming from despair with expressive physicality. What method did you use so the actors could express this?

LM: We had this idea to get the actress to practice and learn a dance from the eighteenth century. It’s the kind of dance that you would see in a palace with a lot of mannerisms. We paid attention to details, such as how they wave, kissing when greeting, the way to place your hands, your arms. We were playing with those ideas. I really enjoyed it because I’m fascinated with playing these little details and creating, coming up with these ideas, like when they were cleaning their shoes before entering the palace.

MM: There is a very interesting and funny moment at the beginning. Zama is going to the beach and we see him watching few women who are taking baths, but he didn’t simply look at them but rather listened to them. Do you see a kind of relationship between voyeurism and listening?

LM: I’m glad you noticed that he is actually listening to them rather than watching them and that he is accused of being a Peeping Tom.

Brazilian actress Mariana Nunes has a stand-off with Zama.

MM: There are sounds by Los Indios Tabajaras in the movie and I don’t think they are in harmony with the time period that Zama took place. Why did you choose that music?

LM: What is the time period of a film that is based on a novel written in the 1950s that is set in the eighteenth century and that is filmed in the twenty-first century? What type of music encompasses that or what is the right music for a film in these conditions? We have to apply the same line of thinking as in the future. What would be the correct type of music for Star Wars? There is no correct answer for it so the only possible decision is based on a kind of equation in terms of not basing the music on the chronology but rather on other aspects.

MM: I’m very curious if you can comment on the scenery because they all look like paintings. Did specific painters for this movie inspire you?

LM: In terms of the architecture for the film it was based on the work of the Jesuits in Chiquitos region of Bolivia where they painted the walls with color. That’s not common in other regions of the country. I did not base the look of the film on paintings and in fact I was thinking more about television from the 1950s and 1960s.

MM: But it was based on a storyboard?

LM: No, all of the scenery was composed in place with the cinematographer. It was a very important, crucial collaboration with the director of photography but I chose the framing. I needed to decide on the movement of the actors so it was very personal.

MM: I was very amazed by the sound, especially in some cases where the sound is not totally synchronic with the environment. For example, there is a clicking sound that always comes when two characters are talking … That’s not very common in the cinema.

LM: It’s actually technically very challenging because the foley usually work to the picture. They look at what you see in the frame and that’s what they are recreating in terms of foley. But in my films it’s usually very important what’s not on screen so they have less to work with. It’s basically writing another script for foley specifically.

MM: I have a question about the costumes, since some of them are very funny and very original. Can you speak about the choice of costumes?

LM: When you work with Julio Suarez, the costume designer, there is a lot of thought that goes into it and we were looking at things like couches from the present day in regions like the Chiquitos. The art director was also very involved. We were looking at the regional sector in Brazil so we borrowed from different eras but of course the goal was to create something that made sense with its own inner logic.

MM: I noticed that around sixteen companies collaborated for this movie, a significant number. How was it working with sixteen different companies? Did they each impose their own criteria for making the movie?

LM: The Brazilian Bananeiras Films was on the project from the beginning as well as the American (Louverture Films). We also partnered with Danny Glover, who was involved from the beginning. These are small production companies but maybe because of that they are also willing to take risks that bigger companies would not take.

Daniel Giménez Cacho is Zama. The Spanish-born Mexican actor might be familiar to audiences for his work on the Almodóvar films Y Tu Mamá También and La Mala Educación

MM: One of the things that many reviewers are talking about is the long distance between this film and your previous work. Why did you spend such a very long time working on this project?

LM: Right after finishing The Headless Woman I received an offer to direct a science fiction feature and we worked on that for a year and a half but it didn’t really happen. I don’t see cinema as a career in which I have to be productive and I have to keep developing projects and producing. If you happen to make money with your first feature work then you buy a house with a pool, then you have to keep making more to maintain and pay for that lifestyle. I have a normal house with no swimming pool so I don’t have to pay for that. I don’t really need to make a ton of films unless I want to.

MM: Is there any specific project that you are currently working on or hoping to start?

LM: For the last five years I’ve been researching the murder of an indigenous leader and I’m trying to develop something like a visual essay about this subject. Of course, I do have different ideas but right now it’s very important to see how the film does in Argentina, especially because it’s going to be released soon. The reaction of the audience will probably help me to know my next step. It’s not so much how many people are going to see it—it’s not about the numbers—but more about seeing whether something happens between the film and the people. That’s the experience that I love with film and the audience will hopefully lead me to the next step. MM

Zama had its world premiere at the Venice Film Festival in August 2017, and opened in select U.S. theaters April 13, 2018, courtesy of Strand Releasing.