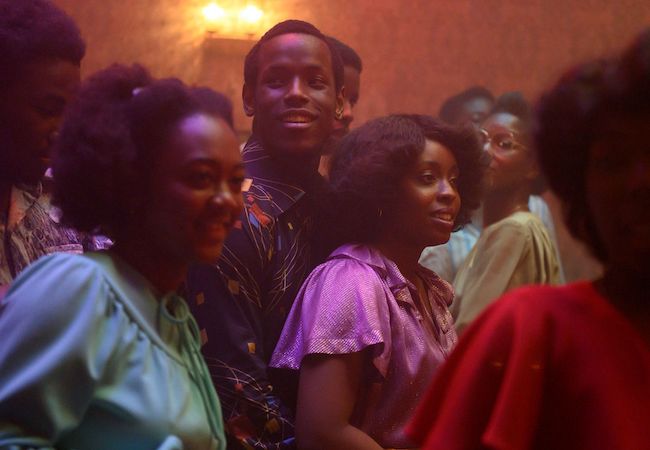 Lovers Rock, the second film in the Small Axe anthology from Steve McQueen, seems as simple, on its surface, as a house party: People get together. They set up a sound system. They dance, pair up, split off, reunite.

Except: Parties are actually complicated, a fact that Lovers Rock captures more seductively than any film I’ve seen. We talk about it one the latest Low Key Podcast, on Apple or Spotify or above.

Dazed and Confused and Last Days of Disco also immersed us in a group of young friends and acquaintances, in approximately the same era — Dazed and Confused is set in the mid-70s, Lovers Rock in 1980 and Last Days of Disco around 1980. Dazed, by Richard Linklater, and Disco, by Whit Stillman, are funny, insightful, beautiful and deliriously enjoyable films about coming of age.

But the stakes are higher for the characters in Lovers Rock than they are for the mostly white post-hippies of Dazed and pre-yuppies of Disco. Lovers Rock, though barely an hour long, accomplishes much of what those films do, but also tells a story of looking for love against a tacit backdrop of  violence.

The film and its characters are stoic enough not to mention why Black Brits in 1980 might have preferred to party behind closed doors than to venture out into clubs. (McQueen’s first film in Small Axe, the 1960s-set Mangrove, lays out the reasons overtly.)

In Lovers Rock, no one talks about racism, but we see evidence of it in the white hooligans who threaten Martha (Amarah-Jae St. Aubyn) and in the way the bouncer yanks an unwanted guest inside rather than draw the attention of police.

Lovers Rock also refuses to kill the vibe by mentioning that everyone at the party is there, indirectly, because of slavery and colonization: Their ancestors were enslaved in Africa, taken to British islands in the Americas, and now find themselves in the land of the colonizers.

The film also touches on class struggles, and the efforts of immigrants to adjust to the new, celebrate the old ways, or combine both together, like the DJs of the film’s house band, the Mercury Sound System, do with mashups of pop hits, novelty songs, and Jamaican dancehall.

You can enjoy everything about Lovers Rock at the surface pop-song level, just like you can show up at a party full of strangers, steal glances at the beautiful ones, perhaps make a new friend or two, and never think about the social agendas, machinations and backstories of your fellow guests. What you’ll probably remember most about the film is the mesmerizing, spontaneous singalong with Janet Kay’s 1979 hit “Silly Games.”

But you can also be the serious — too serious? — person in the corner who is suspicious of the well-dressed guy’s motives, is embarrassed by everyone’s silly games, and wonders why we need parties at all, when we could be home reading books.

We do need parties — some of us more than others – and Lovers Rock shows us why. Most impressively, it makes its case more with music and dancing than with talking. It uses its sound system for singalongs, not speeches.

Lovers Rock, by Steve McQueen, is now streaming on Amazon.

How Does Legion M Work? Inside the Fan-Focused Backer of Mandy and the New Archenemy
Joe Manganiello Poured Batman Heartbreak Into Archenemy