On September 30, Tan submits an appeal for the rating to be reviewed. As of this printing the MDA has not released their decision, and the director will wait until they do before she consolidates her distribution plans. When I ask her about digital distribution, she’s uncertain about the legality of that action, but “the larger picture is to find a way for people to watch it without having to worry whether it’s a ‘private’ or ‘public’ screening.” At the suggestion of international theatrical distribution, she laughs: “If only.”

On September 19, at the Century Hotel in Johor, 537 audience members (339 Singaporeans and 198 Malaysians) squeeze into the room designated for the To Singapore, with Love screening. Older attendees occupy folding chairs at the back; I join the younger and more able-bodied sitting cross-legged on the floor, as the clearly overwhelmed festival staff apologizes repeatedly for our discomfort. No one cares. Nor do we care that the film is projected onto a hilariously makeshift screen—two bedsheets, cut and pinned onto the wall. (“I was a little afraid about the projection quality and audio quality,” Tan tells me afterward. “That was something I had to get over really quickly.”)

After the movie, Tan fields passionate questions from audience members, one of whom describes himself as “aggrieved” about the effective ban: “Why should I be denied my birthright to watch a movie about Singaporeans? Are we doing enough?” 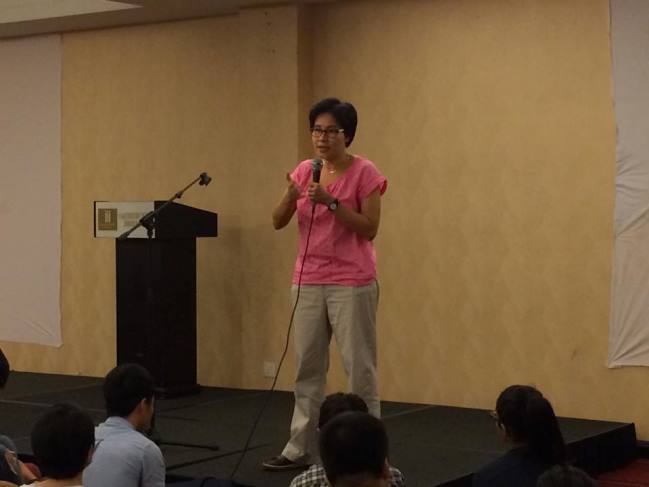 Tan addresses the audience at the Freedom Film Festival screening. Photograph by Lisa Teh

That’s not a question Tan can really answer. “This is a film I made for all of you, and I wanted you all to watch this—” “—at home!” someone finishes, to murmurs of approval.

“When something moves you,” the director tells the crowd, “you have to follow your instincts.”

Post-screening, I speak to Anna Har, the director of the Freedom Film Festival for all 12 years of its existence. The only human rights film festival in Malaysia, FFF is a traveling festival with screenings around the peninsula and a stop in Singapore; even so, Har says she’s “never seen Singaporeans speak as vocally as today.”

The festival has its own battles to fight, considering that Malaysia has the “same environment of [cultural] control” as its neighbor; organizers have faced warnings and arrests for their commitment to cinematic free speech. And interest remains underground at best: “In Malaysia and Singapore, you never get to see activist films like this,” Har says, yet “we can hardly charge for tickets; we screen films at a loss most of the time.”

She remains positive: Governmental interferences are “things to work around, but they’re risks that we are aware of—being creative.” I always know I’m in my neck of the woods when the word “creative” is synonymous for “out of line.”

Our excursion to Johor almost over, I accompany Jialiang, Priscilla and company to eat bak kut teh, a herbal pork soup (Food, all Singaporeans know, is better and cheaper in Malaysia). Over the meal, I learn more about them and about Singapore’s very particular brand of activism. Jialiang has six years of grassroots organization experience under his belt, but he scoffs at how misleadingly impressive that sounds on paper: activism in Singapore, he says, is still in “a comatose state.” The community, I infer from their conversation, is tiny; everyone knows everyone else, and every fight, from the abolition of the death penalty to gay rights, belongs to everybody.

They have reason for optimism. People are being increasingly mobilized by social media out of their slumber, as Priscilla tells me a few weeks after the trip. “There is much less fear of speaking out now, which is not to say that the fear has completely diminished.” For example, a Civil Society event that would’ve attracted 400 attendees 10 years ago, boasted 1,500 last year.

The Civil Society has more to overcome than just nervousness about public discourse, though. “Unlike the U.S., where the history of activism is centered very strongly on human rights, the rights-based discourse in Singapore is only just beginning,” Priscilla says. “The government’s rhetoric is that ‘human rights’ is a Western value that will lead to chaos and instability, so people are naturally suspicious about human rights. We try to localize the language of our advocacy. For example, when we talk about the death penalty, rarely is the focus on the offender’s right to life. Instead, we talk about the deterrent effect of the death penalty, the economic efficiency of the death penalty… pragmatic concerns that Singaporeans are attuned to.”

On the ride home, streetlights punctuating the dark blue length of the causeway, the Love Bus riders are contemplative and weary. The day’s excitement loosens its hold on us, releasing us back to our real lives around the world: Spain, Thailand, Los Angeles, Singapore.

Near the end of To Singapore, with Love, the exiled Ho Juan Thai gazes out across the Straits of Malacca at the Singaporean coastline, Gatsby in Malaysia. We see the back of his head; we know what he’s thinking. For all the Skype in the world—for all the ways that digital media has eradicated boundaries of distance, and of top-down control systems—there’s no metaphor commensurate to the movement over that causeway and onto Singaporean soil.

“It is worse being an exile than a detainee. The exiles in the film have remained so for so many decades,” Teo Soh Lung, co-editor of Escape from the Lion’s Paw and herself a detainee of Singapore’s Internal Security Act in 1987, writes in an email. “It is incredible that a government could be so unforgiving. [To allow the exiles’ return] would be to admit that they were wrong… Only, perhaps, a change of regime can cure the wrongs of the government.”

“I still see things as ‘Singapore’ or ‘non-Singapore’… these are all things I’ve got to unlearn,” says Ang Swee Chai in To Singapore, with Love. A surgeon and humanitarian who fled to London in 1977 when her husband, Francis Khoo, was accused of violating the Internal Security Act, her words become a motif of the film: “We are not an island.”

We return from our trip, both a pilgrimage and a voluntary exile—the time-honored tradition of leaving home to learn about where you come from. The bus rolls on through the sleepy night, moving along the quiet highways of northern Singapore. MM

To purchase To Singapore, with Love on DVD before July 31, 2015, visit its official website here (note that DVDs may not be shipped to addresses in Singapore). This article appears in MovieMaker‘s Fall 2014 issue.