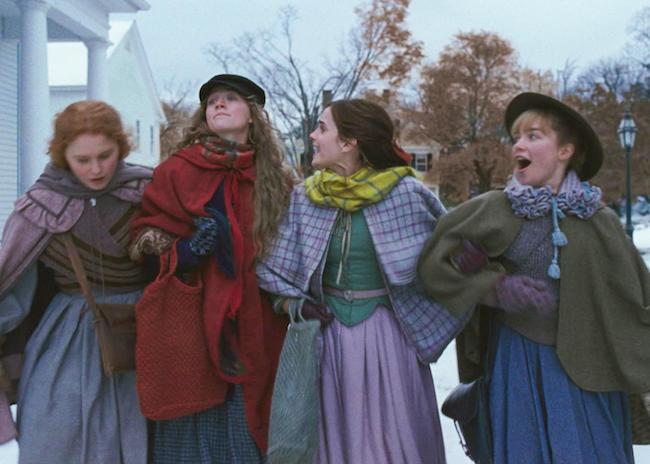 Greta Gerwig’s Little Women shows us from the start how tirelessly Jo March, played by Saoirse Ronan, works to sell her stories. We initially believe that the story Jo is telling in her novel is the story of her and her sisters, but Gerwig complicates things delightfully—and uses color to help us understand her machinations.

Little Women is not linear, but rather jumps back and forth through time over a seven-year period. In a Notes On a Scene interview with Vanity Fair, Gerwig points out her desire for the girl’s childhood scenes to be enveloped by a “golden glow.” In order to do this and differentiate between the two timelines, Gerwig and cinematographer Yorick Le Saux used warmer tones for the girls’ adolescence and colder hues for their adult lives.

The warmer-colored scenes suggest a time that was lively and jovial, at least as Jo reminisces about the past while writing her book in colder, more recent times.

At the end of the film, as the girl’s younger lives merge into their adulthoods, color becomes the differing characteristic between Jo’s personal life and the publishing of her novel.

Under the warm glow of train station lights, just as Jo is about to tell her love interest, Friedrich, that she wants him to stay, the scene cuts to Jo back in New York. There, in a darkly colored publishing office, Mr. Dashwood (Tracy Letts) and Jo discuss her novel.

The warm and cold scenes bounce back and forth, allowing Gerwig to end the film in a way that is true to the original novel while also adding a modern nod to Jo’s personal agency.

Jo agrees to Dashwood’s demand that her character marry, but only in exchange for the full copyright of the book. We see Friedrich behind the warmer lens filter and the negotiation in the cool-toned office.

The character of Jo loses some freedom, but the author gains some control. MM