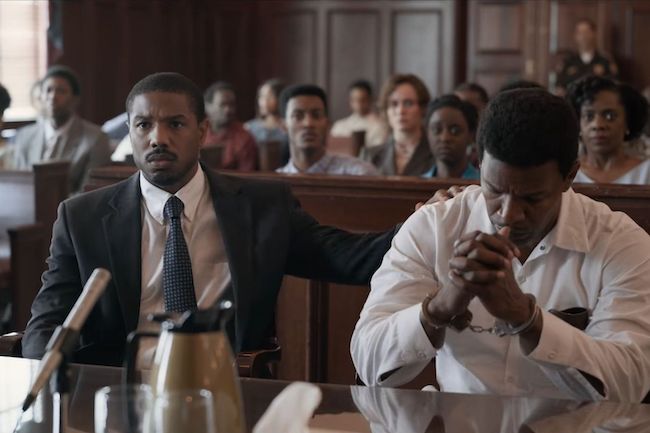 Just Mercy, starring Michael B. Jordan as a lawyer who defends a wrongly accused death-row inmate played by Jamie Foxx, is one of many films made available for free in response to the Black Lives Matter protests nationwide. In the latest Low Key podcast, Aaron Lanton, Keith Dennie and me talk about what the film gets right about racist policing, and what changes we’d like to see in real life.

The discussion of the movie leads to some comparisons of our own interactions with police. I’m white, and Keith and Aaron are black, and would you believe our experiences are vastly different? Note the extremely long silence when Keith asks me at the 34:13 mark in the podcast if a cop has ever walked up to me and asked for my ID for no reason.

You can listen on Spotify or by clicking on the arrow:

Just Mercy is directed by Destin Daniel Cretton and also stars Brie Larson. It got good reviews but not lots of attention when it was released in December at the same time as another death-row drama, the excellent Clemency.

Cretton told MovieMaker back in December that Just Mercy was very accurate — because it had to be. The film is based on the memoir Just Mercy by Bryan Stevenson, the attorney played by Jordan in the film.

Also Read: Willem Dafoe Loved Having Nowhere to Hide in The Lighthouse(Podcast)

He added that the film wanted to not only inspire people trying to repair the criminal justice system, but also educate people about how hard that is.

“Accuracy was definitely important so that when they watch this movie, people can understand what it really takes,” Cretton added. “This isn’t a made-up version of what it takes to prove somebody’s innocence. This is the long process that is in place right now in our system.”

1:30: Is Texas still under quarantine? Was it ever?

2:30: Aaron describes a very overzealous description of a suspect

7:00: The inhuman task put on people fighting for justice, and how it relates to Bryan Stevenson.

15:00: Could a false conviction like the one in Just Mercy still happen?

24:50: “We also need to take into consideration that there are KKK members in police departments.”

31:00: Thoughts about the war on drugs from Don Winslow’s Power of the Dog.

35:30: Keith talks about getting harassed for standing outside.

Movie News: How to Go to a Movie Next Week
Meet the UCLA Professor With the MEANS to Diversify Hollywood