Kyle MacLachlan Commits to the Ghastly Madness of Capone (Podcast) 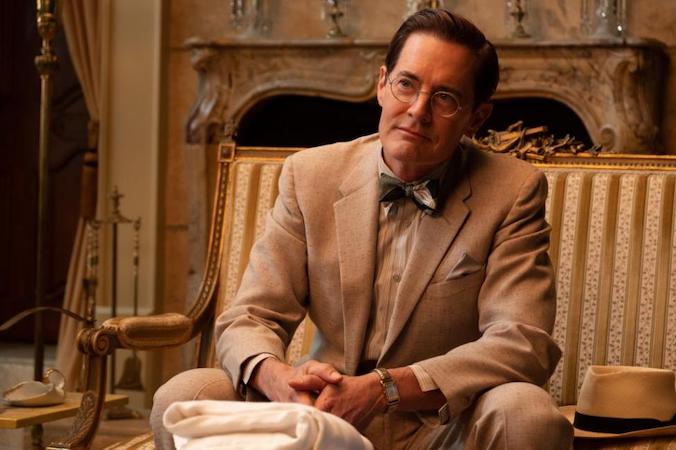 Kyle MacLachlan is a master of playing decent and upright good guys surrounded by macabre grotesquerie, so it’s fun to see him play a morally compromised doctor in Capone.

MacLachlan plays Dr. Karlock, who treats legendarily nasty gangster Al Capone in his final days, as syphilis ravages his body and mind. Karlock wants Capone, known to his intimates as Fonse, to take better care of himself. But his loyalties are conflicted.

“I liked this take on a character that we think we know, this mythic Al Capone character, and I’d never seen the story told from this point of view before,” MacLachlan says. “The character is very humbled in this world. I also felt that Tom Hardy playing this would be something special. I think he’s an extraordinary actor. And the opportunity to work with him was very much a part of my decision to do it. And I thought that his take on this would be very interesting and I was curious about that.”

MacLachlan acted against a dramatically made-up Hardy, whose appearance in the film is at a nexus between prizefighter and corpse.

“The makeup was extraordinary to the point that you’re up close and you really can’t see it,” MacLachlan said. “So I just reacted to this character that he created. And in fact when I would come to work in the morning he’d already been transformed… so I basically just interacted with him or saw him as this character.”

“He didn’t walk around in character. He was accessible and fun and outgoing when we were not filming. But it looked like that the whole time, to me,” MacLachlan added. “I enjoyed it.”

MacLachlan does that courtly thing he does so well, looking contained and controlled in a proper bow tie. But he’s keeping a secret from his damaged and dangerous patient.

You can listen to our full conversation with MacLachlan on Spotify or by clicking this arrow:

Capone is one of two new period pieces in which MacLachlan appears this year. The other, Tesla, reunites him with Ethan Hawke, his co-star in 2000’s Hamlet. MacLachlan notes that he’s done a few period pieces before, including Kafka — listen to the podcast for his not-fond remembrances of the wardrobe — and notes that his David Lynch projects also feel a bit like period pieces, no matter when they’re set.

MacLachlan got his start on Lynch’s Dune — “I wasn’t plucked from relative obscurity, I was plucked from complete obscurity,” MacLachlan jokes — but the film proved a disappointment. Dune is on many film fans’ minds again lately because of Denis Villeneuve’s planed remake.

“I came in on a the ‘star train,’ you know? I was gonna be a Hollywood star. And that’s the train I rode in on, and then when I went back out again, I was riding something else,” he joked.

But Lynch soon cast him again, in Blue Velvet, and he established himself as a brilliant straight man in cinematic worlds gone mad.

Movie News: Scarface, Capone, and Pepe the Frog Will Be Your Villains Today
The Best Online Film Festivals of 2020, Presented by FilmFreeway