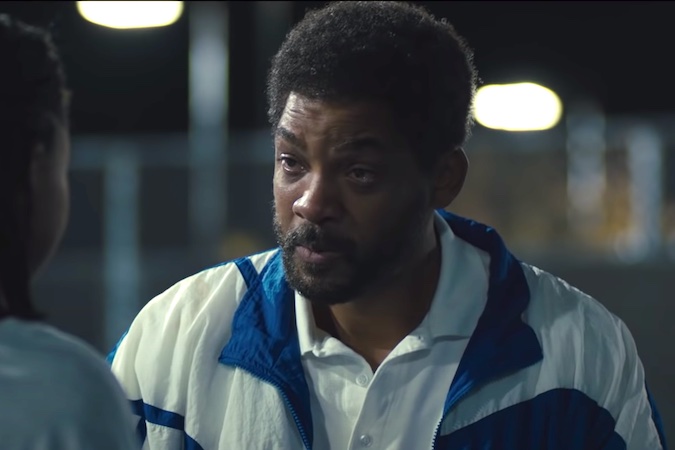 The King Richard drive-by shooting scene is a cinematic marvel, recalling Butch Cassidy and the Sundance Kid in its blend of pain, chaos, and grim absurdity. The film dramatizes a real, horrible, pivotal night in the life of Richard Williams — and gets the essential stakes of it exactly right.

King Richard, like all biopics, dramatizes certain events to keep the story moving and drive home crucial themes. But some of the most affecting scenes in the film happened almost exactly as they did in real life, and the drive-by scene in one of them.

In the film, a group of gangsters led by a character named Roc threaten to come to the Williams home and sexually assault the oldest daughter, Tunde. Richard Williams, played by Will Smith, has been clashing with the gang members for a long time, asking them to leave his daughters Venus and Serena alone as they practice on the local tennis court. But when Tunde is threatened, he stands up to the gang — and is mercilessly beaten in return.

So he gets the handgun he uses for his security business, tracks the gang to a local fast-food spot, and is about to kill their leader. It’s a hellish moment, because we know that if Richard Williams is killed in retaliation, or goes to prison, that will likely be the end of Venus and Serena’s dreams as well.

But then — out of nowhere — a car pulls up, and a rival gangbanger takes out King Richard’s nemesis for him. Days later, Richard Williams makes peace with the remaining gangsters, who pledge to protect him and his daughters.

What happens in the film is pretty much what really happened, according to Richard Williams’ 2013 memoir, Black and White: The Way I See It.

He writes that in December 1985, “in my continuing effort to get the gangs to stay away from the courts, I got into a fight with six or seven gang members” and that when he woke up the next day, “ten of my teeth were missing from being kicked out of my mouth.” He also had a sprained arm, serious bruises and broken ribs — “breathing caused me excruciating pain.”

His injuries were even worse than the ones in King Richard — the real Richard Williams said he needed to be treated at a hospital. Also, the tires of his Volkswagen bus were slashed, and the windshield shattered.

“My dreams were smashed like my body,” he writes in Black and White.

Weeks went by as he recovered, worried over the cost of fixing the VW bus… and plotted revenge.

He writes that he took a 12-gauge pump shotgun — not the slick handgun seen in the film — down to the tennis court.

“The gang members saw the shotgun and took off,” Williams writes. “I was disgusted and filled with rage. I went hunting and I do believe I would have killed every one of them that day if I had found them.”

Eventually he gave up and drove home, he says in Black and White. But there was traffic, because of an ambulance and police cars.

“Lying dead in the middle of the street was one of the gang members who had beaten me,” he writes. “Gathered around his body were his friends and family.”

Hearing their anguish, all of his anger left him. He writes: “I had no idea what had happened, but at that moment, I knew I never wanted to cause that type of pain.”

He went home, continued enacting the plan he had started for Venus and Serena Williams even before they were born, and went about making almost everything in that plan come true.

King Richard is now in theaters and on HBO Max.