Shooting to Kill: The Director of Killing Ground Shares His Production Diary Entries on the Film’s Toughest Challenges 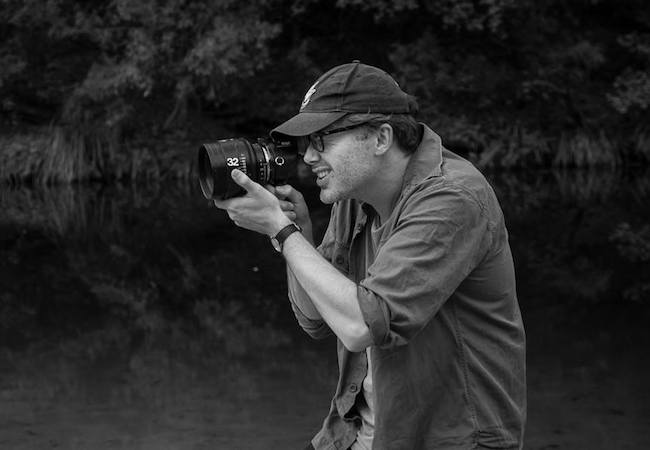 Here are some war stories from a shoot that felt like its own survival tale, including excerpts from a diary I kept sporadically during the production of my film Killing Ground.

“I re-wrote the scene we’re filming first up. Adding dialogue to the discussion of “image rehearsal therapy.” I felt it read too abstract. Wanted to bring it back to the family. Julian and Maya were happy with the changes, unfazed about getting them at the last moment.

Spent the morning filming the family walking to the falls. Everything I think will be simple turns out not to be. The path is too thin to swing a cat, let alone a kid, so I change the action to keep Ollie in the backpack. Turns out to be a good move, as Liam is cooperative and mostly happy.

The small path made it difficult for crew to move. It was also stinking hot. Luckily it was all on Steadicam. We got everything but one shot—leading the family to the Falls—until Liam could take no more. We tried to sub his twin brother Riley in but Riley wouldn’t settle. Then a storm broke over us. Thunder, lightning, torrential rain. Everyone runs for shelter. The weather app is very popular on set.

Rick (1st AD) staged an early lunch. I had an interview with Channel Nine about shooting in the local area (the reporter and I standing under umbrellas while we talked). Mel Gibson is shooting Hacksaw Ridge nearby, but he wouldn’t talk to them.

We filmed family tent interiors after lunch, the tent entirely covered in tarps. It was the only dry patch of sand on the beach. Started filming despite continuing heavy rain drumming on the tarps, making the sound unusable. Again I have to tweak the scene. It started with Rob commenting on how alike Margaret and Ollie look. Actually, they look nothing alike, so I changed the comparison to their smile. (This scene didn’t make the final cut.) Eventually the rain eased up enough so that we could get some dialogue clean enough to use.

The rain meant we couldn’t finish the walk to the Falls today. I can feel the film being washed away.”

The hardest part of the Killing Ground shoot was the weather. We shot in supposedly the driest months in Sydney but were slammed by rain. Compounding the problem, most of the film is set outdoors with next to no wet weather options nearby. Anything that costs you time while you’re shooting has a huge impact, and I estimate we lost three days over the course of the shoot. Originally scheduled for 27 days, we ended up shooting 29 (with two days of pick-ups) largely because of the weather.

When the time came to break for a week, we were days behind and would struggle to finish the film. I had to lose scenes. During my “week off” I re-wrote the opening entirely, ditching the scenes of Sam and Ian’s ordinary world (an apartment in the city) and their travel to the bush, starting the film instead with Sam and Ian already on the road (taking some inspiration from the opening of The Vanishing). Although we had already shot some elements of the original opening, the city locations were miles away from our bush locations and I knew it would take days to finish the sequence. It was one of the best decisions I made. The new opening did everything the old scenes did with greater economy and pace. The two characters, forced to amuse themselves on a long road trip, reveal more about themselves than any tour of their apartment would.

The only upside to rain was that it put a dampener on a local arsonist who was trying to light the place up while we were shooting.

Shooting Next to an Army Base: Day Two

“Loud and close artillery fire at dusk. Helicopters too. Fortunately it didn’t last too long.”

Scouting for the location we tried to find the middle of nowhere as close to Sydney as possible. We ended up at Simmo’s Beach, a nature reserve on the Georges River in the Sydney suburb of Macquarie Fields. The location was perfect: beautiful, felt remote (despite being only hundreds of meters from houses), and easily accessible. One downside was its proximity to the Holdsworthy Army base on the other side of the river. The army conducted live fire exercises (with tanks, helicopters and machine guns) all through our shoot, saving the heaviest barrage for our biggest dialogue day. With limited warning of when they were on there was little we could do except shoot through it.

To make location sound recording more difficult we were also triangulated between three airfields so had a fairly constant stream of planes to contend with. I owe sound recordist, Francis Byrne, big time.

With a little patience we managed to dodge most of mess, and anything we couldn’t avoid, or fix in ADR we buried in bird song. Those birds get loud!

Working With Animals and Children: Day 14

“Pigs, dogs and kids: What the fuck was I thinking?”

I don’t remember what we were shooting on day 14, but I remember the feeling. There’s a reason they say never to work with animals and children, but provided you’re not asking a child or an animal to do something beyond their capacity, and you have a lot of time and patience, you should be okay. Our twin toddlers Liam and Riley were great; the hardest thing was getting them to sleep when we needed the character to be asleep or unconscious. We had to work around their schedule. This meant being prepared to drop whatever we were shooting to get the shots of Ollie asleep in the car. I discovered the simpler the blocking and coverage, the more likely you are to get what you need.

“A day of killing and dying.

What I had thought would be a day of intense emotion was actually a very technical day: guns, squibs, tricky choreography, long tracking shots, chasing the light, hitting marks and masking hits.

At least the sun was shining, the birds were singing (not too loudly) and the army and the planes took a day off.”

Killing Ground is a violent story but it’s also a story about violence. About how violence dehumanizes its victims—robbing them of choice: what other choice do we have in the face of overwhelming violence but to fight, flee or freeze? These are animal, instinct choices.

I tried to make the film feel as real as possible—including the violence. Knowing that this was going to be confronting, I was careful about what I show, and what I leave to the viewer’s imagination. The worst violence occurs off screen.

When it came to filming these scenes I was careful to create a safe space for the actors to work. That meant not only being rigorous about shooting the stunts and anything involving firearms, but also giving the actors the emotional space to go where they needed. And not just the victims: it’s hard being brutalized, but it’s also hard to be doing the brutalizing.

Shooting violence isn’t easy. You need to allow plenty of recovery time… for everybody. MM