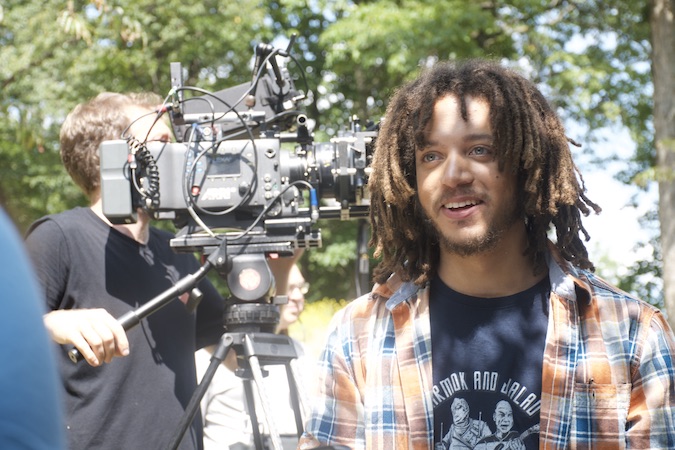 Killian and the Comeback Kids is the story of a young mixed-race musician forced to return to his rural hometown after an expensive college degree. A chance encounter with a childhood acquaintance leads unexpectedly to big plans that could unite a divided community. In the piece below, Taylor A. Purdee, who wrote and directed the film — among other things — talks about unexpected obstacles — and some nice surprises.

I shot a film a while back. It’s out this week, big screen, whole classic thing. Finally at that “made it look so easy” phase. But anyone reading this knows better.

Sure, it was a lot of work. In all the normal, unfathomable ways that making a film is.

I’d written it. I was directing it.

I was playing the lead.

I was co-writing the music.

Because of course, why wouldn’t it be a bit of a musical. (Once, not La La Land)

I was playing my character’s instruments.

I was singing my character’s part.

I was directing my father.

But none of those were the problems. It’s never the ones you’re ready for.

We all know the mythic cinematic pitfalls to look out for. Uncontrollable stars, slimy producers, thieving distributors, insider trading on the festival circuit. Even a cursory reading of film history gives you the sense that of course you know which of Coppola’s mistakes to avoid, what made Scorsese clever, how Truffaut did it first.

It’s hard enough to create a family on screen. The chemistry, the shared look, it’s a lot of alchemy. We got a head start by casting my father as my father, one of those times it’s good to have an actor in the family. How do you get through directing your dad while playing opposite him? I’d suggest the same rules that always applied to playing pretend together: In the end, Darth Vader always lets Luke win.

But for all the effort that saved us, we made it up by trying to cast a child actor who had to:

It felt like we saw every not quite white pre-teen girl in New York. Finally someone in the town we’d be filming in said, “If you really can’t find anyone, I saw this kid at the community theatre that kind of looks like you.” Well, the kid was great. Of course filming was set to start just about the same time as the fourth grade, but that’s Chinatown.

Story continues after the trailer for Killian and the Comeback Kids:

It always seems like good advice to “write what you know” and follow in the wake of works that inspire you. But when I decided that meant I should audition every actor in New York I could find who had done any stage production of the film Once, I may have gone too far. But still, we pulled one of our dream cast members from that show.

That would have been flawless, except that she was under contract for the great white way’s new production of Kinky Boots. She came in to read for us between her matinee and evening shows, and I took that to mean she was pretty committed.

Sure, a picture can fall apart the week before, maybe even the night before. But only ever other people’s pictures. We got a rather confused message from our Broadway darling’s agent that somehow, though it had all been cleared weeks before, our star suddenly couldn’t miss the eight or so consecutive shows our schedule required. She still wanted to do the film…but how could she?

In the end, we got her. It blew up the schedule. It meant that what would have been eight straight days with the core cast had to be broken up over three weeks, allowing her to only miss one show a week, the Sunday matinee.

What the fabulous writings of historians like Peter Biskind don’t help you even consider preparing for are things like shooting in a town that is so small that — while the community mowed whole fields for the film crew to park in — the same people couldn’t quite imagine that call times, or even whole shoot days, aren’t exactly malleable.

They don’t prepare you for the fact that, even with every permit imaginable and the mayor on speed dial, you still won’t get the scene unless someone on your crew happens to know the soccer mom who controls the Muzak that plays in the town square… and can turn it the hell off.

They don’t prepare you for clearing a fantastic countryside location with the owner of the farm, only to have the other side of the family show up the day of filming to claim that one corner of the field is theirs and has been since such-and-such a blood feud in 1902.

But luckily, there’s still some magic in the movies, and who doesn’t want their favorite grandfather’s cornfields immortalized on binary celluloid?

You expect music clearances to be difficult. You don’t expect the godfather of folk to force you to write and record and mix into a close-up a new opening moment, a month before the absolute last picture lock.

You expect a struggle over final cut. You don’t expect your focus puller to be convinced he’s watching a North Korean nuke falling in real time. When you try to get to the bottom of the commotion in playback, fair enough — there is an unreasonably bright something falling from the sky. And even though you can get down with “wow, great shot of a shooting star,” you can’t believe that it happens in the middle of a monologue about, well, stars.

You can, however, believe that people will think it’s a slightly over-the-top CGI choice. So you add “No shooting stars were faked in the making of this motion picture” to the credits. Who are we to argue with the cosmos.

The further I get into my life as a filmmaker, the less every legend and story and mythical warning from the romantic celluloid past proves useful, and the more it’s the nonsense that loses you a location and finds you a comet.

Killian & the Comeback Kids, a A Hope Runs High Release of a Karmic Release Ltd. Production, opens Friday, only in theatres.

Justin Chon Set Blue Bayou in New Orleans Because of Its Resilience
St. Vincent Pokes Fun at Her Own Ego in The Nowhere Inn