Your Key to Distribution Success: Get Keyed in to Key Art, and You’re On Your Way to an Instantly Iconic Movie

Think about some of the most famous posters ever produced: Jaws, Scarface, Taxi Driver, The Shining, Ghostbusters, E.T., The Godfather. What do they have in common? To my eyes, all of those posters suggest the story of the movie in an irresistibly enticing way.

When viewers are browsing through Netflix, how do they distinguish between the thousands of titles available? Often the only tools a film has to win eyeballs are a brief description and a small image—i.e. the key art. The goal in creating key art is to distill the theme, tone, plot and character arcs of a film into one clear image. This might sound simple, but it is like taking a hundred-piece puzzle and pulling out the one piece capable of telling the whole story.

Major studios spend hundreds of thousands of dollars to produce key art, producing multiple posters—and individual character posters—for big titles. I’ve created key art for major studios with big budgets, and they often budgeted for special photoshoots. I have also worked for independent filmmakers with small budgets and little to no material to create key art. Although obviously helpful, a large budget is not critical—you can get key art done for just a few thousand dollars if you are prepared and focused in your approach.

You’ll be well ahead of your fellow indie moviemakers if you are thinking about the marketing of your film during development. What picture do you want popping into people’s heads the second they hear the name of the movie? If you know that, you can succeed despite a paucity of resources.

Commissioning an Artist or Agency

The key to getting the most bang for your buck is to find an agency that will listen to your proposal and then package it in such a way that it sells.

Get a recommendation from a moviemaker who has already been through the process to avoid unreliable designers. Ask to see a portfolio so you can reference any of a designer’s previous work in describing your desired key art. It is also beneficial for the designer if you reference other posters and what you like about them: color, composition, tone, etc. You might be able to find an independent graphic designer to create your key art for under $1,000, but be wary of a slower timeline and narrower approach. Working with an agency can usually produce a greater array of ideas and a quicker turnaround, and it might even offer other services as well such as trailers or digital marketing.

Regardless of whom you choose to work with, get them involved before production so they can produce rough sketches which will let your photographer know what to focus on.

Write a creative brief informing your artist or agency of your vision. This brief should include input from everyone who will be involved in the final decision as to what the art will be, what message will be conveyed, what style will be produced. Here is an example of an excellent creative brief we received from an independent filmmaker. It is short but very informative, despite the fact that he had no assets (like photography) yet:

I would like a one sheet standard promo/teaser for a feature. Will be using this for digital promo and for our investors. We haven’t shot anything yet, so we would need the promo to be designed from scratch.

Title: Island of the Undead: A Zombie Pirate Rock Opera

Talent: TBA. I’d rather keep the talent off for the moment in case there are changes.

Logline: When a group of documentarians researching the lost treasure of legendary pirate John Rackam crash-land their charter plane on a mysterious island, they unearth a tomb that is said to encapsulate the cursed souls of undead pirates marooned there centuries ago.

I want the art to evoke a sense of passion and brutality; with a bit of humor lurking in the cracks. Although we’re aware of its B-film stature, I want the poster to feel big. Like, Michael Bay-over-the-top big. In a perfect world, we’d have something like a half-dressed pirate girl rising out of the ocean (facing away from us) with water cascading from her body. She’d hold a pirate flag in one hand with a broken guitar axe (dripping with blood of course) in the other, looking out onto a burning ship in the distance, while an army of pirate zombies make their way towards her. I realize that’s a bit specific and absurd. But I wanted to give you an idea of the type of poster I see in my head and then let you guys go crazy with it.

We provided five comps and he chose number four. Here is the final key art poster. 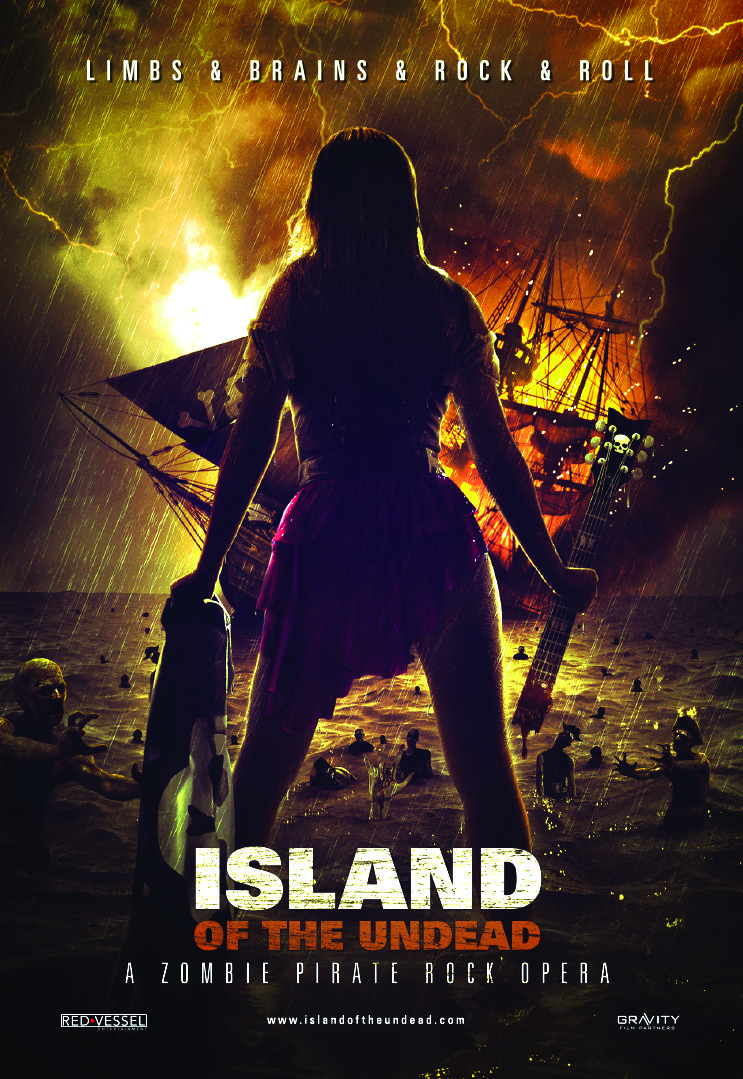 Sometimes an agency’s presentation does not correspond to what’s eventually produced. If this happens to you, don’t panic, fire your staff and start over with a new one. If you do, the next presentation you receive might well produce in you a sense of déjà vu. Just let your agency know that there is nothing in their presentation that you can use—as diplomatically as possible—and clarify what you do need.

Providing great photography to your artist is a big plus. All the major studios have unit photographers who capture imagery while the movie is being filmed—but many independent moviemakers won’t have access to that service. One alternative to this is using film clips from actual footage, but this seldom works. Our company, for example, often receives film clips from our clients, in the mistaken belief that they are high-quality enough to use—but they produce low-resolution, gritty art.

Find a way to photograph your cast and get unit photography. You may have a personal camera you can use (just don’t use a low-res camera phone!), or a photographer friend.  If you don’t have the ability to hire a still photographer to work on set every day, you can arrange to have a photographer on special days, photographing the cast on the set to provide the designer with more assets with which to work. It’s always helpful to consult with your designer before production so that he can produce some rough sketches, which will let your photographer know what he should focus on. Random, unplanned shots are of little use in the creation of key art.

Effective key art is always easy to read. Well-crafted posters will include a great image and logo, and copy that is both catchy and eminently readable. Unfortunately, great copy on lots of posters is negated by type too small to read easily, or placed in an area that renders it difficult to see. This is a common mistake that you can easily avoid making.

Logo designs are usually created in conjunction with the key art, but a logo can be created at the beginning of a film’s existence to be used in correspondence or on a website. Your logo is just as important as the key art. Color, shape and font choice in a logo give the viewer a clear idea of what type of film to expect.

After the key art is completed, you should think about producing additional artwork for other uses such as social media, websites, DVD packaging or sell sheets. In the early stages of a release, when you are trying to establish your film’s presence online or elsewhere, it is beneficial to maintain consistent branding across all platforms. Negotiate with your artist upfront to adapt your key art for these other avenues, which may get you better pricing, bundling all the different formats in one package deal.

Don’t forget that what works for a movie poster will not necessarily work for other things. Most movie posters include more information than can be successfully squeezed onto a DVD, for example.

I met someone recently who’d received negative feedback on the key art he created—because it was too good for the actual film! If overselling the film is the biggest criticism thrown at your key art… well, you’re doing something right. So don’t ever hold back on developing the best possible images for your films. MM

Dan Arriola is the founder and co-owner of Bravo Design, Inc. Arriola entered the motion picture industry in 1972. Less than two years later, he was in charge of multiple high-profile accounts, including Disney, Columbia Pictures, MGM and Warner Bros. He started Bravo Design in 2001 and currently works with both big studios and independent companies.

This article appears in MovieMaker‘s 2018 Complete Guide to Making Movies, on newsstands now. All images courtesy of Bravo Design.

More in Inside MM - Distribution

New York Festivals 2017: There’s A Prize For Everyone and Everything At This Awards Gala in Vegas
Exclusive: Nick Thune and Kaily Smith Westbrook Trip on the Digital Age in This Clip From People You May Know (Video)