Persistence Pays Off: Alien: Covenant‘s Katherine Waterston is Finally Ready For Her Close-Up

Do a cursory scroll through the IMDb page of Katherine Waterston, and you’ll find someone who—on the surface—is in the midst of a moment.

It’s the type of moment that tends to live more in the glossy pages of celebrity profiles, or in breathless press releases, than in real life. But there’s nothing fictitious about Waterston’s current streak of success. On the heels of working with singular forces like directors Paul Thomas Anderson, Kelly Reichardt and Danny Boyle, the London-born, New York-bred actress has moved into another cinematic dimension: movie star.

This is a term she vigorously resists, and for good reason. It undercuts artistry and amplifies stardom. And above all else, Katherine Waterston, irrespective of a project’s scope and budget, is a damn fine artist. If her performance in last year’s Fantastic Beasts and Where to Find Them didn’t convince you, Alien: Covenant, the latest Alien installment from brash auteur Ridley Scott, will.

To Waterston, her reality remains unchanged. “I’m too close to what’s happening in my life for me to have much perspective on it,” she says. “But on some level it’s not really that big of a deal.” She has no delusions of grandeur about playing pretend on the silver screen. There are no lives being saved from this profession; no inherent humanitarian goodness making the world a better place. “People kind of ask me these questions in that way, you know. ‘How has your life changed?’ or ‘What’s new now?’ It’s the same thing; it’s just I’m making more than $300 a week now.”

Throughout the early aughts, Waterston was lucky to make even that much working in New York theater. “It’s stressful being a freelance person,” she says. “You know that when a play ends, you have to go back to trying to find something again. You don’t know how long you’ll be unemployed for. Your life is full—full of anxiety—but it’s full.” She’s able to recall the difficulty, but also the excitement, of hustling for her art. There was bliss in the act of entrenching herself in work, desperate for spectators to experience powerful theater.

“There’s something galvanizing about being an underdog,” she says. “I was looking around and seeing all these really talented actors who were struggling, too, doing it for little to no glory.” The glory, she discovered, came in the form of characters, some of which she believes she was meant to play. “Sometimes you just feel a connection to a character. Not because they’re anything like you—you just feel you know them.” There’s a pause. “That’s thrilling, you know? It’s also devastating if [directors] don’t pick you. If they don’t agree.”

Talk to any performer and a familiar narrative starts to emerge: Elation, followed by rejection. And then more rejection. Then, if they’re lucky, probably still a little more rejection before a break. Waterston is keenly aware that she is an outlier, one of the lucky few who can say they’re a working actress. “There are loads of little victories and tragedies along the way,” she admits. “Moments of confidence and moments of panic. It’d be great if you just got hired by a good director and felt confident and happy from then on out, but that’s just not how life is for anybody. The imbalance is more constant.”

In fact, instability has been her way of life for so long, it has in its own way been a shield. “I remember in 2008, when people started losing their jobs all over the place, actors were the only people who weren’t too shook up because they were just used to the uncertainty all the time.”

When asked about internal doubts, Waterston neither pushes back nor jumps in. She’s patient, careful. She operates with sincerity, but she’s not overly effusive. Writer-director Janicza Bravo, whose new feature Lemon premiered at Sundance this January, collaborated with Waterston on the 2011 short film “Eat!.” Bravo describes the actress as uncommonly “thoughtful, curious and open.” Open as she may be behind the scenes, though, her on-camera presence often has shades of mystery, which Bravo puts her finger on: “Her characters always seem to have big secrets.”

With an actor father (the legendary Sam Waterston) and siblings, Katherine had the same nightmarish visions of failure anyone who has ever created anything has experienced. “You just can’t let the doubts win,” she says now, as if in a refrain. When no one was watching her “small theater stuff,” she kept her head down and plunged forward. “My friends from high school were talking about their 401Ks and things I didn’t have in my 20s, because I wasn’t getting a promotion at the firm. There were scrappy years where I worried about my future or if I was being irresponsible. But if you’re lucky enough to have representation starting out, there are lots of parts. You may have a devastating Tuesday and a thrilling Friday, you know? It’s a real rollercoaster ride.” 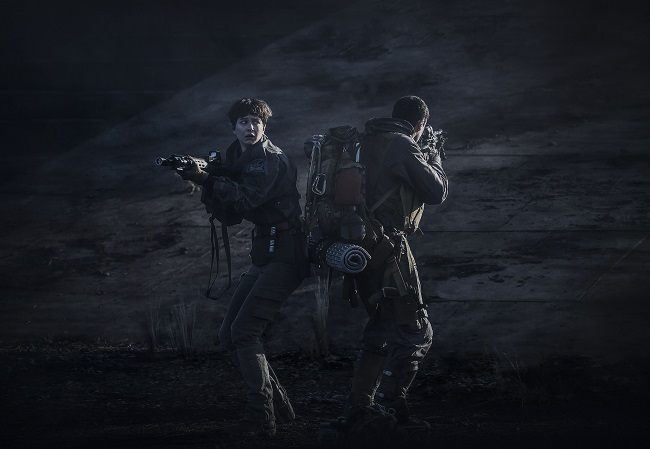 In Alien: Covenant, a seemingly Edenic planet has truly terrifying surprises in store for its colonizers

“I think when you let yourself down, those are the darkest days,” she continues. “When you feel like you didn’t do everything you could do—blowing opportunities.” This is where many of her fledgling contemporaries threw their hands up. Everyone’s capacity to fail varies. Waterston leaned upon her own “blind determination.” More specifically, she finds refuge in the lyrics of a Bob Dylan song called “Last Thoughts on Woody Guthrie.”

Never to think these thoughts and never to let

Them kind of thoughts gain ground

But then again you know why they’re around

By 2012—then in her early 30s—Waterston’s mode of transportation shifted: less an erratic, careening rollercoaster, and more a steady ski-lift, gradually ascending to higher altitudes. In an industry that prizes decidedly young female talent—few big-name actresses break out in their mid-30s—Waterston is not your everyday ingénue. However, building a reputation as an evocative, dynamic actress who could be both serious and playful (often in the same scene), she found more roles starting to come her way. She landed parts in a diverse lot of films, from Paul Weitz’s Being Flynn and Kelly Reichardt’s Night Moves to Ned Benson’s The Disappearance of Eleanor Rigby. With the enthusiasm of Paul Thomas Anderson’s casting director, Cassandra Kulukundis, she landed the high-profile role of Shasta Fay Hepworth, missing ex-girlfriend of protagonist Doc Sportello in Anderson’s 2014 Pynchon adaptation, Inherent Vice. She scored a recurring character on Boardwalk Empire. Throughout it all, she even maintained a presence on stage, playing Anya in Anton Chekhov’s The Cherry Orchard by New York’s Classic Stage Company.

By 2015 she was crossing the line into a different career register, taking a lead role in Alex Ross Perry’s Queen of Earth (which paired her with Elisabeth Moss as two women locked into a tense, jagged friendship) and a key supporting role in Steve Jobs, as Jobs’ embittered ex-girlfriend Chrisann Brennan. Waterston was no longer the impassioned underdog, searching for recognition—though she had trouble shaking off that role, at least in her head. “I identified with that image for a long time,” she says. “The situations where I felt like an underdog were when [moviemakers] were thinking about maybe hiring me instead of a movie star. That’s the dynamic where you’re the scrapper: For some reason—even though they could hire someone who has more box-office value—they’re thinking about you.”

She begins to laugh. “I have a really bad memory, especially about painful events. There’s a chemical that’s released into the brain after childbirth so that women will forget the pain, so they’ll do it again.” Another prolonged pause arrives. “I think that’s kind of true for all pain in a way. We’re designed to survive suffering.”

The good news is, she appears to be suffering less these days. On Alien: Covenant, the actress got to do exactly what she wanted to: “dive into this environment, immerse myself, climb back out in the end, dust myself off, and go do it again somewhere else.” In the film, Waterston plays Daniels, a “terraforming” expert aboard the eponymous colony ship, which lands upon a too-good-to-be-true planet that belies violent inhabitants. She leads a sprawling cast that includes Billy Crudup, Danny McBride, Demián Bichir, Carmen Ejogo, James Franco, Michael Fassbender and Noomi Rapace—the latter two reprising their roles from Scott’s 2012 Prometheus, for which Covenant is a sequel.