From Kabul to Kilkenny: How Nora Twomey’s Empowering The Breadwinner Utilizes The Universality Of Storytelling

Far away from the sparkly castles and enchanted kingdoms where Disney princesses exist, Parvana, a young Afghan girl living under Taliban rule, defies the cruel world around her without a fairy godmother, humorous pets, or elegant dresses.

In Nora Twomey’s The Breadwinner, storytelling is the most vital source of strength for the protagonist. Even when her freedom is bound, the ancestral tales she holds dearly prevail. Dressed as a boy, Parvana risks her life to carry out the most mundane of tasks, and while the film is hopeful, the injustice she must endure is never simplified.

Cartoon Saloon, the Irish studio behind Oscar-nominated films The Secret of Kells and Song of the Sea captivates our eyes with their luminous hand-drawn animation, which stylistically distinguishes Parvana’s real world and the alternative reality where her fantasies come to life. Executive-produced by Angelina Jolie, Twomey’s first project as a solo director is now a strong contender for the Best Animated Feature Academy Award.

Twomey was in Hollywood for the film’s US Premiere at the inaugural Animation Is Film Festival last month, and sat down with MovieMaker to chat about the evolution of Cartoon Saloon over the years, honoring Afghanistan from the project’s inception, and having Jolie’s support.

Carlos Aguilar, MovieMaker Magazine (MM): You were a co-director on The Secret of Kells, and you are now the solo director on this new project. How would you describe the evolution of Cartoon Saloon from that first project to now?

Nora Twomey: Myself, Tomm and Paul have been very close friends since college, and the three of us have always been led by story. With The Secret of Kells, we had the opportunity to make something that didn’t need to hit a certain market, and we didn’t have huge financial pressures on us to mold the story in a certain way. It was certainly our first exploration into creating stories that have deep themes that didn’t necessarily need to conform to a three act structure, where you end up with a happy ending, and everything gets resolved.

We wanted to tap deeper threads in the themes, and certainly Song of the Sea, where I was head of story, was another evolution of that. We were honing our sense of tone, and looking at things like loss, and being able to help children understand loss in a way that was supportive. I went to a talk by illustrator Tomi Ungerer who has spent 60 years creating beautiful children’s storybooks. He said that our jobs as adults and storytellers is not to keep children away from things that scare them, it’s to give them tools to deal with things that can scare them, because children will find something that scares them, whether it’s the shape of a face in the tree branch outside their bedroom window, or something in a book.

You can’t keep children away from things like that, because they need it. It’s in their DNA. They know things are impermanent; they know things can be taken away from them, and we need to find ways to help them to deal with that—especially the world as it is now—when you look at what they’re inheriting from us.

MM: One of the major narrative elements is Parvana’s story world. What does this alternative universe allows you to tackle thematically?

NT: Watching a young girl go through some of the things that Parvana goes through, I wanted to make sure that our audience was always emotionally involved and engaged. I felt that it might be too heavy if we kept in the real world—in Kabul with Parvana the entire time—especially in that one little room that she shares with her family. It was important to me to express things about her character, her ancestry, her storytelling ability, and her connection with her father who wasn’t with her—all of these things I could express through her story world. Her sense of loss—the grieving process that she’s going through for her older brother—these were all things that we could express through the story world.

MM: Tell me about your voice cast and the process of directing performance when you have to elicit actor’s emotions from the inflections in their voices.

NT: I leaned heavily on one of the actors, Kawa Ada, who plays Razaq in the film. He’s an Afghan-Canadian playwright and actor who has done a lot of voice work for radio plays, as well as the screen and the theater. He has a really calming voice. He’s a storyteller himself, and had a huge history of stories in his family. For me, he was a touchstone. He was the dialect coach for the entire recording process, but more than that, I felt that he was such a strong support for the film.

Saara Chaudry, who voices Parvana, was 11 at the time—to be able to go to the places she went with that character with the support of her family—I thought that was wonderful—that you had a larger community of support around that recording studio. It meant that everybody could trust that the vulnerability that they exposed was going to be respected by the production and the story and the resulting film.

MM: This might be the first representation of Afghanistan in an animated feature film. How did you approach the responsibility of represented this culture with authenticity and depth?

NT: When I was initially researching Afghanistan for this film, I realized that it had been set during the Taliban regime—where at the film archive in Kabul, they had bricked up a doorway so that they could preserve some of the earliest recordings and film cans for future generations. People risk their lives for cultural artifacts. In Afghanistan, people have risked and lost their lives for their own families. We wanted to get as many voices as we could for this film that had something to say, whether that was Afghan voices, or voices from around the world. For the score, for instance, Jeff and Mychael Danna hooked up with the Afghan Music Institute in Kabul, and they recorded a girl’s choir there. Every time you hear a little beat of hope in the film, you can hear their girls’ voices. It was important that we had as much authenticity as we could have on that film, but also as much universality as we could. I’m privileged in Ireland to be able to gather the facilities around me and the people around me to make a film like this.

MM: What does it represent for the film to have a big name Executive Producer like Angelina Jolie, who is very involved in humanitarian causes around the world? How does that change the game for a film like The Breadwinner, which is an independent animated production?

NT: She’s just been so incredible. She has been so present as a director and an actor; she’s so famous, I was honestly a little worried when she became involved in the first place. I was thinking, “Is this going to change what we were trying to do with the film?” but not at all. She 100 percent understood what we were trying to do, and supported us all the way from casting—making sure we found intelligent people who had a story to tell.

Our film is about hope at the end of the day, and a celebration of children and young girls, and it was great for her to understand that as much as she did, and to add all the support all along the way. As a female director, having another female director to come on board and put her hand to my back in that gentle but firm way—it was really supportive.

MM: What lessons did you learn from being a co-director on The Secret of Kells and head of story on Song of the Sea that helped you move in the role of a solo director on The Breadwinner?

NT: We animated The Secret of Kells on paper, and that paper was shipped all over the world, from Ireland to Brazil to Hungary. We stretched all of our resources as far as we possibly could. The nature of co-production, when it is physical paper being shipped around the place, was extremely difficult. I always think that if we could do that, we could do anything.

On The Breadwinner, if I wasn’t 100 percent happy with Parvana’s eye direction in a scene, I could ask the animator working out of Luxembourg to submit the scene online. I would be able to work on my computer, write some notes on it, and put it back up there. They would get it back that same day. That kind of immediacy is transforming independent filmmaking. It feels like everyone is in the same room. With video conferencing now, it’s just incredible that you can stay in contact, and in fact even more so than if somebody was sitting right beside you, because it’s much more structured.

It’s not about making the perfect film. All of our films are imperfect, and we’re all imperfect human beings—that’s where the beauty comes from in a lot of cases. It’s about finding people that have something to give on each project. With The Breadwinner, I was really just overwhelmed the entire time by how much people invested in this story.

MM: Are there plans to release the film in Afghanistan, and how significant do you think The Breadwinner will be for young audiences around the world?

NT: The film has been sold in the Middle East and South Asia, where Afghanistan is situated. We are absolutely delighted that it’s going to be translated into Pashto and Dari, which are the national languages of Afghanistan. This animation has so many voices from around the world and is a collaboration of different cultures coming together to tell a story that is both specific and universal at the same time. To have the film shown anywhere in the world, be it Afghanistan or in the Middle East or Australia, it has something to say, and it’s specific to the person that’s watching it. What you bring to a film like The Breadwinner is what you’re going to take away from it, so depending on how open you are, The Breadwinner has the potential to speak to you. MM

The Breadwinner opens in theaters on November 17, 2017, courtesy of GKIDS. 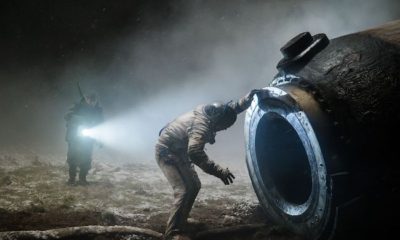