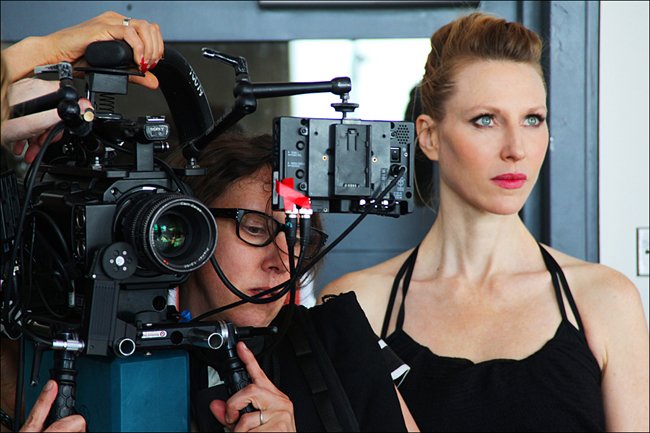 Welcome to Just Crowdfund the $&*# Movie!, MovieMaker‘s new blog where indie moviemaker Jayce Bartok talks about the dos and don’ts of crowdfunding from the trenches of his own crowdfunding campaign. Have a question for Jayce about his movie, Tiny Dancer, or just crowdfunding in general? Ask away at.

It’s been a few weeks since I’ve blogged for MovieMaker, and many of you may be wondering where the hell I’ve been. Well, when you’re trying desperately to make one project happen, that’s usually when the universe (in this instance, the executive producer of my film The Cake Eaters) decides that another project, languishing on the sidelines, suddenly needs to take precedence. That project is “Sunburn,” an ambitious short film Tiffany and I wrote a while back. It concerns a young man who gets a job at a network famous for its reality franchise, “The Manhattan Social Club.” Our protagonist is put in charge of picking a new couple to revitalize the tepid season. But when he decides to use incriminating footage of his subjects in an episode — footage he has sworn to scrap — the couple winds up committing suicide, and the young, suffice it to say, finds himself in a moral quandary.

Over the last month we’ve been working doggedly on “Sunburn,” on a modest, under-$20,000 budget (which might seem huge for a short, but not a short that takes place at a successful network and has a cast of 30 — not including extras — plus a cemetery and numerous other locations in NYC). Tiff and I decided “Sunburn” could be a great, real-market test for our Tiny Dancer scheme. Our theory that we can make Tiny Dancer for the $40,000 we have in the bank is, in the end, still a theory, and making “Sunburn” on someone else’s dime afforded us a real opportunity to see just how far we could stretch each dollar. Could we get the crew we needed? Did we have enough for the equipment we desperately wanted?

Before we even got started, we knew we needed a strong producer to assist us. So we turned to the versatile Patricia Beaury (who produced our friend Gregory Collin’s feature film A Song Still Inside). Patty, like Tiff and I, dove into “Sunburn” thinking this would be relatively easy. I mean, it’s a short, right? WRONG.

We had our SAG-AFTRA documents, our insurance, our awesome camera (SONY F3 courtesy of TCS FILM in NYC) and equipment, our crew, and cast (We hired casting director Lois Drabkin, and did a real casting call — an amazing process for those of you who haven’t done one, yet). So, what could go wrong?

Well, where do I begin? On the first tech scout, our AD (who is allergic) got stung by a bee on the NYC subway (what?!), and our production designer stepped on a rusty nail leaving his loft. Like it or not, pre-production had set a morbid tone for the shoot, and we felt like we were running for our lives.

On day 1, bees and nails fresh in our minds, we arrived at our amazing location (which serves as the film’s network headquarters, run by Doug Rowan, an Andy Cohen-esque character played by the amazing Damian Young of The Comeback fame), only to thrown out onto the street because of an insurance miscommunication. We had our insurance documents, but the location owners hadn’t received the copies we sent. Bye, bye “Sunburn” cast and crew, I thought.

When your AD gets stung by a bee, your production designer gets his foot punctured by a nail, and you get thrown out of your first location before you can call “action,” you’re in a bona fide, trial-by-fire moviemaking nightmare. I was literally fighting back tears as I watched Patty haggle with the building manager. But then I started looking inward. I thought of all the work Tiff and I had put into the project. I thought of my son. And suddenly it occurred to me, “Wait a minute! If we can’t shoot here, where CAN we shoot?”

All our locations were scheduled for specific days (because our friends had donated them). But that didn’t mean we had to scrap the film just because we lost one. We just needed to find back ups and start shooting. It was truly a terrifying and inspiring morning as the whole production team scoured their email and Facebook contacts, searching for a roof location to shoot 4 scenes. Then lo and behold, our lead actor Jack Falahee, sitting in the back of my car as we were driving frantically around the city offered, “I have a roof you can shoot on.” I made a hard right, and off we drove to the East Village.

We raced up his 6-floor walk-up, with $400,000 of equipment in hand, like we were running from the law (which we actually kind of were). When we reached the roof, I jumped for joy. His building, scruffy and dilapidated, was picture-perfect for “Sunburn.” As we started setting up, I looked across the rooftops and saw another small film crew perched across the street from us. It turns out they were SVA students making a music video, and their DP was wielding a 16mm camera. “Take our picture and email it!” one of them yelled. I’ve never felt more at home in my life.

Next week: How Sasha Eden donated her offices and saved our film. Plus: How far does $20,000 really go when you’re making a movie in NYC the semi-legal way?

Jayce Bartok is an actor and moviemaker who runs Vinyl Foote Productions from Brooklyn with his wife Tiffany. Currently, you can see him on USA’s “White Collar” and in the just-released film, Why Stop Now? opposite Melissa Leo, and Price Check both of which premiered at the 2012 Sundance Film Festival. Follow The Independent Collective at twitter.com/ticnyc to stay updated on the Tiny Dancer crowdfunding campaign