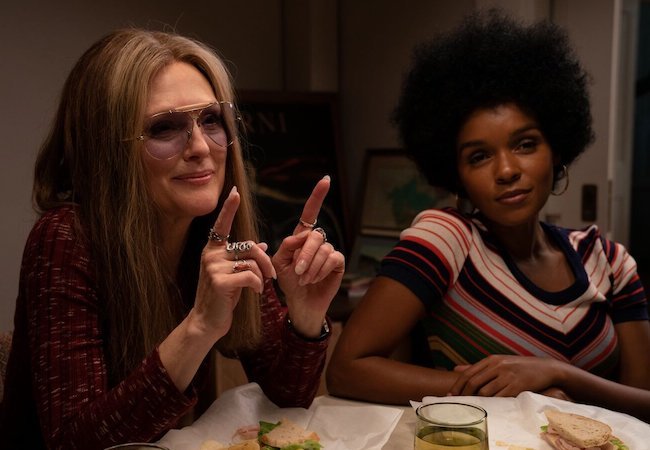 The Glorias, the new Gloria Steinem biopic from Julie Taymor, has an almost shocking approach to abortion: Nothing is polarized. No one is demonized.

Make no mistake: The Glorias, like Steinem, believes strongly in safe and legal abortion. But the film’s face of the anti-abortion movement isn’t a strident bigot, out to deny women their rights. She’s a heroic, Mexican-American advocate for migrant workers, with 11 children of her own.

If you expect The Glorias to be an exhausting checklist of left-wing causes, full of flawless progressives and cartoonish conservatives, you’ll be surprised by Taymor’s nuance. (You can listen to our full conversation with her on Apple or Spotify or above.)

The Glorias advocates for an approach to activism that may seem inconceivable now, and not just because of COVID-19. We see Gloria going out into the world and talking to people who are different than her, even ideologically, and listening to them as much or more as she talks. The film notes that Steinem wasn’t a born public speaker — but was a born listener.

Steinem was a journalist first, and her superpower in the film is her ability to hear people, without judgement, and then persuade them through empathy, respect, and charm. She uses her keen ear to find points of agreement or humor that she can use to change people’s minds.

That’s never more clear than in a segment in which Steinem discusses abortion with Dolores Huerta, played in the film by Monica Sanchez. (Steinem is played by Alicia Vikander in her twenties and 30s and Julianne Moore from her 40s through her 80s.)

Huerta is portrayed sympathetically as a devout Catholic who finds herself awkwardly aligned with conservative activists. Steinem, who had an abortion herself at age 22, makes the case that abortion isn’t anyone’s first choice — but is a necessary legal right.

“The point in the film is… everybody is anti-abortion. And we make that very clear,” Taymor says.

Taymor notes that Steinem dedicated My Life on the Road — the book on which the film is based — to the doctor who cleared the way for her to have an abortion, before it was legal.

“He said to her, promise me two things: One, you will never tell anybody my name. And number two, you will do what you want to do with your life,” Taymor says. “So, of course, this allowed her to fulfill her life. And that’s called pro-life.”

Taymor continues: “I think one of the things that’s always annoyed me about this whole argument is the side that calls themselves ‘pro-life’ always picks the better words. ‘Pro-life’ is stronger than ‘pro-choice.'”

She noted that one reason Steinem was unprepared to have a child was her responsibility to her mother, who was dealing with mental health issues.

“She wasn’t prepared to become a mother, and she never became a mother, in fact, because she mothered her mother, which you get in the film,” Taymor says.

Taymor is the daughter of Betty Taymor, a Democratic activist, and remains immersed in politics. She sees signs for hope in the Biden Administration, and its emphasis on inclusion.

“Kamala Harris as the first female vice president is a gargantuan step in the  direction of gender equality in this country. And along with the numbers of women that Biden is putting into his cabinet a sea change of power is finally taking place. …  The day after the 2016 election, Gloria wrote an article that predicted Hillary’s loss would be part of women’s victories and inspire more women to enter the political fray,” Taymor says. “And she was right. The blue wave of  congresswoman in 2018 and now the numbers of accomplished women entering the arena in high offices is a tremendous achievement.”

The Glorias, directed by Julie Taymor, is now streaming.