Julian Schnabel Paints The Diving Bell and the Butterfly 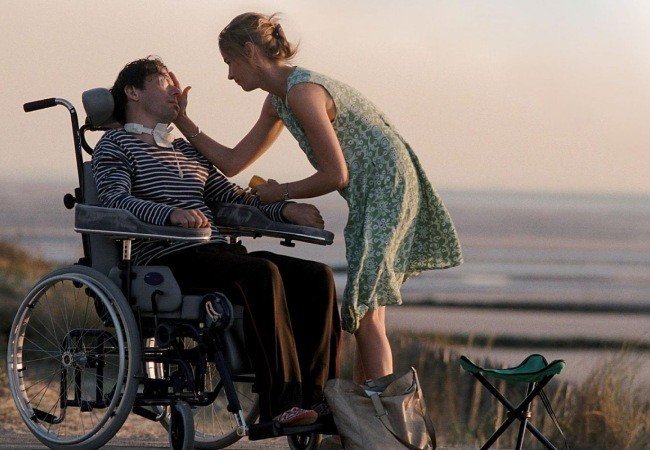 In his latest picture, The Diving Bell and the Butterfly, artist-moviemaker Julian Schnabel returns to familiar terrain while managing to explore a new landscape.

Like his previous outings, Basquiat and Before Night Falls, the film is a biopic—the story of an artist living on the margins of life, searching for his voice. The true story of Jean-Dominique Bauby, one-time editor of Elle France, The Diving Bell brings us deep into the inner life of its main character, a man who, flush with all the trappings of worldly success, is suddenly felled by a debilitating stroke.

Unable to move in any way except to blink his left eye, Bauby’s experience presented Schnabel—a world renowned painter who came to the cinema relatively late in life—with the opportunity to bring a uniquely subjective, stream of consciousness narrative to his audience. It was an artistic challenge that suited the director just fine. “As a filmmaker, as an artist, it was a great opportunity to put whatever I wanted into the structure of the movie,” Schnabel reflects.

Working from a script by veteran scribe Ron Harwood (The Pianist), Schnabel shot almost entirely on location on France’s northern coast at the Berck Maritime Hospital in Pas de Calais, where Bauby—holed up for 14 months—composed his luminous tome. Surrounded by the sights and sounds of Bauby’s medical “retreat,” Schnabel the alchemist could mix and match word and image into a mosaic of his own making.

Phillip Williams (MM): It occurred to me early on that we were going to be with Jean-Dominique Bauby, seeing things from his point of view, for a long time—and I wondered if I could stay with it. But I was with the film to the end. Did you have any concerns about that?

Julian Schnabel (JS): I did think, ‘How long can people take this?’ I didn’t want [seeing the story from Jean-Dominique’s POV] to feel like some kind of a trick. I wanted them to be oblivious, ultimately, and rather than thinking, “We’re not seeing this guy,” to get into what he was seeing. I think that the actresses capture your attention. They’re so good at what they’re doing—so connected to the character and their own interior compassion… It’s very funny, the different intentions you feel from these women.

MM: You feel seduced and comforted by them.

JS: Yes, exactly. You wonder how to make a movie without boring everybody… I think everyone needed to go on a journey with him until he finds his way out of [his physical prison] and that’s when the butterfly shows up.

MM: You withheld the image of your central character for so long. Why?

JS: It happens systematically: First you see what he’s seeing, then you see the inside of his eye, then you see the eye that didn’t get sewn up. You see his feet and parts of his hands and ultimately you see him in a long shot. We felt perfectly satisfied to not see him and see all these other people who were incredibly interesting to watch.
MM: How does your work as a painter dovetail with your work as a director?

JS: I’ve spent my life as a painter, and I guess there’s a whole set of rules [that go with that] about what I want to look at. My goal is to see something I didn’t see before, or invent a new situation for myself, or paint a painting in a way that I didn’t paint before. I’m more tempted not to look at what other [directors] are doing and see what’s residing in my subconscious and find a way to do something that doesn’t have a reference or, if it does, has been obscured by time… It’s not interesting for me to take formal inventions that I’ve seen other people use and incorporate them into what I’m doing. My approach is one I imagine a painter might take.

MM: Do you draw or paint at all as part of your development of a film?

JS: No. There are never any storyboards—there’s never anything like that.

MM: I’m curious as to how you prepare before you step onto the set. From talking to you, I can imagine that you give yourself a certain amount of freedom to find a film as you go along. I don’t mean with forethought…

JS: No, no, it’s true. [But] I knew what kind of lens I wanted to use; the swing and tilt lens, which enables you to be more selective about what part of the image you keep in focus. That gave us a less flat quality. Sometimes when the camera gets put on sticks, I find it very flat. Most of Before Night Falls was handheld—even when the camera wasn’t moving—so you felt like something human was going on, like it was breathing.

MM: With Basquiat, Before Night Falls and again on this picture, you’ve gotten some wonderful, very natural performances. Has your approach to working with actors evolved since you began directing?

JS: It was great to work with Javier Bardem on Before Night Falls, but I think that Javier didn’t know what I was doing sometimes… On this movie I think people were less worried about not knowing what was going on; I think that just happened progressively. You really need [trust], because if people don’t trust you when they’re working with you, it’s hard to trust yourself. You start to doubt what you are doing and then you get depressed and you don’t want to go to the set the next day. (laughs)

MM: Was the trust you felt just given, or have you learned how to gain that?

JS: I always got along with actors. With Javier Bardem, it’s as though we went to Vietnam together and came back with our arms still on. I’ve had great times with actors. It can be tough for the technical crew more than the actors.

[My team] on Before Night Falls were all following their bliss; my first AD, Sebastián Silva, is certainly one of the best there is (his credits include Titanic and Babel). There were a lot of hours and a lot of people, but it was very rewarding. I had people who were willing to put up scaffolding in electrical storms. We shot 60 days in bad weather without stopping once. When it came to The Diving Bell, and I could go home at 8:30 at night, it was relatively easy. I couldn’t believe that I could go to sleep at a regular hour. But the technical part is often challenging.

On The Diving Bell, I think my cameraman was concerned about how much of the swing and tilt lens people could take. (laughs) I’m not talking about the cinematographer, Janusz Kaminski, but the cameraman. Janusz was very helpful—very quick and very good at translating [my vision].

MM: How else have you changed or evolved as a director since your first film?

JS: I think on my first film people tried to keep me from hurting myself… and I don’t think that helped. (laughs)

MM: Trying to keep you from producing something that wouldn’t work?

JS: Yes. For example, I wanted to change lenses for one particular shot because we didn’t have room to push forward or pull back, so I wanted it so that in one shot you see the head of a guy at a certain scale but with the next one you just see it much closer. My DP tried to give me a lens that was similar to the one I had just used. You know, people don’t necessarily know what you want because they haven’t done that before. They’re using their experience to help you, but maybe that’s not really what you need.

MM: Sometimes well-intentioned help can get in the way.

JS: Yes. Sometimes I talk to young painters and when I see things that look too general I’ll say, ‘You know, it looks like anyone could have done this.’ I look to see what’s personal to them. The idea isn’t just to make it personal, but to at least not be so accepting [of conventions]. When you are starting out, people will tell you, “There’s this kind of shot and there’s that kind of shot.” As you start writing for film, you start to understand what will play and what won’t. You start to understand what is being said to you when you look at a script.

MM: You find it yourself.

JS: Yes, but I dread directing… It’s like something I know I’m going to have to do, but it’s very arduous in contrast to painting.

MM: What would you say to students if you were teaching film?

JS: It’s the same, whether you are making film or art: People should make movies about what they know about. Most people don’t know what they’re making the movie about, so there’s a blandishment that’s implicit in the job. They know how to make a movie, but they don’t necessarily have a deep relationship with the subject matter of that particular movie. They might not have the same relationship as perhaps the writer had with the subject. I think you have to always be rewriting the script while you’re shooting.

MM: That’s a challenging answer. Is there not a sort of tension between the industrial part of the process of moviemaking and the creative one? If you’re continually rewriting and reworking—which from an artistic point of view is beautiful—you also might get to the end of the day without your coverage.

JS: All I’m saying is: Say you’re shooting in Mexico, and it’s raining, and the river rises up 15 inches: Your location’s not there anymore…

JS: So, somebody who might be writing can say, “Everything I wrote no longer means anything because I don’t have the stuff that I needed there.” As a plastic artist I can say, ‘I don’t have to do that there; I can change this for that.’ I’m not actually saying you necessarily write anything, but you do have to throw the script away a lot of the time, and you throw the script away for something better—or don’t throw it away. (laughs)

On the one hand, it’s very nice that you have a community of people who are working [to make the film], but when it comes down to it, you have to trust yourself. If you try to please everyone else, you’ll have a movie that will be what they want, not what you want. It’s like with your kids: If you’re happy, then your children will be happy; if you’re miserable while you’re doing what everyone else wants you to do, no one will be happy. MM