How They Did It: To Shoot The Mutineer in 35mm, the Director Took a Scalpel to His Ultra-Low Budget

In 2012, I wrote down the first idea I had for The Mutineer, with the intention of shooting it the next year on black-and-white 35mm film. My idea, loosely based on true events, was about a group of characters, fleeing a gun possession charge, who take over a farm in rural Appalachia and try to secede from the U.S. Five years, 45,000 feet of film, 62 rolls, and one humbled ego later, I finished the film. Here’s how we did it.

I’m sure it was, and always will be, more expensive to shoot film than digital. We were on the SAG Ultra Low Budget agreement for a rough reference point, though I’d estimate that about a quarter of our budget was dedicated specifically to shooting on film. I ended up spending a couple of years raising the money for this film and at a certain point it came down to waiting longer to raise more money or making sacrifices elsewhere in our budget so we could still shoot film. Some of the sacrifices I made were perhaps against my better judgment, but were ultimately the only way we could do it.

A significant cost-saving measure was shooting the film myself. I’ve always shot my own films since I was young, though it’s never necessarily been an aspiration of mine to do so. I was already familiar and comfortable with these cameras and it ended up being an economic decision I made to shoot it myself. A big qualification bears mentioning here: I had an excellent gaffer, Josh Kubizne, who was instrumental in lighting the film.

Aside from not hiring a director of photography, we just generally took a scalpel to the budget. Crew-wise, we only hired those positions that were absolutely necessary—i.e. without any of them, the film couldn’t be made. For example, we didn’t exactly hire an art department. I handled most of the set design and construction myself (along with a lot of help from other members of the cast and crew). The tiny crew size made the shoot very challenging to everyone and tensions were high. For example, our set “matriarch,” the Production Manager, Jocelyn Meehan, raced around set the entire production like a madwoman and it was clearly evident we wouldn’t have survived without her. However, we developed a general camaraderie with the cast and crew, who often pitched in to tasks outside of their job descriptions. (This wasn’t necessarily asked of them, but it ended up getting us through the shoot.)

We also saved on lodging by staying in the vacant dorms of a college campus that was just 10 minutes from our set, plus we got catering at wholesale prices from a local restaurant. Finally, the production qualified for the West Virginia film tax credit, which helped us in post-production.

Rehearse With Your Limited Film Stock In Mind

It’s sometimes argued that you tend to shoot less footage on film than you would otherwise with digital. There may be some truth to this, but I also think that a production is more constrained by its schedule than its shooting format. That is, even if we wanted to shoot more footage, I’m not sure we would have had the time. Either way, the abstraction of a limited quantity of film stock was always on our minds, and we made a concerted effort to be very careful with the shots we chose and the content of those shots with the acting. For almost every scene we shot, we had a rehearsal period with just myself and the actors to make sure we fully explored the scene (or to the extent that the schedule would allow), until we were ready to bring in the camera. Though, when working only with the non-professional actors, I found it better to shoot in a more “documentary” style rather than do a heavy rehearsal. I gave them more room for improvisation and encouraged them to be themselves on camera.

When Traditional Playback Fails, Find Other Solutions For Viewing What You’ve Shot

Another thing that bears mentioning is the fact that these cameras didn’t have a video out, so we couldn’t see what we were shooting on a monitor, but relied completely on the optical viewfinder (OK, we did have a video tap on one of the cameras, but it was a very low resolution black-and-white image that was useless except for framing when doing steadicam work). Our gaffer Josh Kubizne used a Canon 5D DSLR on a black-and-white display setting to get a general idea of the lighting ratios in the scene. We knew the film had much more latitude than what the 5D LCD screen was showing us, especially in the highlights, so we kept that in mind as we went.

We push-processed the film for the interior scenes (the ORWO N74 Plus stock has a base rating of 400 ASA daylight, and we rated it at 640 ASA, shooting with HMIs), allowing us to use less lighting. We also didn’t get any footage back from the lab until midway through our first shoot—about two weeks in. So we really weren’t positive what we were getting on film. It sounds crazy, but we ended up with almost no technical or other issues that would have required us to reshoot scenes or shots. There’s an odd excitement in just trusting the image you’re capturing onto film, to rediscover it when you get the footage back from the lab. Of course, that trust was built from the experience of past shoots on film.

The Problems of Shooting on Film

The production wasn’t without its misfortunes. Some had nothing to do with shooting on film, like having to fire one of the actors the first week of production and find an emergency replacement. Also, two of the non-professional actors literally threatening to kill each other… sort of standard fare like that. 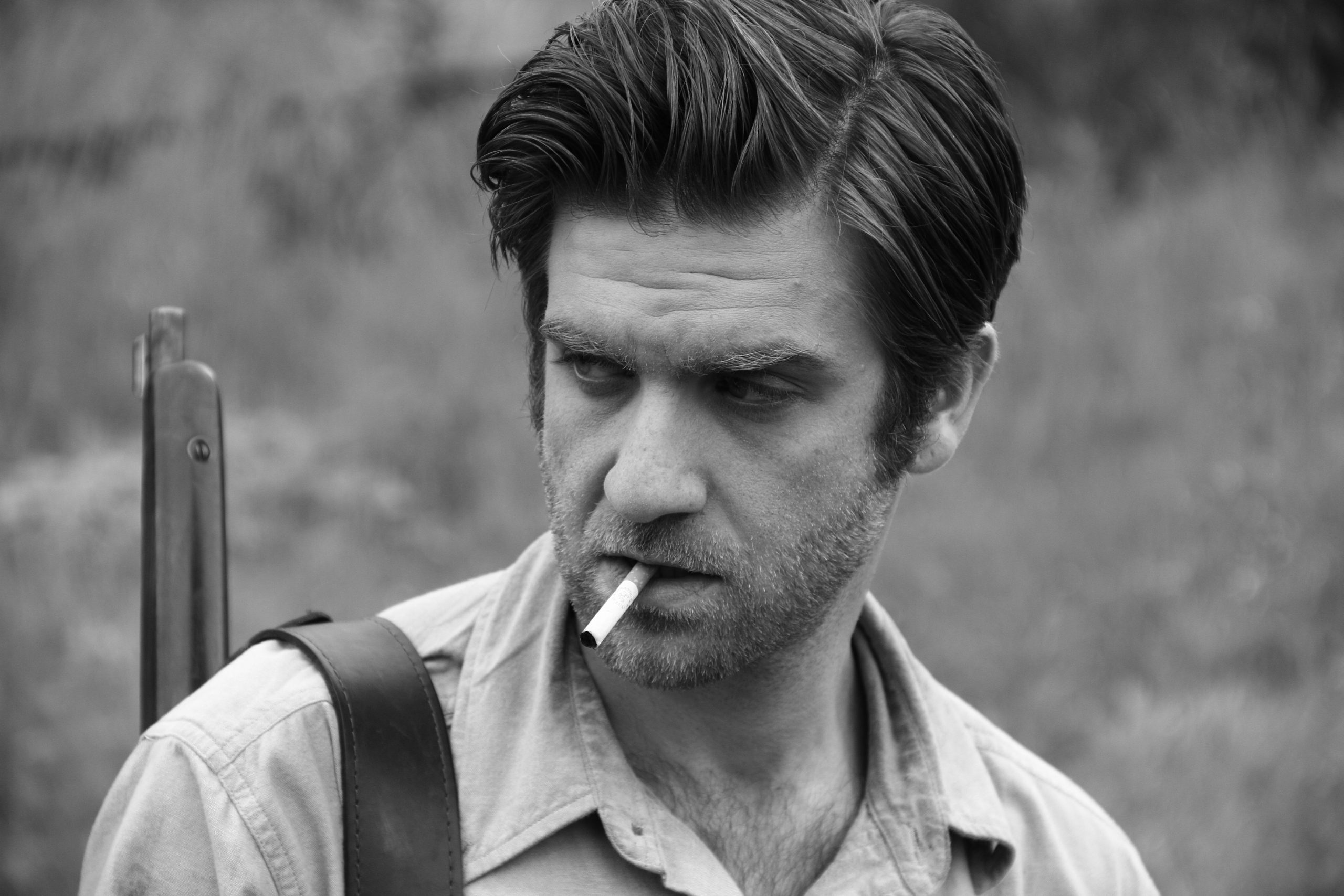 Harris Doran as Lowell in a scene from The Mutineer

Some, though, were a result of shooting on film. “Shooting ratio” may be a term less in use now with digital, but it’s the ratio of total footage you shoot to the amount that’s used in the final film. When shooting on film, you need to figure this ratio out in pre-production so you know how much film stock to budget/order. Our budgeted ratio was based on past shoots I had done, though we ended up going over that ratio for a number of reasons. First, this film was more dialogue-based than ones I’ve done in the past, so we had more close-ups and got more takes of those close-ups. Second, there’s relatively many characters in the film (most scenes have at least three characters in it at a time), thus requiring more coverage. Third, we shot a couple scenes we ended up cutting. Those scenes should have been cut in the script stage of course, but some of this was footage of the fired actor, and was obviously unusable and needed to be shot a second time. Our film loader, Stefano Ceccarelli, kept me well informed about the amount of film left, though his reports became more and more anxious as time went on and it was obvious the stock wouldn’t sustain the rest of the shoot.

I tried putting in an emergency order to ORWO for more film, though the amount of time it would have taken to reach us in rural West Virginia would have been over a week. Looking at our funds, we just didn’t have enough for both the additional film stock, and the additional time waiting. I had to make the call to shut the production down. I knew we would end up finishing it at some point—and as soon as possible—but the decision was met by a range of reactions from the cast and crew, from anger to tears. It was obvious everyone cared about the film and wanted to see it through to the end.

In the next months, I was able to raise the funds needed to finish the production. Ultimately, I think there was some benefit to taking the time off between shoots. It allowed us to reassess everything and come back fresh. There was a much more positive mood in the second shoot; the stress had definitely diffused in the time between.

Though, our troubles weren’t over. One day on set during our second shoot, our main camera stopped working. We troubleshot all the things one would do with a film camera, though it was obvious something was broken or needed to be replaced. Our location was in the northern panhandle of West Virginia and we were within a day’s drive of both Visual Products (a camera repair shop) and The Camera Department (a rental house with film cameras), both in Ohio. Rather than risk the unknown amount of time it would take to get the camera repaired, we decided to rent a replacement camera. I was getting ready to drive in the middle of the night to pick up the camera first thing in the morning when they opened, but thankfully two of our PAs offered to drive, which allowed me to keep working on set. Now, I should mention we did have a second camera already, but it was an MOS camera (the Arriflex 35IIC). That is, the motor noise is quite loud and it’s not meant for sound recording. So, we were still able to shoot non-dialogue scenes while waiting on the replacement camera.

A scene from The Mutineer

If You Love Shooting on Film, Don’t Waste Time Justifying It

In the end, of course, we finished the film. Now, the purpose of this article is about how we shot on 35mm, not why, so I won’t dwell on a justification for shooting on film. The problem with such justifications from a visual standpoint is that they’re entirely subjective—after all, we’re talking about aesthetics. The fact of the matter is, I personally have a strong preference for the look of an image shot on film, and that’s justification enough for me. And aside from the end result of shooting formats (which admittedly is all that should matter) there’s an experiential process of shooting on film that I just haven’t found equaled in shooting digitally. There’s just nothing thrilling to me about handling a box of circuits. On the other hand, I find the operation of a film camera exhilarating—hearing and feeling the film running through the camera, fusing the reflected light from the scene forever to the strip of celluloid in a latent image. I’m just generally fascinated by the mechanical nature of a film camera—like the mechanics of a watch or a motorcycle. Perhaps mechanics are the last throes of 20th century technology and should be abandoned and replaced by electronics in the name of progress. If so, I remain firmly rooted on the wrong side of technological history. And despite the extra work, I can assure you, my next film will be on film. MM

The Mutineer will be available on iTunes, Amazon, Vimeo On Demand, and DVD/Blu-ray October 17, 2017, courtesy of Blackbird Films.

How They Did It: The Te Ata Director on Taking Cues from the Chickasaw Nation and Respecting Their Legacy
How They Did It: Shooting A South Florida Short Film, "Chasing Titles Vol. 1," In Nasty Weather With AK-47s