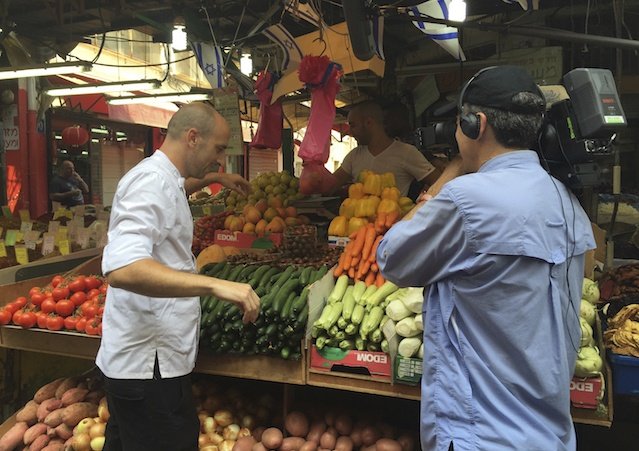 In Search of Israeli Cuisine is a portrait of the Israeli people told through food. Depending on how you count, Israel has some 150 cultures that either came to Israel or never left.

Those cultures—French, German, Russian, Lebanese, Turkish, Greek, Libyan, the list goes on and on, as well as Jewish, Arab, Palestinian, Christian and Druse, and their particular foods, are among the main reasons Israel has the hottest food scene in the world. People are surprised to learn you can’t get into restaurants in Tel Aviv; it’s like in New York, San Francisco, Paris. There’s a different microclimate every 10 miles, so amazing fresh vegetables are available all year round. Choosing a representative number of people to profile from a variety of traditions was a challenge. I knew there was no way I would be able to highlight every culture, not even close. I wasn’t making a travelogue, and story is always key. Plus, new restaurants and food stands are popping up faster than any place I’ve ever been. How to represent many cultures and tell a compelling story kept me up at night. We shot at over 100 locations all over Israel and actually have an hour and a half of finished scenes that didn’t make it into the film.

For me, flexibility is key to making good, possibly great films. For example, I don’t use hosts; they come between the passion of my subjects and the audience. In Search of Israeli Cuisine posed a new set of challenges in that department and it took a while to figure out that I needed to team up with someone who understood the complex history of the country.

A friend insisted I go to Zahav in Philadelphia to eat the best Israeli food in America. That’s where James Beard Award-winning chef Michael Solomonov presides. I never thought this meal would be the turning point. My wife and I were blown away by the experience. This wasn’t just great Israeli cuisine; the food, service and ambience was as good as any top restaurant in the world. After a few courses, Mike sat down with us and in 10 minutes I knew I had my chef/guide. I don’t call him a host. He never does hosty things, like saying, “Now we’re going to this restaurant, where the chef serves blah.” I’m dozing off even as I write that sentence. No, I put Mike into situations. No walking down the street… OK, he does in the very first scene of the movie, but not again. The audience finds him sitting at a table with a chef or in a home cook’s kitchen, chopping, slicing, getting his hands in it. They chat, it’s natural, he’s immersed in what they’re doing – that’s what captures viewers’ attentions. Being flexible means I always try to be ready for something unexpected; that’s when the magic can happen. In an early scene, Mike is cooking with Ruthie Russo, a young, dynamic, chef/journalist. They make her grandmother’s Turkish eggplant with ground lamb. She and Mike brown the lamb, prep the eggplants, all the while talking about food traditions. They acknowledge that they can’t truly re-create their grandmothers’ recipes. Taste memories will always be better than what we create today. Then Mike tells Ruthie about his grandmother’s famous burekas. He surprises me when he says he had her burekas on the menu at Zahav, but took them off when she died. “I didn’t want restaurant people coming in and judging it,” he said. At that moment I knew that I had to break my rule and film one scene outside of Israel. We cut from Ruthie’s kitchen to Mike rolling out dough in Zahav—close-ups of thick gobs of butter, rolling pin, Mike’s tattoos. He tells us that the burekas were the way he and his grandmother seemed to communicate since she didn’t speak English and, “My Hebrew was terrible.” He describes a pretty bad time in his life: He’d dropped out of college in the states, returned to Israel and felt he was basically unemployable. One day, walking down the street, he passed a bakery that had “trays and trays of burekas, these burekas that my grandmother cooked for me.” He went in and got his first job in the food world. And, the rest, as they say, is history. Had I stuck to my rule that the entire film had to be shot in Israel, I never would have captured such a touching scene. It also comes at the beginning: We learn a lot about Mike and how he’s struggled and developed, which draws viewers into the journey we’re taking them on.

The shooting style of In Search of Israeli Cuisine is what I call orchestrated cinema verité. Mike and I discuss a scene and then I let him go, occasionally moving the conversation one way or another, but mostly leaving it be. When we filmed the chef/baker Erez Komarovsky making shakshuka, the traditional Israeli/Palestinian egg and peppers breakfast, Erez asked Mike if he likes it spicy. Mike replied affirmatively, so Erez loaded it on. A bit of macho competition? Neither are blustery personalities but they are famous, guy chefs. When Erez tasted the shakshuka, it was so hot he couldn’t speak. We kept rolling even as we saw the state he was in. Mike made fun of them both, vamped a bit until Erez recovered. The misstep created a wonderful, if painful moment. A perk of doing a food film is after shooting the crew gets to sample the meal. I like hot foods, but I didn’t dare try Erez’ shakshuka. I had a whole day of filming ahead of me and didn’t want to risk having my head blown apart.

Of course, Mike and I didn’t always agree. He was born in Israel, grew up in Pittsburgh, goes back a few times a year and eats about eight meals a day when he’s there. He really knows the country and its cuisine. His job was to suggest great places and then dive into any given moment. My job was to keep the big picture in mind: How can one scene lead to another, how can this restaurant scene be different from the previous one that had Mike sitting at a table with the chef? Were the stories very different? If so, how could we shoot them differently? We simply couldn’t visit two similar Moroccan restaurants, even if they were both off-the-charts fantastic.

Actually, those were the easy decisions. Filming Shmil Holland, a religious, kosher tour guide in Jerusalem, who was going to make kugel, was a challenge. Mike doesn’t like kugel. So, when he heard that we were filming a kugel scene, he balked big time, lobbying hard to shoot something else with our precious time. But I was thinking about diversity. The film needed more kosher scenes and Shmil is a great guy. I put on both my producer’s and director’s hats, insisted, and on we went. Mike’s mood got worse when we arrived and learned Shmil boils his noodles in milk for half an hour. He wanted to bolt. Too late, there was no escaping. Mike is always gracious and caring. Once he met Shmil, he instantly warmed up and threw himself into the scene without reserve.

When the kugel came out of the oven, it was remarkable. Mike loved it so much he actually put kugel on the menu back at Zahav—not Shmil’s, his own version. And, the crew wolfed down that kugel before you could say “Jerusalem.” MM

Roger Sherman is a founder of Florentine Films. He produced, directed, photographed and wrote In Search of Israeli Cuisine. His films have won an Emmy, a Peabody, a James Beard Award and two Academy Award nominations.

In Search of Israeli Cuisine opens in NY on Friday, March 24 at the Angelika Film Center & Lincoln Plaza Cinemas (where filmmaker Roger Sherman & chef Michael Solomonov are scheduled to do Q&As on opening weekend), and then nationwide beginning March 31, through Menemsha Films. Photos courtesy of Florentine Films. For more info go to: https://www.menemshafilms.com/israelicuisine and http://www.israelicuisinefilm.com

Of Tacos and the City: In Laura Gabbert’s City of Gold, L.A. is Most Beautiful Through Jonathan Gold’s Eyes