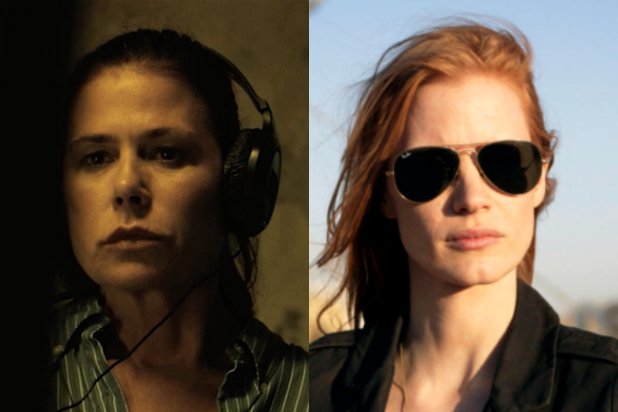 And yet both characters seem to be loosely based on the same CIA terror expert, a woman once dubbed “The Unidentified Queen of Torture” by New Yorker writer Jane Mayer. The Report offers several clues that suggest this is the case. They are detailed below.

Neither Zero Dark Thirty nor The Report presumes to be the last word on the mysterious expert. Both the Jessica Chastain character, Maya, and the Maura Tierney character, Bernadette, are composites who have some commonalities and some differences with the real woman. (Bernadette is a supporting character in The Report, which is directed by Scott Z. Burns and stars Adam Driver as real-life Senate investigator Daniel Jones.)

Also read: Mr. Rogers Wasn’t a Navy SEAL, But the Beautiful Day in the Neighborhood Writers Know Where That Myth Started

The CIA has never released the real woman’s name. And she is also not named in the Senate Intelligence Committee’s report on the CIA torture program that is the subject of The Report.

But the week after the Senate released the report in December 2014, NBC News reporter Matthew Cole noted her extensive involvement in the CIA program, and linked her with Zero Dark Thirty.

“The expert—one of several female CIA employees on whom ‘Maya,’ the lead character in the movie Zero Dark Thirty, was based—has previously been identified in the media as a CIA officer involved in the rendition program,” Cole wrote.

Mayer’s New Yorker story similarly says that the expert was “in part, the model for the lead character in Zero Dark Thirty.”

Zero Dark Thirty was released in 2012, two years before the Senate report was released. The report detailed far greater use of CIA “enhanced interrogation techniques” than was previously known, and detailed grim practices such as waterboarding, sleep deprivation, and rectal feeding.

Some critics argued when Zero Dark Thirty was released that it incorrectly indicated that the CIA’s “enhanced interrogation techniques” helped the agency locate Osama bin Laden, which in turn enabled Navy SEALS to kill him.

Maya, Chastain’s character in Zero Dark Thirty, is portrayed as a relentless and sympathetic agent who must overcome bureaucracy and ineptitude in a rough-and-tumble, male-dominated agency to help locate America’s most hated enemy by any means necessary.

In contrast, The Report, which draws heavily from the Senate report, portrays Tierney’s Bernadette as a bureaucrat who misses warnings and allows inhumane treatment that yields little information of value.

The dramatically different presentations of Maya and Bernadette show how significantly just a few years can affect a cinematic interpretation of a real-life figure, especially in a time when ripped-from-the-headlines stories make their way to the big screen with remarkable speed.

Here are the clues in The Report that Tierney’s Bernadette is based on the CIA expert who helped inspire Chastain’s Maya:

-Cole wrote in 2014 that “the expert… participated in ‘enhanced interrogations’ of self-professed 9-11 mastermind Khalid Sheikh Mohammed.

In The Report, the Bernadette character is on-site for a brutal interrogation of Mohammed that includes waterboarding.

-Cole wrote that the expert “witnessed the waterboarding of terror suspect Abu Zubaydah.”

In The Report, Bernadette witnesses Zubaydah being shaved, roughed up and waterboarded. She is the only woman present.

-Cole’s story says the expert has been described as part of the Alec Station, “the CIA’s name for the bin Laden unit.” Cole also said her name was redacted from the report “at least three dozen times” to protect her identity.

Cole also wrote that at one point the expert was “criticized after the 9/11 terrorist attacks for countenancing a subordinate’s refusal to share the names of two of the hijackers with the FBI prior to the terror attacks.”

-In The Report, Driver’s Jones references “an officer from ALEC Station mentioned 41 times” in the report, while arguing against redacting her name.

He then argues that she missed a potential opportunity to prevent the 9/11 attacks, saying: “In 2000, she was made aware of two Al Qaeda operatives who arrived in Los Angeles. FBI officers, working within the bin Laden unit, requested permission to investigate.”

Cut to Bernadette saying no to the FBI: “That’s not how we want to play it,” she says.

Cut back to Jones: “The CIA knew they were on American soil and didn’t do anything.”

When the report was released in 2014, then-CIA Director John Brennan said it provided an “incomplete and selective picture of what occurred.”

“As an agency, we have learned from these mistakes, which is why my predecessors and I have implemented various remedial measures over the years to address institutional deficiencies,” Brennan said.

In an interview with The Daily Beast, Maura Tierney was asked about speculation that her character was based on current CIA Director Gina Haspel. Tierney said she wasn’t told to base her character off Haspel, and didn’t do so.

The Report notes that many CIA employees involved in the torture program were promoted afterward. One of them was Hapsel. So was the expert, according to Cole’s 2014 NBC News story.

At the time Zero Dark Thirty was released, screenwriter Mark Boal told The New Yorker that the film was “not a documentary,” adding: “We’re trying to make the point that waterboarding and other harsh tactics were part of the C.I.A. program.”

Bigelow added that “the film doesn’t have an agenda, and it doesn’t judge. I wanted a boots-on-the-ground experience.”

At one point in The Report, Jones glances up at a television screen showing the title of Zero Dark Thirty, but expresses no opinion.

The Report is now streaming on Amazon Prime.