The Irresistible Lure of the Heist: From Baby Driver to Logan Lucky, Why Do We Return to This Classic Genre? 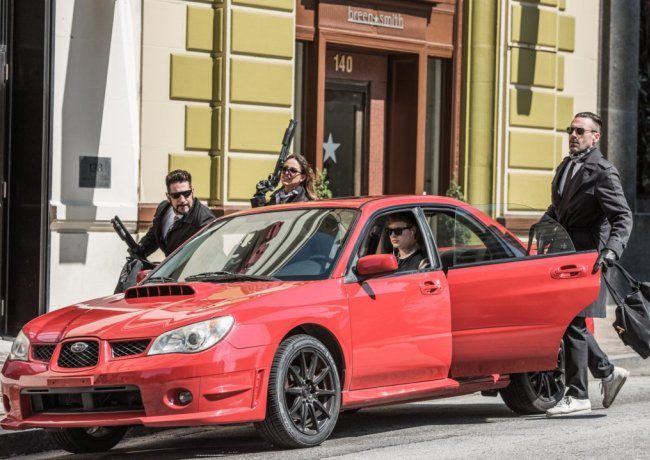 Looking for a summer getaway? You may have to steal it.

A couple of high-profile heists have promised summer pleasures this year. Steven Soderbergh, an old pro at the genre, returns to feature directing with the NASCAR-driven, self-described “hillbilly heist” Logan Lucky, while Edgar Wright’s kinetic Baby Driver has already delighted audiences with its musical stylings. The social-security-sucks-so-let’s-hit-a-bank Going in Style (a remake, by Zach Braff, of the 1979 hit) grossed a decent $81 million worldwide this spring.

And there’s even more on the way. Women will break into the traditionally virile world in Ocean’s Eight early next year (starring Cate Blanchett, Helena Bonham Carter, Sandra Bullock, Rihanna and more), and also in British auteur Steve McQueen’s upcoming Widows, led by Viola Davis. Meanwhile, Robert Redford brings back some of the swagger of The Sting and Butch Cassidy and the Sundance Kid in David Lowery’s upcoming The Old Man and the Gun, based on real-life heist genius Forrest Tucker.

“A lot of crime movies that I really like have a strong ‘crime doesn’t pay’-type moral kicker at the end. Baby Driver starts with a dream of being a getaway driver and the nightmare of being a criminal starts to creep in,” Wright said. The three-part structure of his new movie was also indebted to some of its predecessors: “the idea that there were revolving cast members in each gang. I could have three heists, and each had a different combination of crews. For each heist, the stakes got higher and the decisions that the characters had to make got tougher.”

The point is: The heist movie has been one of the Dream Factory’s staples for a long time. But why?

Across its history the heist has been as hit-and-miss at the box office as some of its characters have at robbing banks. But for the last 20 years, it’s had a pretty good screen run. When it does hit its mark, it mixes the diversions of a gritty gangster or war flick, a tense spy thriller, a con-man or buddy movie—even a puttin’-on-the-show musical. (Now, if only it could deftly steal a little eros from the romance genre; no offense to the masculine world of Michael Mann’s taut procedurals, yet the job is often about a girl but not for the girl.)

What exactly are the enduring qualities of the heist? The genre reaches back at least to Edwin S. Porter’s foundational Western The Great Train Robbery (1903) and Depression-era gentleman thief or gangster films like Raoul Walsh’s High Sierra (1941). But it found its purpose in a nebulae of black-and-white thrillers (and a couple of comedies) that added the heist to a constellation of B-lot noir brilliance in the 1940s.

With international flair, it was born a transnational genre. Borrowing the spectacular modernist montages and double-cross narratives of the German and Jewish moviemaker Robert Siodmak, who escaped to Hollywood in the ’40s (Criss Cross, The Killers), and coming of age in the social justice and working class sympathies of John Huston (Asphalt Jungle), the heist folded a noir tradition with German expressionist and French poetic realist pedigrees into smart Hollywood concoctions. It crossed the Atlantic for capers in the U.K., as Charles Crichton’s The Lavender Hill Mob (1951) and Alexander Mackendrick’s The Ladykillers (1955) translated noir into Ealing Studios comedic intelligence. The same year war veteran Sam Fuller was shooting House of Bamboo on location in Japan (1955), the heist was ensconced on the Continent by Jean-Pierre Melville’s magnificent Bob le Flambeur (1956) and the blacklisted American Jules Dassin’s brilliant, brutal Rififi (1955)—the latter soon parodied in Italy by Maro Monicelli’s Bid Deal on Madonna Street (1958). These high-profile heists only hint at the rapid individuation of this screen lure during the first years of post-war globalization—and the heist’s social purpose as a vehicle to think about the winners and losers in a new world system of capital flows, changing values and disrupted societies.

The heist is nimble. Its basic elements provide flexible story lines and structurally complex human networks. It’s an actor’s paradise, a play within the play, roles wrapped within roles in con games and double crosses, often in ensemble casts. Crime sells, so it’s a studio’s dream. And it’s a director’s secret weapon, a vehicle for expressing dissatisfaction with studios that constrain artistic prowess, allegorized through genius criminals who fool the system.

Crime sells, to be sure, but why else would so many directors try their hand at it? Joel and Ethan Coen, Albert and Allen Hughes, Stanley Kubrick, Spike Lee, Barry Levinson, David Mamet, Frank Oz and Guy Ritchie all have wanted a piece of the pie. If it’s comfortable in the realm of thrillers, it shifts easily between the comical and tragic, between rural bank jobs (last year’s Hell or High Water) and sleek Wall Street fine art forgeries (The Thomas Crown Affair), even fanciful urban documentary (2008’s Man on Wire).

And, in every case, it’s a confidence game, social commentary masquerading as diverting entertainment.

Heist movies are about a lot of things. They’re about process, plans and precision—particularly those “best laid plans” that never fail to go awry. They’re about the coup itself, pulling off the perfect caper, and the stark beauty of failure (to wit: Stanley Kubrick’s The Killing). They’re about balletic teamwork and the social cohesion of the crew that faces tremendous obstacles but also internal strains from race, class and political difference. Look no further than the race and civil rights tensions raised in Odds Against Tomorrow (Robert Wise, 1959), The Split (Gordon Flemyng, 1968), Dead Presidents (Albert and Allen Hughes, 1995), or Inside Man (Spike Lee, 2006). In one sense, heists are utopian, constructing a marginalized micro-society of misfits. (Where else could the Malloy brothers from Provo, Utah find a home but in Danny Ocean’s team?) They’re about gambles and risks, unfolding in places where risk-to-profit ratios are extreme—racetracks and casinos—or utility-to-investment seems outlandish—jewelry stores and art collections. Which is to say, they provide clever parables for criticizing the vicissitudes of capitalism writ large, the world of global finance that touches rural Texas in tales of economic blight and loss as well as China.

The heist accrues value in times of economic and social instability. It’s about the money, only it’s never about money. It values the tenuous bonds that tie individuals and small groups together when they are under social and economic duress, appealing to a sharpened sense of social inequities between the haves and have-nots. It re-imagines that complex of values that underwrite society—love, friendship, honor, loyalty and diversity against pure economic greed. So, in addition to providing the pleasures of any well-made genre film by a skilled practitioner, one of the genre’s enduring appeals lies in wish-fulfillment: It offers social and economic alternatives to the status quo.

To Read More on the Heist Genre

Daryl Lee teaches French literature and film at Brigham Young University and is author of The Heist Film: Stealing with Style (Wallflower, 2014).

Of Bad Apes and Twisted Revenge: Matt Reeves, Steve Zahn, Weta Digital and Others on War for the Planet of the Apes
Going In Blind: How the First Legally Blind Person to Write, Produce, Edit, Direct and Star in a Feature Built His Career