Is The Irishman a True Story? Does It Matter? 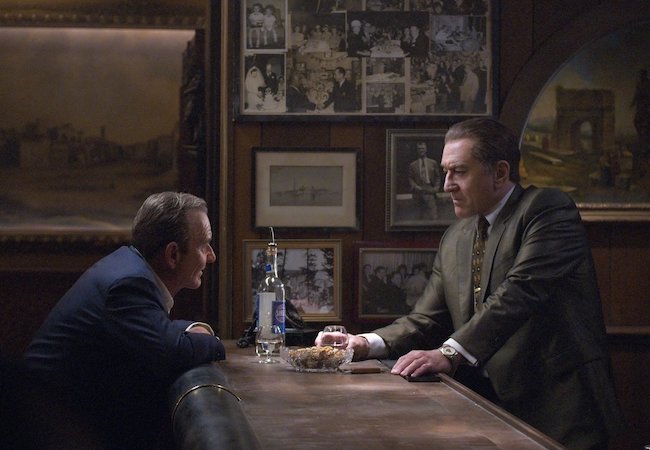 Frank Sheeran, the mob enforcer Robert De Niro plays in The Irishman, isn’t anyone’s idea of a believable narrator. He’s an admitted criminal with a serious drinking problem who, when we meet him in the film, is in serious physical and perhaps mental decline.

So how seriously should we take his accounts in The Irishman, which are taken from the real Frank Sheeran’s real statements to author Charles Brandt for the book I Heard You Paint Houses? The film is nominated for 10 Oscars, including Best Picture, and in past years, rival nominees have used whispering campaigns about accuracy to kneecap the competition.

That doesn’t seem to have happened with The Irishman, in part because director Martin Scorsese and star-producer De Niro have acknowledged that their source material has been challenged in the past — and because almost no one knows what really happened to Jimmy Hoffa. The creators of the film haven’t altered established facts. They’ve provided one theory on what the facts are.

I Heard You Paint Houses  purports to solve the mystery of who killed Jimmy Hoffa, and The Irishman also offers up an interesting theory about who killed JFK.

There’s little question The Irishman is historically accurate in its portrayal of Jimmy Hoffa’s influence over the Teamsters union, his hatred of Bobby Kennedy, and his legal issues. What’s disputed, and has been disputed since Hoffa’s bizarre disappearance in 1975, is how he disappeared — and who made him disappear.

Because The Irishman is told mostly from Frank Sheeran’s perspective, it’s possible to make the case that Scorsese, De Niro and writer Steven Zaillian aren’t necessarily endorsing his claims about what happened to Hoffa, just presenting them.

There’s also a case to be made that Scorsese set out to make a film about friendship, aging and regret, and not a documentary. And even when Scorsese does make a purported documentary, as he did with this year’s Rolling Thunder Revue: A Bob Dylan Story, the celebrated director playfully manipulated the truth, making no secret of his poetic license.

Maybe The Irishman‘s complex relationship with the truth—and the question of whether memory and truth are the same—makes it the perfect movie for a 2020 in which everyone constantly questions everyone else’s facts, from the news media to the president. (Scorsese has said President Trump’s influence hangs over scenes in The Irishman in which “you can see how pressure is applied, how things are said but not said.”)

And all stories ask for our willful suspension of disbelief, but The Irishman goes further than most, using state-of-the-art CGI to let us pretend that the three septuagenarian leads, De Niro, Pacino and Joe Pesci, are decades younger.

Almost all movies based on true events make things up for the sake of telling a good story. Richard Jewell was criticized — and perhaps mostly shut out of awards season — because of a single scene in which a female reporter trades sex for information. Her former newspaper says there’s no evidence it happened. The lead character in A Beautiful Day in the Neighborhood, Lloyd Vogel, is a fictionalized version of real-life writer Tom Junod. The Aeronauts replaces a real-life aeronautics hero with a fictional heroine based on a separate, real heroine.

But it’s possible people care less, given the real-life crisis over what is and isn’t a fact, about how factual things are in the movies. Inaccuracies in Green Book, for example, didn’t keep the film from winning the Best Picture Oscar last year.

But The Irishman is notable in how closely it hews to its source material. Its potential problem is that several Hoffa experts say the source material itself is suspect.

So let’s go back to our basic question: Is The Irishman a true story? Brandt has said that six weeks before Sheeran died in 2003, at the age of 83, he held up a copy of I Heard You Paint Houses and stood by everything that appears in the book, including his account of what happened to Hoffa (played by Al Pacino in The Irishman.)

But many Sheeran critics, some of whom have their own theories about the Hoffa case, say he may have been trying to puff up his own importance in his sad later years.

Harvard Law School professor Jack L. Goldsmith, the stepson of Charles “Chuckie” O’Brien (played by Jesse Plemons in The Irishman) told Vanity Fair that “there’s absolutely no basis for Sheeran’s claim and a lot of reasons to think it’s preposterous.”

His new book, In Hoffa’s Shadow, offers a different account of the Jimmy Hoffa story than you’ll get from I Heard You Paint Houses or The Irishman.

Author and investigative reporter Vince Wade, meanwhile, recently wrote for The Daily Beast that Sheeran’s stories get several details provably wrong. Sheeran says in I Heard You Paint Houses that Salvatore “Sally Bugs” Briguglio had “thick, curly black hair,” but Wade says it was sandy brown and not curly.

Wade also says that the Machus Red Fox restaurant, a key locale in Hoffa’s disappearance, was not “set back quite a way in the parking lot” as Sheeran asserts in I Heard You Paint Houses.

In the same Daily Beast story, investigative reporter Dan Moldea said he told De Niro years ago not to trust Sheeran’s account, stating unequivocally: “Bob, you are being conned.”

“Dan is a well-respected writer. I met him in D.C. for a writers thing where they get together every year. He said that we’re getting conned. I wasn’t getting conned,” the actor told IndieWire. “I have no problem with people disagreeing. He of course is an authority on Hoffa and everything else. As Marty says, ‘We’re not saying we’re telling the actual story. We’re telling our story. I believed it.’”

Also read: The Joe Pesci Role That Unites The Irishman and JFK

In a Directors Guild of America interview with Spike Lee, Scorsese made it clear that he isn’t deeply concerned with whether Sheeran’s account of what happened to Jimmy Hoffa is true.

Here’s How Old Robert De Niro, Al Pacino and Joe Pesci Are Supposed to Be in Key Scenes in The Irishman
Willem Dafoe Loved Having Nowhere to Hide in The Lighthouse (Podcast)