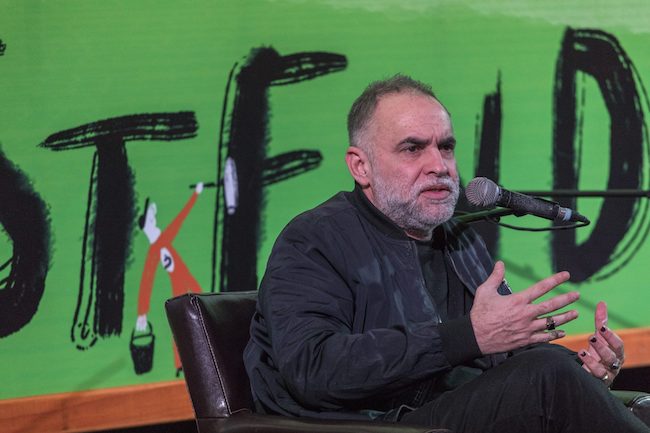 Invisible Life director Karim Aïnouz realized early in pre-production how important it was for his two leads to share a sisterly bond that was believable on screen—so he had them rehearse scenes they would never appear in.

Invisible Life follows two sisters tragically separated in 1950s Brazil. The Brazilian director explained at the Küstendorf Film and Music Film Festival last week that he needed the actors to form a bond when the cameras weren’t rolling.

“On this film, it’s important to believe these two sisters really loved each other, that they were very close sisters, and there’s very little time in the film for that,” he said. “We actually wrote many scenes that are not in the film that take place before the film starts. We lived those scenes; we rehearsed those scenes. So when the film actually starts, the two actors do remember things they had lived before as those characters.”

Also read: To Live to Sing Director Johnny Ma’s Candid Advice on Getting Film Funding: Hang Out in the Hamptons

Most of the actors were hired for three months and the film shoot was scheduled for one-and-a-half months.

“I was looking at cinema but more from an experience you have together in theater. In cinema, there’s this pressure of industry and time, and for me every project has its own way of being manufactured. For the actors, it was about them spending time together, living together,” Aïnouz said.

Aïnouz was also cautious not to make a period piece that’s “full of dust.”

“This is a film made today about that time,” he said. “This is not a film that looks like it wants to be about that time. It’s somebody today looking at at how these two sisters lived.”

Aïnouz, who worked French cinematographer Hélène Louvart, said he has a vision problem and cannot always see things in focus.

“It’s not like I’m celebrating the fact that I cannot see well, but the fact that I cannot see so well has been important in the way that I look at the world,” he said. “My habit of not seeing everything in focus all the time allowed me to shoot digitally and to not have such high resolution. These characters are somehow caged most of the time, but at the same time there is interior life, and how do you shoot and imagine that?”

Relic Director Natalie Erika James: How I Felt Through the Darkness to My Sundance Debut
Sundance Moviemakers Share Inside Tips — and Who They Want to Meet