Landing the Punch: Riley Stearns on Carefully Crafted Satire and Establishing Tone in The Art of Self-Defense

Although only one requires a cool costume with colorful belt options, karate and satire have a lot more in common than you might think. Both require graceful and pointed strikes, and a disciplined, thoughtful approach.

By means of careful execution, they also happen to blend wonderfully in writer-director Riley Stearns’ The Art of Self-Defense.

Stearns’ sophomore feature brilliantly wham-bams and ka-pows these similarities into fruition, deconstructing the absurdities of hyper masculinity in a nuanced and wistfully dark analysis of violence and impotency. His not-so-traditionally-masculine, shy-guy surrogate Casey (Jesse Eisenberg) finds himself in the midst of an empowering arch, dryly going through the motions of what his karate sensei Sensei (Alessandro Nivola) instills is the true art of confidence—what it means to be a real man and respected, and all that.

Casey applies bull-headed strong will to day-to-day life; Challenging his cool-guy co-workers to push ups, neglecting to grant his docile dachshund a pet on the head. Manly man stuff. While momentarily fulfilling, Sensei starts to creep on Casey’s life outside the dojo, spiraling into an irreversible path of violence. After a dark realization, Casey and his newfound friend Anna (Imogen Poots), the only female member of the dojo, discover Sensei’s method of empowerment isn’t all it is chopped up to be.

And inevitably, as they do, things escalate.

A tonal vacuum of well-executed satire, Stearns constructs a world in which delightfully funny moments pivot to blunt expressions of violence on a dime. The Art of Self-Defense has something positive to say, and uses a carefully constructed comedic edge to say it in a heightened way.

In his interview with MovieMaker, Stearns opens up about his method of translating satire to the screen, directing karate scenes, and strategically working with animals on set.

Alessandro Nivola stars as “Sensei” in The Art of Self-Defense. Image courtesy of Bleecker Street

Grant Vance, MovieMaker Magazine (MM): What are some of the advantages of shooting in smaller city like Louisville, Kentucky?

Riley Stearns (RS): They have a good tax incentive there, which is very beneficial for a film like ours. My producer, Andrew Kortschak, shot a movie there called The Clovehitch Killer and he recommended that we look at it. Since I had written the script to be in a nondescript location—it really could be a small town—we knew the small city of Louisville would really stick.

MM: Was the small town location pertinent to your story or theme in any way?

RS: We needed to create a world so that the film would feel like its own universe, but not so much so that it feels like a fantasy film. I wanted it to still be grounded in a way, but also feel like it could exist in its own place. It wasn’t necessarily because of the toxic masculinity aspect, but making it exist in a hyperreal space where we could play around with that a little bit more. It wasn’t that we necessarily had to shoot in a small town—we could have shot in any city, honestly. I wrote the script so that it could work wherever.

MM: Tell me a little bit about the process of translating satire from page to the screen and maintaining a consistent tone.

RS: That’s the tone that I like to write in no matter what—dark comedy. It’s the genre I like to make. So, keeping it a little satirical and trying to make fun of that idea that men think they’re better somehow, and infallible. And then establishing that world in that universe I got to push those elements a bit further than a traditional narrative drama could have pushed.

MM: On directing deadpan and dryly delivered lines—is this inherent in the page, where the script is doing most of the work, or does this delivery come out of working closely with the talent?

The first couple days [the cast is] feeling out how I like to work, and how the lines are going to sound out loud. We went in with some ideas for how it would be performed… there’s a specific thing that I’m trying to get. There would be times where they would say it a certain way and I’d say: that’s great, but let’s get it a little more emotionally removed. Try not to act like a real person would when you say this crazy line. We really found a rhythm there. It took a little finessing, but by the end of the movie they knew exactly what I was looking for. 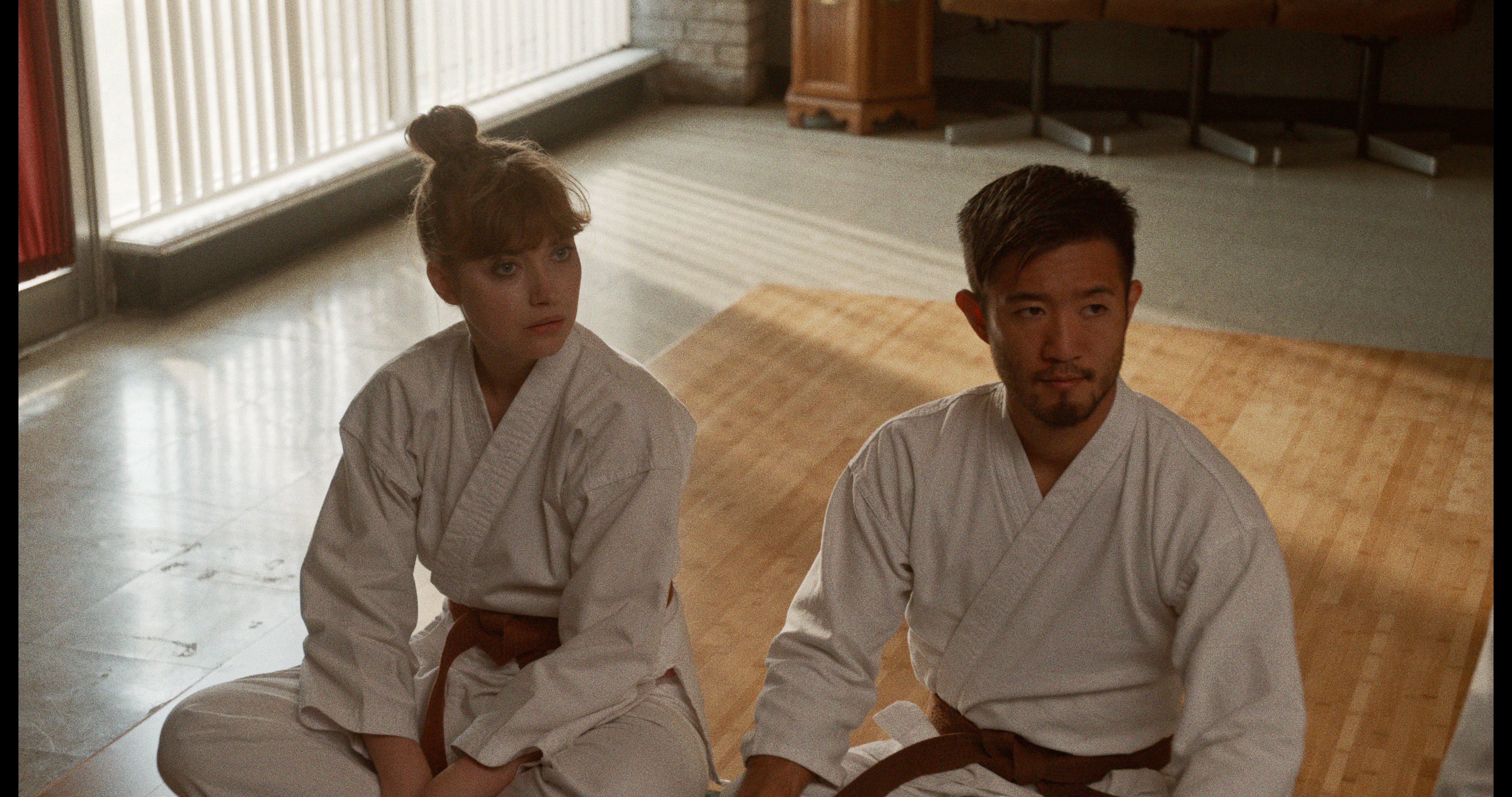 MM: As a director, how do you flow from frequent (sometimes graphic) violence right back into dark comedy while maintaining a consistent tone?

RS: Tone is a tricky thing. When you’re shooting scenes you might get something that works really great one way, but in the context of the film you may go bigger, or you may go smaller. My editor, Sarah Beth Shapiro, and I worked together on my first feature, Faults. So we understand each other, we know how each other works. But it’s good to get other perspectives in the room, not to be beholding to everyone’s opinion, but also take it in. You’re making sure that you’re not going too far sometimes. It’s always tricky, but in a fun kind of way.

MM: Do you personally know karate?

RS: I don’t know karate, but I do know Brazilian jiu-jitsu. I’ve been doing that for six years now. When I wrote the script it was 2015, so I had about two years of training at that point. I knew that I wanted to set something in this world, but I also knew because of people rolling around on the ground grappling with jiu-jitsu probably wasn’t going to be as cinematic. I also wanted it to be more recognizable than jiu-jitsu. With jiu-jitsu, like 90 people wouldn’t know what it is, but if you do karate everyone knows what that is. It was a practicality thing.

MM: Did you do a lot of extensive training for the karate sequences?

RS: Our stunt coordinator, Mindy Kelly, worked with Jesse and Imogen for about a month and got them ready in time for their fight scenes. But Alessandro only had about three days of training before he came in, and on his first day he had an extensive monologue where he was using this form. He had to memorize the form, but also the monologue. So we put him on the spot, but he handled it with flying colors.

MM: What was the process like working with the dogs in the film? Did you run into any production snafus as a result?

RS: We didn’t have movie trained dogs for the film—we had a Dachshund that was well-behaved, and her mom was on set at all times. But since that dog Moka wasn’t trained, we were probably better off not having her in it that many shots. So I think it works that you don’t see her that much.

The German Shepherd was trained as a police dog. So the dog was good at listening to commands from a trainer. That dog was trained to kill. That’s what that dog does—it attacks, and then it can rip someone’s arm off. We were very careful in how we handled those scenes, and the trainer was on-set at all times. We had the dog on the leash, and Jesse was always safe. The dog’s performance was always palpable. That dog was intimidating, but also a sweat heart. A lot of it is working within the confines of what the dog can do. MM

Hollywood Ending: Quentin Tarantino on Making Movies, Finding Love, and Once Upon a Time… In Hollywood
Skin Writer-Director Guy Nattiv On Turning His Oscar-Winning Short Into a Feature