Jonathan Levine knows what you think about his movie. Schlubby guy, gorgeous woman. He’s funny, was at one time employed, and *checks notes* has an apartment? She’s a multilingual Ivy League graduate, current Secretary of State, and readying a bid for the presidency.

Despite all sense and good grooming, they fall in love. And the audience doesn’t roll their eyes! Long Shot functions simultaneously as an anti-sexist, meta-commentative sendup of classic romcom tropes and a full-hearted embrace of the achingly pure possibilities they present.

Charlize Theron plays Charlotte Field, maverick politician and lone woman near the top of the American political power machine. Seth Rogen plays opposite as Fred Flarsky, a messy but altruistic journalist and Field’s former babysittee. The incredible supporting cast features memorable performances from June Diane Raphael, O’Shea Jackson Jr., and Randall Park, but the movie is undeniably Theron’s and Rogen’s. Their canny embodiments of pragmatism and idealism chart the course through a clever, raunchy, and somehow very touching script originated by Dan Sterling and fully realized by Levine, Rogen, and The Post screenwriter Liz Hannah. I spoke to Levine on the morning of Long Shot’s New York premiere about the film—its political engagement, its ability to escape into fantasy, and its genre experimentation.

Seth Rogen as Fred Flarsky (L) and Charlize Theron as Charlotte Field (R) are at the focus of the recently released romcom Long Shot. Image courtesy of Lionsgate

Ryan Coleman, MovieMaker Magazine (MM): Correct me if I’m wrong but you have been directing for about 15 years now. Your first short, “Shards,” debuted in 2004.

Jonathan Levine (JL): Jesus, that’s probably right. I went to film school probably 15 years ago and came out of it with that short.

MM: Having completed this big-budget, star-studded studio feature, how does it feel to look back at your start?

JL: I don’t want to sound arrogant, but I’ve always had this irrational confidence that I was meant to do this. Combine that with the emptiness at the heart of anyone who tries it. And the total self-doubt. It’s a weird combination that a lot of directors have where you’re like, “I suck, but I’m awesome!” If you were to ask 2004 me about where I am today I’d be like, “of course I’m making movies!” But there’s also that part of me that thinks, “oh my god, what an incredible thing to be able to do. How lucky I am.” A large percentage of it really is luck—I’m very grateful. It’s an inherently contradictory place to live but it’s partly what drives me. Self-doubt plus irrational self confidence.

MM: At the core of this movie is an experimentation with classic comedy tropes. You have the “long shot” trope, obviously—she’s out of his league in every way, except for the important internal way. Then you have the value-driven character compromising on their ambition to support their more ambitious partner, who might actually be value-compromised. Can you talk about the work being done on these tropes in Long Shot?

JL: From the very beginning we were interested in working within the tropes and subverting them at the same time. It wasn’t a strategy, it’s just what was interesting to us. Baked into the script are these issues, this kind of Pretty Woman setup in reverse. It’s part of Seth’s storytelling mode to call attention to these rote roles. It lets the audience know everything is intentional and we’re aware of what we’re doing. It helps them feel like they’re in good hands. It was always important to us to tell the story in that way: hold up a mirror to society and show how challenging it is for a woman to ascend to power in the face of all these obstacles.

Not to give anything away, but ultimately the guy learns his best role is to be supportive of his partner, in her background. She is the one in this relationship. Her success is the success that matters. His acceptance of his own mediocrity, and his acceptance that he is best suited to be supportive and nurturing and listen—all these things that women have historically been expected to do—promotes a progressive ethic. I’m proud of the way the story ends. It may not be the most narratively satisfying, but it makes the most sense. In terms of the math of the story, when you try to move a conversation forward by telling a story or inspiring thought, it made it so this choice is right for this character. 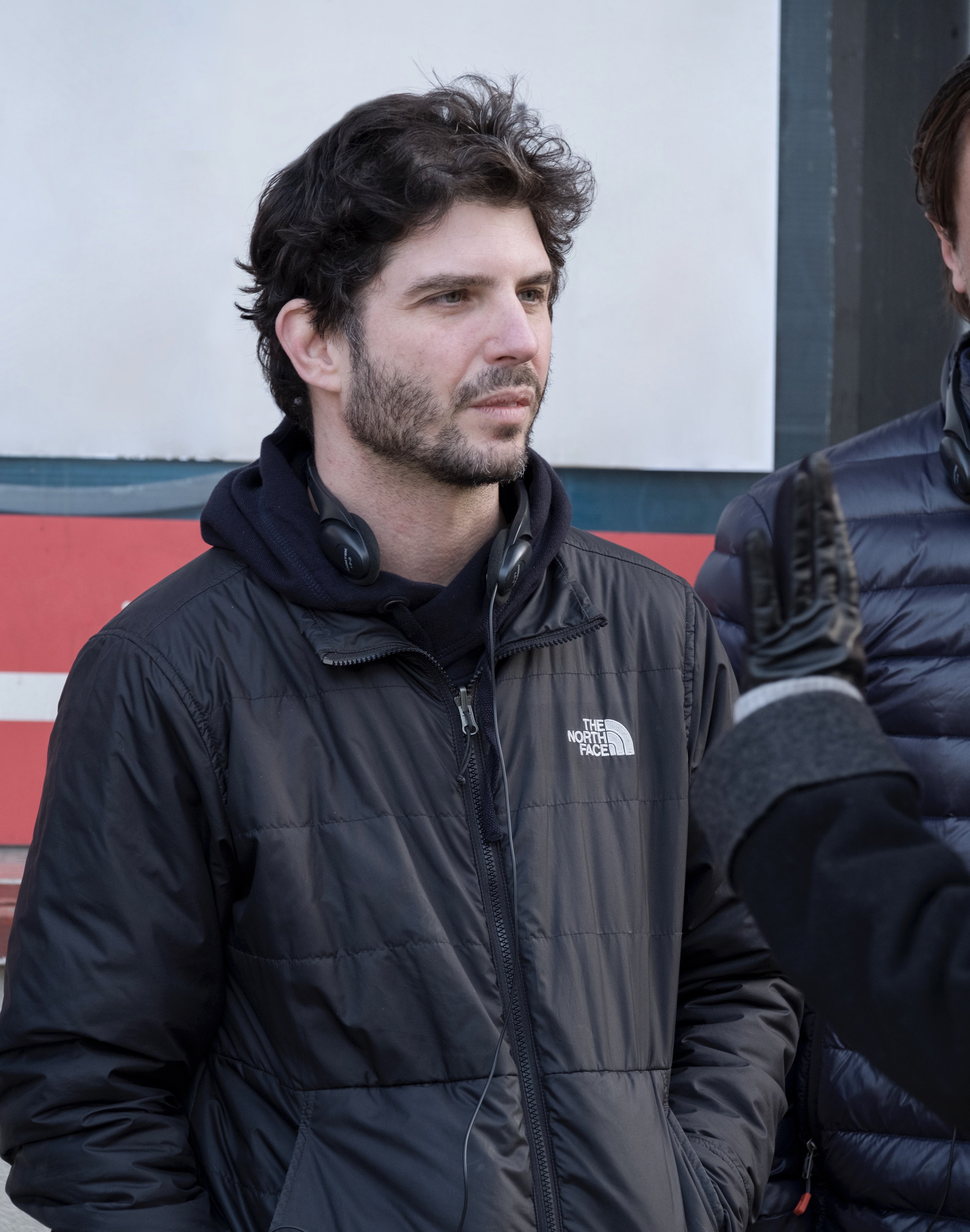 Director Jonathan Levine on the set of Long Shot

MM: Were there moments in the script the writing team realized embracing the tropes actually worked better for the logic of the story?

JL: When you’re telling a story like this you have to exist a little bit within the tropes of the genre. It’s a credit to Seth and Charlize’s performances that you actually quickly disregard any pre-conceived notions about who is more attractive or what worlds they come from. They’re just a guy and a girl falling in love. I wanted to approach their arc from a naturalistic, grounded place. What’s so great about romantic movies? They remind you why you fall in love, and the reason people fall in love isn’t because someone is really hot. You fall in love because you challenge each other, you remind each other who you want to be and you help the other person become that—you make each other laugh and listen to each other. We wanted to showcase all those important things that actually drive relationships.

MM: Tell me about scripting that pivotal third act confrontation between Seth and O’Shea, where O’Shea checks Seth on his implicit privilege and racist bias, despite however woke he’s convinced himself he is.

JL: That moment came into the script relatively late. In the era of Donald Trump … we tried not to make this a movie that forces you to think about the current world that much. It’s escapism. The film exists in a parallel world to ours. They’re similar worlds, but the film’s world is a background for our characters and their story.

At the same time, it was important to us to zoom out and look at this movie in ten years, when the heightened state of divisiveness in this country will hopefully be a distant memory. It’s fun to make fun of Fox News and Rupert Murdoch and the president. But it’s also low hanging fruit. We needed to balance that with a more nuanced takedown of people we know who probably agree with us a lot. That’s something that had a higher degree of difficulty than the other stuff that we did. It was hard to find that correct balance—we couldn’t have it be too incisive or outraged without spoiling the romantic comedic elements. It couldn’t be the point of view of the movie, but it could be the point of view of Seth’s character Fred. I know so many people like Fred. It was important to examine that person’s culpability in this moment—why they’re getting in their own way, what their follies are.

When we came up with that scene we were very excited because it exposes the kind of guy who is outraged but doesn’t listen to other people and occupies a moral high ground. He doesn’t even know these important things about his best friend because he’s made him scared to be around him. I thought it was a clever way to approach it, and it’s also a valid and real criticism. A lot of us have parts of him in us, too. That was the lane we wanted this movie to occupy, when it came to societal critique, or cultural criticism. We wanted to approach it from a character driven place, that was insightful without being outraged. That scene was a good distillation of that.

MM: How did Liz Hannah get involved?

JL: Dan Sterling wrote this amazing script. It had the core set up, one character was an idealist, the other was a pragmatist. He’d charted it so strongly. But when Dan wrote it, Obama was president. It was a very different time! We wanted to update the script’s politics and saw that as an opportunity to integrate a female perspective. We wanted it to be a two hander; we did not want it to be a story being told by men. And it wasn’t just Liz it was Charlize, who was a producer. We’d integrate her notes, her ideas, and her personal experience. When I read Liz’s script for The Post, it was so insightful. Kay Graham’s character was so well drawn, and I saw a lot of parallels between that character and Charlize’s. Beyond that, I wanted us all to all get along as well as possible. It’s a long road together, and it was important we be as humble, as ego-less, and as collaborative as possible.

When we write we do it in such a specific way. We put drafts up on a big screen TV and tag team it together—me and Dan and Seth and Liz. The amazing thing about her is we’d work all night, Liz would take the script and all the notes home and by the morning there’d be an email from her with 45 new pages.

Oh, but the way we came to her initially was that she was Charlize’s assistant. Did you know this?

JL: She was an intern at Charlize’s company. She gave some of Charlize’s producing partners pieces of a script, not The Post, and said basically, “I want to be a writer, please tell me if this sucks.” They loved it and told her she should go be a writer. From the moment we met Liz we knew it gelled and that we would all get along. She was such a vital asset to getting the movie to where it is, which I hope other people will think is as excellent as we do. MM