Keep it brief, keep it fun, and keep it creative: That’s how an effective social media post lures in eager followers.

Nobody said anything about keeping it authentic or not bending the truth, because in such a highly curated setting, what can truly be real? For director Matt Spicer’s title character in his sharp debut, Ingrid Goes West, the opportunity to hide insecurities, manipulate emotions and create a false-yet-attractive version of herself online is a godsend whose benefits she’s willing to push far beyond the bounds of sanity.

Starving for even a hint of attention and belonging, Ingrid (Aubrey Plaza) targets a successful influencer, Taylor, (Elizabeth Olsen) with the deranged goal of infiltrating her life and developing a friendship that appears organic online, but that, of course, has been carefully machinated, like the perfect Instagram post. The bright Los Angeles summer and artificial positivity can’t hide her true intentions for long, but that doesn’t mean Ingrid will ever be ready to move on. She is a “likes” junkie, and she embraces it in her own pathological rationale. (Aren’t we all?)

Scroll through our chat with Aubrey Plaza (@plazadeaubrey), Elizabeth Olsen (@elizabetholsenig) and director Matt Spicer (@hellomattspicer) for more details on this humorously disturbing, Best Screenplay Sundance Award-winner that’s both of its time and also, like all compelling works, built on timeless human preoccupations.

In the spirit of the movie, we’ve formatted this talk in the style of an Instagram thread. (No link in bio, but plenty of comments!)

Carlos Aguilar, MovieMaker Magazine (moviemakermag): @hellomattspicer How does a first time director get a cast like this? #StarStudded

Matt Spicer (hellomattspicer): I honestly wish I could tell you the secret. I literally just did the same thing that I did with all of my other scripts. I sent it to my agent, and I don’t know if it was the timeliness of it, or we just caught Aubrey at a good time, and she was looking for something like this, but I don’t know what to tell you. I just sent it, Aubrey read it, we met, and she wanted to do it, and I think she definitely helped attract others.

Aubrey Plaza (plazadeaubrey): Yes, I do. I’m always hesitant with people who haven’t done it before. He wrote the script, so he knows the material better than anyone. After our first meeting, talking about the kind of movie he wanted to make and talking about the characters, I felt like, “This guy knows what he wants and what he’s doing.” I felt like he would pull it off.

Elizabeth Olsen (elizabetholsenig): Honestly, when I met Matt, I was like, “He’s so young, but you know, you’ve worked with young people before.” Knowing that Aubrey was a producer somehow was comforting, and even while we were filming, I was like, “OK, I think we’re getting good stuff and he’s really funny and thinks on his toes,” but I didn’t understand how great of a director Matt was until I saw the movie—even after the experience. I know what we filmed, and I know the elements that he created while putting the movie together. He put another character into the film with the editing, and how he unraveled the story, and the graphic design of the film. You don’t know what’s in someone’s actual visual brain until they communicate it. I was like, “You did such a good job! I’m so excited about it.” 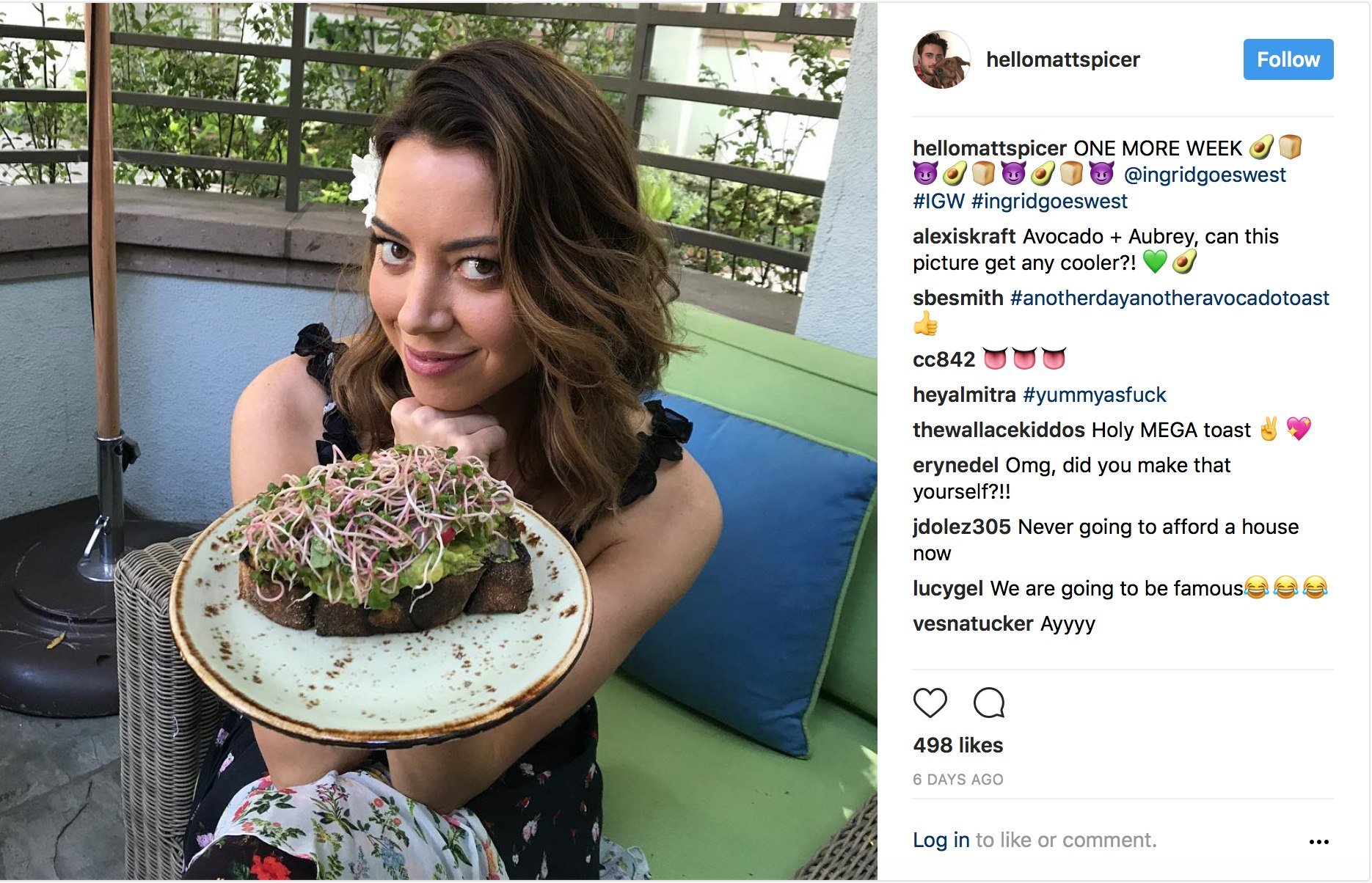 hellomattspicer: No, not necessarily. We were of the mindset of, if we could get someone like Aubrey, great, but if not, we’re just going to go make the movie. We’ll make it for really cheap and we’ll just put our friends in it. We just ended up getting lucky with Aubrey, and the good luck continued through. Aubrey actually helped get O’Shea in the movie, she reached out to him through Twitter. Having her was definitely a huge asset, being able to attract the talent that we wanted.

moviemakermag: @plazadeaubrey @elizabetholsenig When you read the screenplay, what did you think of each of your characters? What did you feel about these women and their particular struggles? They’re both suffering in their own way. #PrayForThem

plazadeaubrey: I felt really bad for her. I felt like I could relate to someone who wants so badly to connect and feels misunderstood and insecure, and compares themselves to other people, and doesn’t have an identity and wants to copy someone. I’ve felt that in my life before, that feeling of, “I’m not good enough,” or, “I should be like them.” There was something about that I really related to.

Breaking Down Your Script? Follow These Steps to Mark and Tag Your Way Through Pre-Production (Video)
Staying Alive: The Director of Liza, Liza, Skies Are Grey Shares How He’s Sustained A 63-Year Moviemaking Career