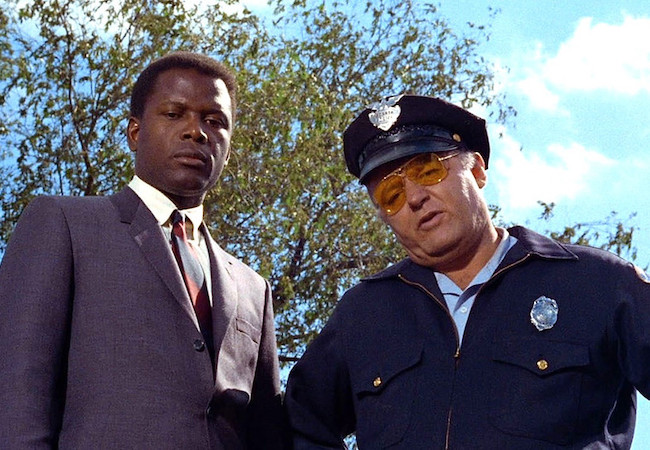 Reading the Bible, or Shakespeare, there’s sometimes a tendency to say, “This isn’t so great — I’ve heard this story a million times,” before realizing that you’re reading the often-imitated originator of the story. The same is true of watching Sidney Poitier movies.

Though Poitier, who died Friday at 94, won his Best Actor Oscar for the 1963 film Lillies in the Field, the first three films mentioned in the first line of his New York Times obituary are better-known: To Sir With Love, In the Heat of the Night, and Guess Who’s Coming to Dinner.

Their prominence in the obituary makes sense: Each of the three films launched its own subgenre, and countless imitators.

Of course Sidney Poitier didn’t singlehandedly create any of these films. But he played the key character in each, stood out the most, and was the unifying figure of the three. Astonishingly, all were released in the same year, 1967.

The most obviously imitated might be In the Heat of the Night, the template for such future interracial “buddy-cop” franchises as 48 Hours and Lethal Weapon. Those films, and others that tweaked the formula, were built around a clash of two very different cops who eventually win each other’s respect. While the unlikely partners catch the bad guys, the films examine racial disparities in law enforcement, and in society at large.

In the Heat of the Night went for straight-ahead social drama, not Lethal Weapon-style quips, but its fundamental idea was too good not to copy and endlessly tweak.

Training Day notably shakes up and undercuts the cliches of the sub-genre by making the saintly Black cop (who often helps the white cop see the light in these kinds of movies) into an unrepentant sinner. It’s notable that Poitier became the first Black actor to win a Best Actor Oscar in 1963, and that Denzel Washington was the second Black actor to win Best Actor nearly 40 years later for playing a character — Training Day‘s Alonzo Harris — who is almost a perfect inverse of Poitier’s heroic In the Heat of the Night character, Det. Virgil Tibbs.

To Sir, With Love, meanwhile, spawned a subgenre that became so popular that it seems, for the time being, to have exhausted itself. He played Mark Thackeray, an overqualified teacher to a band of supposedly unreachable kids.

It’s a beloved film, and and inspiring story, but Hollywood reproduced the idea in films ranging from Lean on Me to Stand and Deliver to Dangerous Minds, as well as in countless subpar TV shows. After so many ’80s and ’90s stories with such a similar setup, the earnest (and maybe condescending) teacher who wins over street toughs by teaching that rap is just another kind of poetry became a tired trope.

Perhaps the Sidney Poitier film that has felt the most relevant recently is Guess Who’s Coming to Dinner, in which seemingly liberal white parents deal with the news that their daughter is dating a Black man. The setup has been endlessly and overtly copied: Its Wikipedia entry notes that it has inspired episodes of shows from The Golden Girls to The Fresh Prince of Bel-Air to Last Man Standing, as well as a poorly reviewed 2005 Bernie Mac-Ashton Kutcher-Zoë Saldaña film, Guess Who, in which a Black woman brings home a white man to meet her parents.

The best twist on the setup by far is Jordan Peele’s 2017 Get Out. Gone entirely is the hopefulness of Guess Who’s Coming to Dinner, replaced by the horrifying reveal that even an apparently friendly white family actually sees Black people only as commodities, to be robbed off their souls and commodified.

None of these sub-genres were sub-genres yet when Poitier came to Hollywood. In fact, nothing he did had ever been done before by anyone like him, because of Hollywood’s hideous history of bigotry and exclusion.

“I arrived in Hollywood at the age of 22 in a time different than today’s,” he said in 2002, accepting an honorary Oscar, presented by Washington. “A time when the odds against my standing here tonight, 53 years later, would not have fallen in my favor. Back then, no root had been established for where I was hoping to go. No pathway left in evidence for me to trace. No custom for me to follow.”

Main image: Sidney Poitier and Rod Steiger in In The Heat of the Night.

Continue Reading
Advertisement
Related Topics:feature, Guess Who's Coming to Dinner, in the heat of the night, Lillies in the Field, Sidney Poitier, sub-genre, To Sir With Love