ICYMI: The Best of April 2017 on MovieMaker.com

When it rains it pours, and in April 2017, showers of weirdness and wisdom came down on MovieMaker.com.

Christian Bale, Anthony Bourdain, Neil Gaiman, Terry George, Werner Herzog and more all sat down with us to talk everything from the Armenian Genocide, (depicted in Bale and George’s The Promise) to the insights scoring drugs on the street can offer moviemakers, to immigration and racial politics in television casting, (as encountered in Gaiman’s American Gods) and, of all things, the “very strange cross-section of tragedy and raw power” Herzog sees in Mike Tyson.

The first signs of spring also came with the launch of two of MovieMaker‘s most comprehensive lists: the 50 Film Festivals Worth the Entry in 2017 and Austin Film Festival’s 5 Screenwriters to Watch in 2017. We’re proud to say with confidence that indie moviemakers’ journey to submit to the festival circuit and monitor the current crop of screenplay scribes would be a little less complete without consulting these two guides first.

All this, plus instructive behind-the-scenes looks at how to pull off UFO sequences and cemetery-bound location shoots, tutorials on re-arranging screenplay structure and other goodies await in this monthly round-up. Enjoy!

Your funds are limited but your film festival ambitions aren’t. Submit strategically: Here are our 50 Film Festivals Worth the Entry Fee in 2017.

Meet our latest class of rising cinematic wordsmiths, whose words you’ll be quoting for years to come.

How They Did It: To Juice Its UFO Scenes, Phoenix Forgotten Used Air Vacuums, Taxidermied Animals and Other Practical FX (By Justin Barber)

Rotating sets tied to a forklift? Blowtorching coyote corpses? All in a day’s work for the director of Phoenix Forgotten. Here’s how he checked these tricks off his “cinematic bucket list.”

Accessing the Armenian Genocide: Christian Bale on Tapping Into Historical Suffering For The Promise (By Paula Schwartz)

Christian Bale didn’t know about the Armenian Genocide until working on The Promise. Now he hopes the film will raise awareness and compassion.

“This Is Not Our Planet Anymore”: Werner Herzog on Why He Makes Movies From “The Quasi-Perspective of an Alien” (By Max Weinstein)

Werner Herzog talks poetry, politics, food waste, Trump and his “very fascinating discourse with Mike Tyson about the Roman republic” in our conversation on his films’ view of the planet.

* “Extras are people, not set dressing. Do not let anyone abuse them.” Terry George (The Promise, Hotel Rwanda) shares his wisdom.

** “Having had to score drugs and make quick decisions about the basic character of an individual… those skills serve me very well in the entertainment business.” Anthony Bourdain dishes on what he’s learned on the streets, in the kitchen, in front of the camera and now, as a moviemaker. 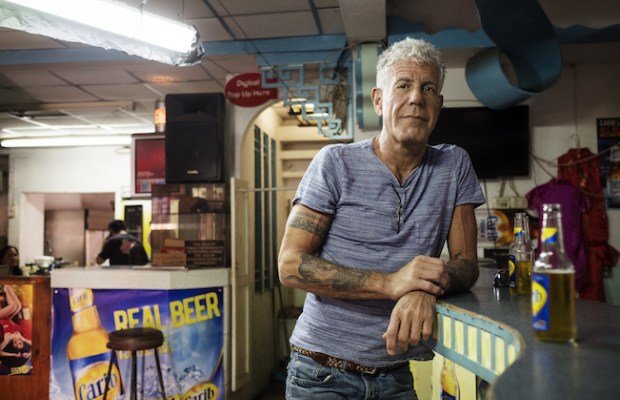 First Draft: Rewrites Aren’t the Only Way to Improve Your Screenplay. Try Rearranging It Instead (By Ken Miyamoto)

Your script’s written words may not be the problem after all—it could be where you put them. Take a piece of your story from here, put it over there. Use this case study to help you.

“You will change the racial makeup of any of these characters over my dead fucking body,” Neil Gaiman told the American Gods producers.

How They Did It: One Week and a Day’s Eulogy Scene Was Staged and Shot to Mirror Its Protagonist’s Mental State (By Asaph Polonsky)

The heart of Asaph Polonsky’s stoner dramedy about sitting shiva and smoking medicinal weed, One Week and A Day, is its cemetery-set climax. Here’s how he pulled it off.

In Juzo Itami’s Tampopo, new from Criterion, playful vignettes serve as side dishes to the film’s narrative main course. Let’s look at how they work to bring out the film’s many flavors.

The Family That Makes Movies Together Stays Together: Working With Your Kids? It’s Possible, Say These Clans (By Ted Elrick)