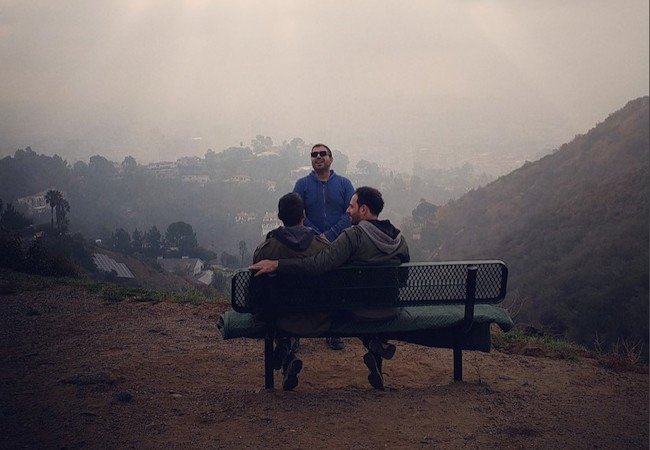 Mike Mosallam is the writer and director of Breaking Fast, a romantic comedy that follows Mo, a practicing Muslim reeling from heartbreak. When an All-­American guy named Kal offers to join him in his nightly Iftars­­ — the traditional meal eaten by Muslims during Ramadan­­ — the two discover they have more communities than they realized. In this piece he talks about the impetus for the movie — and the bizarre challenge posed by one location. Breaking Fast is now available on VOD.

Find your voice. Find your tribe. Tell your story.

Sitting at Coffee Commissary on Sunset and Gower, sipping an almond milk latte, Michael Lannan (creator of HBO’s Looking) asked me a question that, unbeknownst to me, would set me off into unchartered territory. “What are some films or TV shows that you feel best represent you?” I was stumped. I couldn’t think of a single character in mainstream (or even indie) film or TV who I felt represented a journey that looked like mine. Michael’s words were simple and strong: “Then, write it.”

Tl;dr: The bottom line is I made a movie – a nuanced and complex story based on the intersection of my various identities. There was no blueprint because this movie never existed, but I found my voice (well, my writing “voice” and I found my tribe (of filmmaking collaborators) and off we went on a great adventure. If you’re interested in how this all unfolded, keep reading.

I never fancied myself a writer. Don’t get me wrong — I am a storyteller; I love the art of a good story and bringing that story to life. I come from a theatre background, so being around and on the inside of content creation wasn’t new to me. But write a screenplay? No way! As my best friend (and producer) Sarah Bazzi can confirm, I went home after that fateful coffee date (which wasn’t a date) and did exactly what Michael told me to do: I wrote a story. That story ultimately became the short film version of Breaking Fast.

Truth be told, the initial script was written in a Microsoft Word document. The dialogue was written exactly how one might find the formatting of a play or the book of a musical. It was not a properly formatted screenplay crafted in a professional screenwriting software. (Frankly, I didn’t know what Final Draft was). However, as I showed the script to more and more trusted friends, I received little bits of wisdom along the way. Readers immediately saw the relevance and importance of this story: a nuanced tale about a Muslim man who is gay, and how shockingly those two things weren’t living in conflict, but rather, in harmony. It was not an autobiographical story, but it was a story that I knew and needed others to know as well. The characters, while not based on actual people, represent a reality that needs to be seen.

Shortly after writing the script, I mustered up the courage to share it with a producer friend, Seth Hauer (also from Looking), and asked if he’d give me his thoughts. He quelled any insecurities I might have had about structure/format, saying the characters and voice (the important part) were unique, and everything else could be finessed. And just like manna fell from the heavens, he went from giving me tips, to coming fully on board to help me develop the script, and shepherd the production. Seth later told me that, despite not being Muslim, the story resonated with him, and his own religious (conservative Christian) background – we both felt that dichotomy between childhood upbringing and one’s adult identity would have universal appeal.

Things pretty much fell into place from there: We found funding, locked in our Breaking Fast cast (aka our friends), and called in favors left and right. However, the day before the start of principal photography, we hit a major snafu. There is a scene (both in the short and the feature) where the two leads go to the store to buy some gum. The day before we were scheduled to shoot this scene, our location in West Hollywood (don’t ask which, I won’t tell you), called to inform us that the employees were nervous about the subject matter and thought “they might become targets of ISIS.” I hope your jaw is on the floor because trust me, mine was. “Targets of ISIS.” What does that even mean? Some dude in a cave was somehow going to see my short film and target the employees of this particular store? I was flabbergasted. I’m not naive — I know Islamophobia exists everywhere, and have at times been the victim of it, but rarely in such a way that so directly affects my work, and my friends….

Fear not, fellow readers, this story has a happy ending. The crew — made up of men and women, Muslims and non-Muslims, Queer and non-queer folx — all rallied together and quickly found an alternate location. All we needed was a small little rewrite to fit to the new location, and boom – cinematic history. Well, it might have been, but in the end, that scene ended up on the cutting room floor. Nonetheless, THANK YOU WEHO BLOCK PARTY for coming to our rescue!

Let’s jump ahead. The short played well on the festival circuit, and we were lucky enough to play at Cannes and some other notable festivals. Along the way, people kept wanting more – we’d field questions like: “What happens next?” and “Are you writing a feature version?” Full disclosure, we hadn’t really thought about a feature version, but these questions confirmed one thing for all of us — there was an audience for this story, and that audience was starving.

On the plane ride home from Cannes, I opened my laptop and started to write.

Four-hundred-and-thirty-eight drafts later, Breaking Fast was written, expanded from the “meet-cute” that is in the short, into a feature-length story, structured around Ramadan, and the conceit of two characters cooking 30 meals over 30 days. The film was brought to life using the same exact producing team (plus one invaluable addition), screened at more than 66 festivals, and will soon be available to purchase or rent from the comfort of your own home.

Casting the feature was hard. Let me rephrase that – I made casting the feature hard. I was really specific about the people that I wanted to see for this project. After all, I was a Muslim, Lebanese-American telling this culturally specific story. It had to be done right. So, I handed our (incredible) casting director, Tineka Becker, a list of 22 Arab countries, explained what the Levantine region was, and prayed she would do her magic.

And magic she did. She found so many incredible Arab actors to fill out the Breaking Fast cast. And it was clear, all of these very accomplished actors had never (or perhaps rarely) been given an opportunity to tell a story that sounded like, felt like, and lived in such familiar territory for each of them. Every day on set was like My Big Fat Greek Wedding – only Arab, with more food, and instead of Windex, we used olive oil to cure all ailments.

Telling this story was hard. It was honest, vulnerable, and more exposed than I had ever been. There were times when I didn’t think I could do it. But two things kept me going: my faith and my tribe. Looking around, I was surrounded by exactly the people I needed to tell this story successfully. They didn’t just magically appear; they were all there by design. Angels. Truly. And (trust me this next part took a while), I was exactly in the place in my life that I needed to be to tell this story. It was only when I let the story take over that I was able to find my real, authentic voice.

Breaking Fast, written and directed by Mike Mosallam, is now available on VOD.