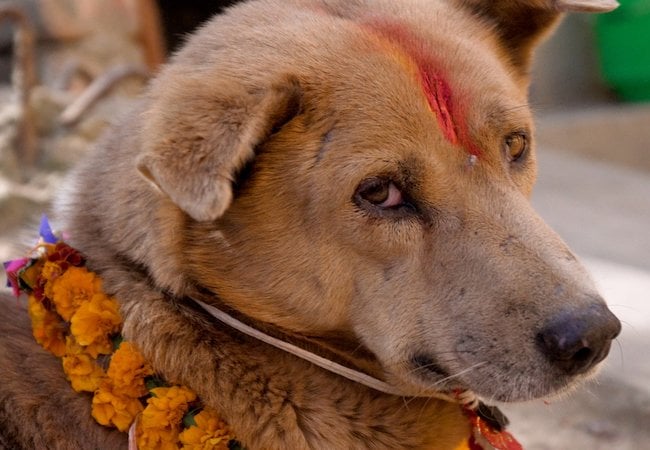 Matthew Salleh is the director, cinematographer and editor of We Don’t Deserve Dogs, which chronicles the relationship between dogs and humans around the world. He has been working independently with his partner Rose Tucker, who produced, recorded, and edited the film, for 15 years. The film is available to rent and buy now at wedontdeservedogs.com.

It never started out as an exercise in extreme DIYness. It was meant to be much easier. But throw in a volatile financing and distribution landscape, a global pandemic, and an intense desire to see a specific vision through without being exploited along the way, and you have the story of why we decided to undertake every single stage of production with just two filmmakers, working out of our one-bedroom apartment in Brooklyn.

A little background: Our previous documentary feature, Barbecue, was a documentary of immense scope. Filming the community act of cooking over fire in a dozen countries around the world, accompanied by a live symphony orchestra score, was ambitious. Over 200 days of filming on every continent. Sure, we made the film with a crew of two out in the field (myself and my partner Rose Tucker), but we had funding agencies from Australia foot the bill, and another producer to contend with. This came after a decade of working pretty much completely alone – producing commercials and short films – so we had to learn to play well with others. Something we aren’t always good at.

We were fortunate with our debut feature. With a film print in our backpack, we moved from Australia to America in late 2016, and within a month we were lucky enough to secure a world premiere at SXSW. We sold the film in a three-year global deal to Netflix the day after our debut. The deal gave us a small runway of funds to do whatever we wanted next.

We always wanted to make a film about the relationship between dogs and humans around the world. This unique bond, framed within different cultural contexts, says a lot about who we are as people. But we didn’t want to make a “cute doggy” film – there were plenty of other films that did that plenty well. We wanted to create something melancholy, rooted in a sense of solitude of people who find their days made easier through the animals they share life with. We also wanted to create a juxtaposition of light and dark – in calling the film We Don’t Deserve Dogs, we wanted to contemplate whether we deserve the loyalty and love that dogs show us. And that meant taking on some more challenging and confronting subject matter.

With our little bag of Netflix money, we started working on the film the way you’re supposed to. We got a sales agent. We created a pitch deck. We took meetings. We assumed having one “hit” film behind us would be enough – we were told quickly that we had only one hit so far – nowhere near the amount of hits required to have the kind of autonomy we wanted.

We had plenty of interest in our little film, from some fairly big players, but it just never quite moved to the next stage. One big problem was that people expected us to shoot a sizzle reel so they could grasp the concept better. For us, that meant demonstrating the juxtaposition of diverse cultures around the globe. The sizzle reel people were asking for would literally cost the entire budget of the film.

After an entire year of things in a boring stalemate, we decided to act. Sitting around wasting time was shortening our runway anyway, so we might as well be doing what we love – filming.

What we did was create a “real” budget of the film, that only we would know. One where we didn’t pay ourselves, and existed on the shortest of shoestrings. That’s where Rosie came in. We have always been proponents of shooting on small kits, so we shrunk things down even more. Think of that scene in Apollo 13 where Gary Sinise is watching that the voltmeter doesn’t go over the red line. We knew if we could get the gear small enough, we would save on luggage across a lot of flights. We also started co-ordinating ways we could film stories economically. There was a story in Uganda we desperately wanted to film. There was also a story in Finland. You can get to both locations from Brussels. So we’d film those stories together.

When it came to hiring local researchers/translators, we’d get creative. In Santiago, in seeking out the story of ‘quiltros’, or street dogs that are actually very loved, we worked with a street tour guide who had personally researched walking tours focusing around Humans Rights issues. We could pay people well, but avoid a scenario where local film fixers assume you want the red carpet rolled out for your talent and crew – and charge accordingly.