How to Salvage a Rain Day: Battling Inclement Weather on Amigo Undead 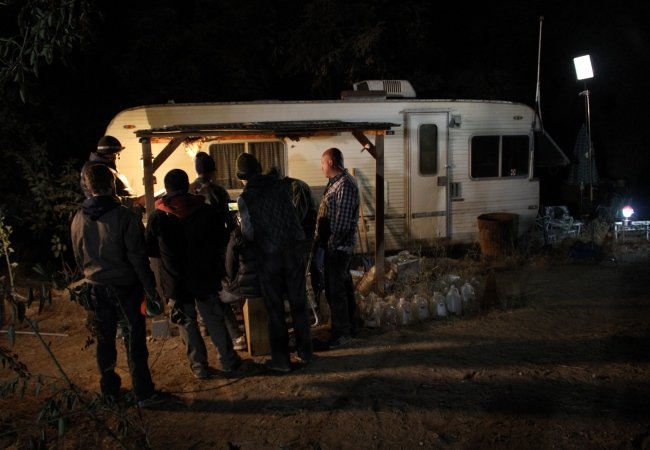 We’ve all had one: the dreaded rain day. The one that washes out an entire—absolutely integral—day of production.

What can you do when the heavens open up upon your poor, damp little shoot? Not a whole lot. Or can you? George Edelman, co-writer and producer of upcoming horror-comedy Amigo Undead, has some ideas. The film, about two estranged brothers who unwittingly unleash an ancient undead curse, met with a surprise storm in the middle of their California desert shoot—and through some resourceful thinking, Edelman and co. got their schedule back on its feet.

The first week of filming on Amigo Undead was hot. Blistering hot. In between takes, the movie’s stars, Randall Park and Steve Agee, would rush into the nearest car and blast the air-conditioning. It was during one such moment that Steve glanced down at his phone, then turned to me and said, “You know it might rain tomorrow?” I glanced at my own weather app, panicked.

“Only 20 percent chance, though,” he said. “That would be really bad luck.”

“Let’s not worry. It never rains in Southern California,” I said, half in jest, half in prayer.

No matter how hard the indie filmmaker tries to plan for every contingency, there are always at least a few problems popping up that nobody planned for. And, typically, the ones you planned for the most never become a problem at all. In our case, planning for rain in the desert location we shot most of the feature in was not even an option. Our schedule was jam-packed; our shoestrings as tight as could be. There were no cover sets. There was a little room for error, but for an entire day of rain? In the middle of a non-rainy season? No. There was no room for that.

Of course, Steve and his weather app were correct, and the next day it rained. And when I say “it rained,” I mean “it poured.”

Upon first arriving to set and accepting the Murphy’s Law-ness of it all, I started doing what the producer in me always does: trying to think a few steps ahead to the worst-case scenario. How do we handle this? We cancel this day of filming, regroup, try to tack a few of the lost pages from today onto one our other packed shooting days (though we were already moving at a breakneck 10 page a day clip)… maybe add another second-unit day down the line.

What did that plan mean? First off I knew I’d have to ask the cast called that day—Randall, Steve, Mike McCafferty, Ed Galvez and David Clennon—if they could come back for one more day later on. Luckily this was the least of my concerns, since I knew all of them well, and knew they’d find any way possible to help make the film happen, schedules permitting. This is one of the virtues of working with friends.

But coordinating all of them, adding in the fact that we’d need to get the location and likely a new crew back, rent all our equipment and gear for just one day (all our deals were based on the three-day week), and tack on everyone’s rates for that additional day? My head started spinning as the new costs mounted. New costs we wouldn’t be able to afford. Had we come this far on this movie only to hit the wall now?

Well… maybe the rain would subside. That was certainly a possibility.

I pulled up to the part of our desert locale we’d be filming in that day, and stepped out of my car into a river of mud, and was immediately drenched. Yeah—the “rain subsiding anytime soon” plan wasn’t gonna to cut it. I’d been checking my weather app constantly; the majority of the day would be pretty rainy. With some luck it might subside, but not until later, once our entire day had been wasted.

I was always the first one to set, and once the rest of the production team showed up we busied ourselves trying to put up our tents (originally rented for shade, since up to this point the sun had been our primary nemesis, not the rain). We were attempting to create an area to protect our makeup and wardrobe, since they usually worked inside the RV we rented, and today that space would be needed to house everyone and everything else. I had a brief little pow-wow with the other producers, the production manager, and the first AD to discuss. They all were echoing the grim sentiment I had considered on the drive over: The day was lost. Our conversation triggered in me an even grimmer thought: Maybe the movie was lost.

It was just then that the director—my co-writer and long-time creative partner in crime, Ryan Nagata—pulled up in his car. I approached him, he rolled down his window, and I said, “Well, it looks like we might have to just push this day…” Ryan didn’t hesitate: “That’s not an option.”

Ryan and I had been at this indie filmmaking thing together for a long time—since high school, to be exact. We’d started off making video projects for science class, and using up our free periods, recesses, and lunches to storyboard sequences, pick out costumes at second-hand stores, and shoot scenes. Our first attempt to make a feature came in 1999 when we were seniors. It was a WWII movie, and I’ll never forget a formative moment when we went out first thing in the morning to shoot part of a D-Day landing sequence in the freezing cold dawn at the beach. Ryan had built a giant hedgehog (the name for that big D-Day landing obstacle you’ve seen in movies before), and two of our poor classmates were dressed up in period accurate WWII gear. I remember us struggling to film the scene quickly, as a slow drizzle started to come down—one of those other rare times L.A. got rainy. That was the moment I first tasted the hard reality of trying to make a movie. How the elements conspire against you, and how if you really want it, you have to forge onward. We pushed through that morning, and something in me knew we’d push through now. I wasn’t sure just how yet, but I knew we had no other choice. Hell, if we did it for that silly movie in 1999, we were going to do it for our first real feature now.

I decided to talk to our crew, particularly our cinematographer and sound mixer, both of whom were also renting out their own equipment to the production. The two guys risking their gear in this weather would have to be on board. My plan, at least at first, was that we would cover the gear with a series of flags and tarps rigged on c-stands, and film from those (hopefully) safe confines, while the poor talent would play their scenes out in the rain.

The crew was game. Now Ryan and I would need to go over the day and shot list with the first AD, so we could try and figure out what would be easiest to grab in these modified conditions now, and what we could push to the later part of the day when, maybe, if we were lucky, the rain would subside.

Just then there was some thunder. And some lightning. We all exchanged a look. The 1st AD broke the silence: “I’ll throw on a football helmet and run out there and go if you guys give me the word.”

Something seemed to happen once everyone got excited about working as a team against the odds. It was almost as if everyone got a little pep in their step. Suddenly, once we committed to our plan, we started coming up with new ideas. We could use the interior of our RV to a film a later scene with Dave. We could even grab some ADR we’d need from him while in there. We could have the art department rush to set up the interior of the old shipping crate laying around on location that would later serve as Dave’s character’s bunker. That could also serve as our impromptu cover set. Suddenly, we were firing on all cylinders again and we were figuring it out.

And then, something crazy happened: It stopped raining. We pushed through with our revised plan, quickly jumped back onto the old plan, and not only made our day, but we ended up a little bit ahead of schedule. Even though we had a little bit of bad luck with the rain, and we got a little bit of good luck when it cleared, I’d like to think that on that day we made our own luck. MM