First Draft: How to Introduce Multiple Characters in a Single Scene 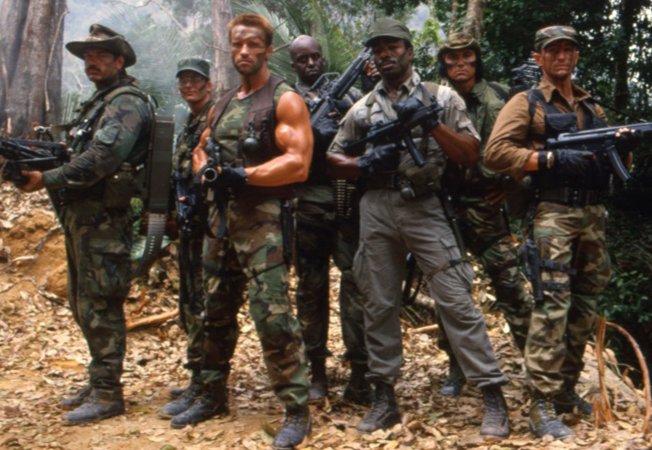 In partnership with the blog ScreenCraft, “First Draft” is a series on everything to do with screenwriting.

Here is a writing exercise sure to sprinkle a little fear into the heart of the average screenwriter:

You have a team of five badass protagonists to introduce to the audience—but you only have three pages to do it. What do you do?

To many, this may seem like an impossible task. A lot of movies have tried—and failed—to pull this one off in a convincing way. The Expendables and X-Men franchises are examples of movies that work to establish a lot of characters quickly, with varying degrees of success. But we’re here to tell you it can be done and done convincingly.

Need proof? We present to you the chopper scene from Predator.

What’s the set up? Dutch, the head of a freelance rescue team, has been hired by his old friend Dillon on a mission that’ll take them into a part of South America held by a guerrilla army. Dutch and his team are in the chopper taking them to their drop-off point. Those of you who have seen the film know they’ll eventually be hunted down by an alien creature on safari.

How many characters are in this scene? Seven. Dutch (Arnold Schwarzenegger) and Dillon (Carl Weathers), who have already been introduced in the previous scene, and the five members of Dutch’s team: Mac (Bill Duke), Blain (Jesse Ventura), Billy (Sonny Landham), Poncho (Richard Chaves) and Hawkins (Shane Black).

How does the scene start? Little Richie’s Long Tom Sally is playing on a boom box on the chopper, which tells us these guys really aren’t all that concerned about being dropped into a South American jungle surrounded by people who want them dead.

How is each character introduced? Through shorthand. Obviously, we can’t give these guys complex back stories in three pages, but we can give them character defining tics that we can play with dramatically later.

What’s his moment of characterization? He doesn’t say a word, but merely sits back and uses a disposable razor even though he’s clean-shaven.

What does this tell us about the character? He’s the silent, keep-to-himself type.

How is this used for drama later? As the monster starts taking people out one-by-one, Mac’s quiet personality becomes very loud as he starts to lose his cool. That shaving tic of his comes back big time at the end of Act Two, when he’s so anxious he cuts his face without realizing it. In fact, by the time he dies he sounds more like Blain. It’s that embrace of hyper-masculinity that leads to his death.

What’s his moment of characterization? Blain has chewing tobacco he offers to teammates he knows won’t take it, then berates them about their lack of masculinity.

What does this tell us about the character? Blain is a volcano of ’80s hyper-masculinity.

How is this used for drama later? Since Blain is so confident and imposing, it really scares the hell out of the team when the monster takes him out in act two.

What’s their moment of characterization? Hawkins tells a dirty joke to the stoic Billy to get a rise out of him and then feels pretty self-conscious when he fails.

What does this tell us about the characters? It tells us that Hawkins isn’t as steely-minded as the rest of the team, and Billy is unimpressed by all things.

How is this used for drama later? Hawkins finally gets Billy to laugh at the end of Act One, which the creature records and uses to taunt Dutch later in the film. Hawkins also dies because he’s pleading with a prisoner not to run instead of keeping his guard up.

As for Billy, when he starts to understand what the team is up against, his stoicism is completely shaken. That guy who was unfazed by anything at the start of the film becomes certain they’re all going to die.

What’s his moment of characterization? Poncho fires right back at Blain’s jabs about his masculinity with all the confidence in the world because he’s holding a freaking motor gun.

What does this tell us about the character? It lets us know Poncho is a defiant tough guy, despite not having as much of a physical presence as many of the others.

How is this used for drama later? This guy holds out right to the end of the Act Two. He soldiers on after a massive log swings into him, breaking his ribs. Once he dies, Dutch is truly on his own.

What’s his moment of characterization? When Blain spits on Dillon’s shoe to provoke him, Dillon keeps his cool and shoots him a clever one-liner to break the ice.

What does this tell us about the character? Dillon prefers a more bureaucratic approach to things, diffusing a situation before the breaking point.

How is this used for drama later? It’s revealed that Dillon does indeed like diffusing potentially violent situations. Later, Dutch discovers Dillon not only betrayed him, but also put his team—the one thing Dutch truly cares about—in danger. Dillon eventually sees the error of his ways and dies trying to save Mac from the creature.

What’s his moment of characterization? Dutch is mostly silent, only asking Dillon what kind of back-up his team can expect and what the mission details are. When told that there is no backup, he smiles and says, “This is getting better by the minute.”

What does this tell us about the character? Dutch’s only concern is the welfare of his men, but he also displays the fact that he and the team are a force to be reckoned with when he laughs off the details of not having any back-up.

How is this used for drama later? Act Two is all about Dutch trying his damnedest to save his team, but the creature hunting them is just too deadly. With no hope of being rescued, Dutch does the one thing he said he would never do at the start of Act One—he goes into a combat situation with the sole purpose of killing.

So, the next time you’re stuck with limited pages and an ensemble to introduce to the audience, remember it’s not impossible. Predator did it successfully, as did Aliens and the first Mission Impossible film. It’s about using broad strokes, tics, action, reaction and moments to introduce characters as quickly as possible.

This can be utilized in any genre where we have a group of characters that will be handling any given conflict at hand. Just stick to the essentials and the scene will write itself. MM

Ashley Scott Meyers is a screenwriter and podcaster over at SellingYourScreenplay.com. He has sold and optioned dozens of scripts over the last two decades. Through SYS he runs a screenplay analysis service, provides paid job leads to screenwriters and helps screenwriters connect with producers who are looking for material.

First Draft: Three Pros and Cons of Outlining Your Screenplay
First Draft: Is it Surprise, or is it Suspense?