How Do You Film Twin Scenes? Swan Song‘s Mahershala Ali and Ben Cleary Break It Down 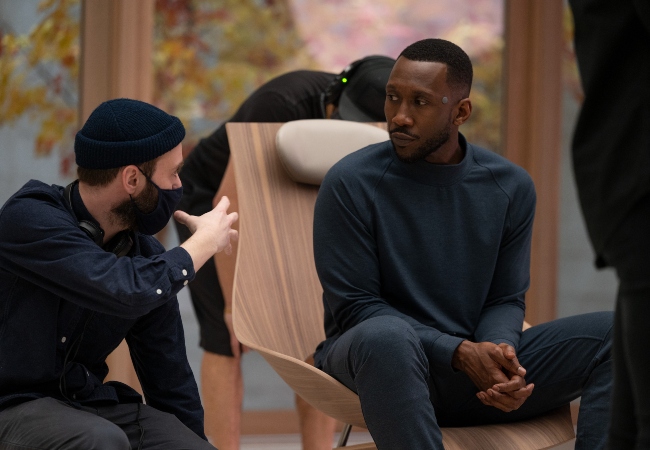 Ever wonder how twin scenes are shot in movies? Swan Song star and producer Mahershala Ali and writer-director Ben Cleary told MovieMaker how they pulled off those clone scenes with both of his characters, Cameron and Jack, in the Apple TV+ drama, which began streaming on Dec. 17.

They were able to pull it off thanks to a winning combination of Ali’s impassioned acting opposite his stunt double, Cleary’s skill with the camera, and some expert editing work to splice the different frames together behind the scenes.

“Somebody was working opposite of me and acting as me — my double, a gentleman by the name of Shane Dean, who did a wonderful job,” Ali told MovieMaker. “I basically just had to communicate what I was trying to do on both sides of the camera, and whether he was playing Jack first or Cameron first or vice versa, we would just work on the scene.”

Ali explain that he would get coverage as one character, and then they would flip and do the character opposite him. The key to keeping it all convincing was rehearsing with Dean.

“He and I had a little bit of time to work through the scene before we started filming. We would be able to fairly quickly accomplish nailing the rhythm and arc of the scene, and then I knew it was on me to make sure I was sharp on both sides of the camera,” Ali said. “But really, it’s splitting the camera and splitting the frame and patching it together, and sometimes we do over-the-shoulder stuff. But it was collaborative, is the simple answer — the whole process was really a collaboration just to help me get the best takes I could as each character, and then they taped it together.”

From a directing standpoint, Cleary wanted to keep it as simple as possible, forgoing some of the more dramatic effects in favor of old-school methods.

Also Read: Swan Song Star and Producer Mahershala Ali on Modifying a Script to Fit an Actor of Color

“The thing that I realized early on and as I started to plan this and test this with my team was that I wanted to try and work out a way to do this in as least a technical way as possible,” Cleary said. “For instance, we didn’t use any motion control. We used a repeatable head once for the dog shot, but we stayed away from motion control because I know it can be cumbersome sometimes. It can take a while [with] setup times. If it stops working, suddenly you’re waiting around for two hours. So we reverted to the older school techniques — stitching pans, split screens, close over the shoulder work using Shane Dean, our wonderful double.”

It was very important to Cleary and his team, which included editor Nathan Nugent, not to show off, either.

“In terms of the actual style of it all, I never wanted to get too showy,” he added. “I knew that we needed to… let the audience willfully suspend their disbelief really early on with a few shots so that they forget about it almost. But after that, I really tried not to be too showy with it. Myself and [director of photography Masanobu Takayanagi] would always say, well, if we did just have two actors here, how would we shoot it? Are we just doing this because we want to show off the twinning? And if ever the answer was even a hint of yes, we wouldn’t do that shot.”

If you, like me, were wondering what a repeatable head is, Cleary explains that too.

“A repeatable head — so that’s a motion control thing where, essentially, the camera’s on his head, and whatever we do with our move, once we’ve decided that’s the move we like, it’ll repeat that identically. And what that means is that you can actually put the two shots together because they’re perfectly identical. You can have two people in the scene because you can split the screen that way,” he said.

“So imagine if we were to do it just static split screen, right? You’ve got Mahershala on one side, he acts out that side, and then we keep the camera exactly where it is. Then we can actually get him coming in on the other side, and then we just we can split the screen and because of the camera never moved, it looks like they’re both in the same space. When you move the camera, it becomes a lot more difficult to split the screen because the different moves are going to be slightly different. So what motion control does is it allows you to literally exactly replicate a move… it’s really useful, but it’s technically cumbersome. So wherever I could work out a way to not use that equipment, we opted for that.”