How They Did It: Working With Students and Screen Vets Alike on an 18-Day Shoot to Make Sarah Q

I’ve been making movies professionally since 1978, when I stepped out of Emerson College in Boston and right into directing my first feature, Beach House (New Line Cinema), convincing a CPA to invest $250K in our maiden venture. To say I’ve learned a lot since then is an understatement, with 22 features and 20 shorts under my belt.

Since I had no real mentors I had to figure it out myself, courtesy of screen influences like Ford, Wellman, Walsh, Hawks, Hitchcock, Vidor, Garnett, McCarey, Fellini, DeSica, Visconti, and all the great ’70s directors like Coppola, Scorsese, Bogdanovich, Peckinpah. Studying these greats, along with the discipline of making shorts in film school, provided a major education. The rest was trial and error.

I was fortunate enough to make money for my investors, and one film led to another. Along the way I acquired a rep as an actor’s director, with an eye for new talent: John Leguizamo, Denis Leary, Amanda Peet, Gretchen Mol, Zach Braff, Matthew Lillard to name a few. Like every filmmaker I have a list of projects that got away, with years of work, time and money yielding an unrealized project. That was the case with my latest feature film, Sarah Q. I was close to making a gangster comedy, All Mobbed Up, when the funding went away. What to do? Get your friends together and make a no budget movie. Fortunately I have some talented friends: Oscar-nominated Burt Young, “Paulie” from the Rocky series, who I had directed in The Deli and Blue Moon, Sally Kirkland, another Oscar nominee I had slated for All Mobbed Up; five Sopranos regulars—Tony Sirico, Vinny Pastore, Federico Castelluccio, William DeMeo, Artie Pasquale—great NYC character actors Joe D’Onofrio, Steve Stanulis, Victor Colicchio, Sonja O’Hara, Maggie Wagner, George Andreakos, Kelsey O’Brien, Natalie Wetta—all of whom have been in six-to-ten of my films over the years, and The Deuce’s Garry Pastore who I had cast in his first starring role in Men Lie 25 years ago. I took a chance in casting my Sopranos actors against type: Sirico and Pastore play ex-cops, Castelluccio and Pasquale teachers, DeMeo an indie director. They all prove their versatility in Sarah Q.

I started teaching acting for the camera 20 years ago at One on One NYC, and at a conservatory for six years. What I experienced with new actors would provide the narrative for Sarah Q, the story of a small town girl who moves to Manhattan to attend acing school and falls prey to the dangers of the big city.

I would end up casting 25 actors out of my phone book, creating the title role for the young actress Emmy James. The role of Sarah Q was extremely demanding on many levels, and Emmy worked every day of the 18-day shoot in extreme emotional circumstances. I rounded out the young cast with my former students Ashlee Macropoulos, Samantha Scaffidi, Sarah Seeds, Dom LaRuffa, Makaela Shealy, Lo Friedenstine, Eden Wright, Patricia Yeazell and Piper Parks. What do all these young artists have in common? The most important trait for a new actor—they know how to take direction. If my track record with new talent is any indication, you will be seeing these artists in many movies to come.

I had a first act and a last act, and asked Joe Benedetto to write the rest. I was a fan of his award-winning short Hide the Sausage, starring my pal Joey D’Onofrio, who introduced us. Joe and I never wrote together in the same room, yet our styles blended seamlessly. Due to my experience I focused on the conservatory scenes, while Joe gave the rest of the script an informed “movie-movie” approach. He also highly recommended his longtime DP Ken Kotowski. I’ve worked with some world class DPs over the years—Craig DiBona ASC, Phil Parmet, Bob Lechterman, Larry McKonkey—Ken is in their company. I encouraged him to bring as much visual panache as possible so I could focus on narrative and performance. I like to cut in the camera, hence I give the DP a lot of leeway. Faith Kelly is an eagle-eyed production designer and I never rolled camera without her at the monitor with me. She devised some creative touches for which I will be unfairly credited. These two valued collaborators and their respective crews helped make it possible for most shooting days to run only eight-to-ten hours!

All good… but with an 18-day-schedule in frigid February, and nearly 70 actors on a SAG Ultra-Low budget, I faced some of the greatest challenges of my career. It took all my experience to tackle this one. I called upon many lessons learned earlier in my career. I learned from Scorsese not to call cut when a scripted scene is over, let the actors continue and do whatever they want. Nine out of ten times you can’t use it, but the tenth time can be magic. I also modified this approach to come up with comedic toppers to many scripted scenes. If they worked on set they stayed in the movie.

I learned a long time ago to start my editor (in this case my longtime colleague Alex Yew) on day two of the shoot. I also had my regular composer Ernie Mannix start writing cues in pre-production—these two practices saves at least a month in post.

What did this old-timer learn? As always, as much pre-production as possible. Since Sarah Q is a performance film; the acting had to be superlative in order for the movie to work. Fortunately I had worked with the younger actors in my acting class, so I knew what they could do and they all rose to the occasion with complete dedication.

There were only two problem performers. One, a working actor with a face from a Fellini film ho never learned that less is more, hopelessly overacted and made faces; my usual couple takes became six or more. A stand-in/model to whom I gave a break turned out to be a one-note wonder, also wasting time on this delicate schedule with her refusal (or inability) to follow the simplest of directions. We soldiered on, but in post I had to trim her role considerably. Lesson? If not 100 percent certain of an actor’s skill, do auditions. 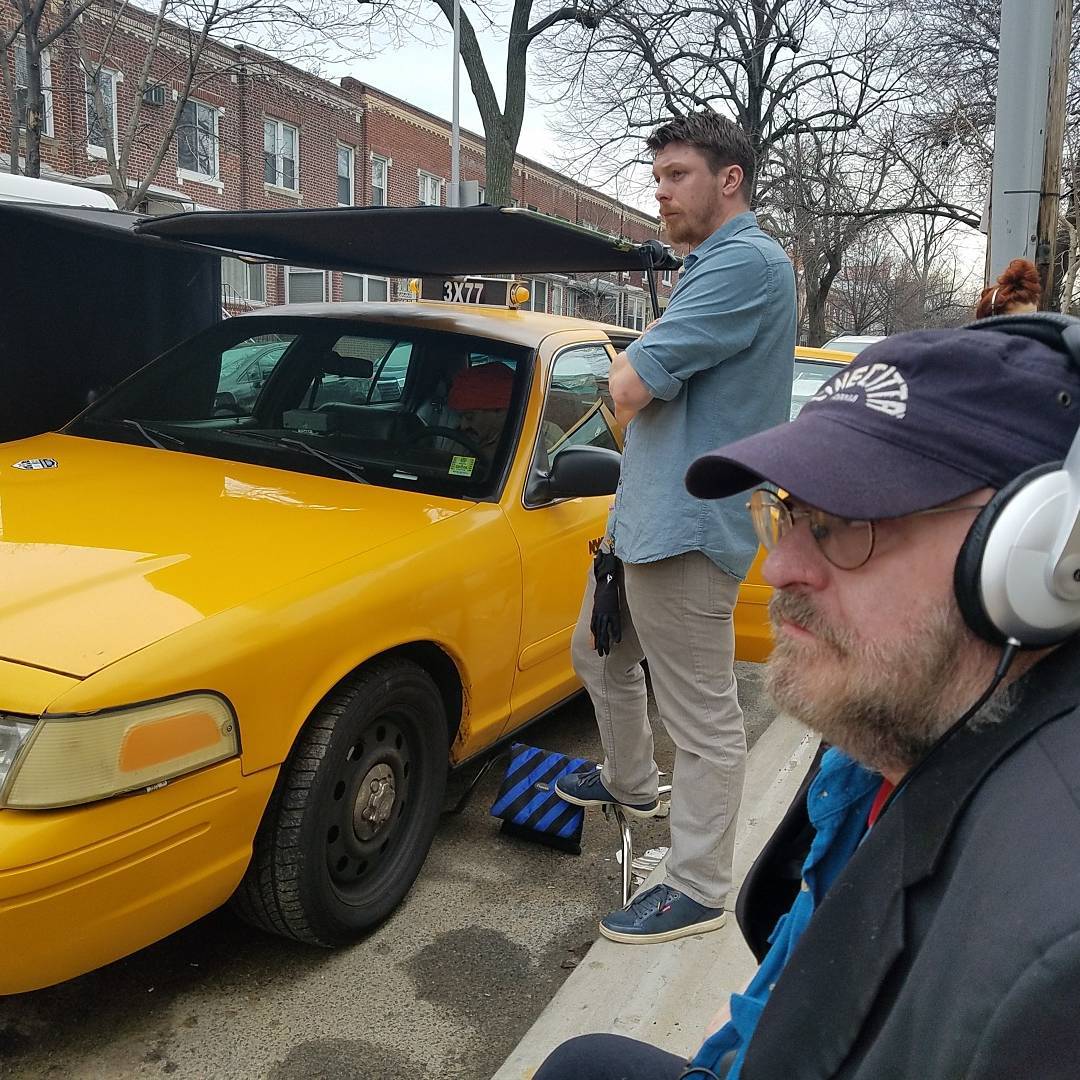 DP Ken Kotowski and Gallagher on the set of Sarah Q. Photograph courtesy of John Gallagher

I also found an effective way to provide some compelling visual subtext. For the first half of the film, as Sarah begins her Manhattan odyssey, I dressed her in pastels and colors, while the New Yorkers (faculty and students) were dressed in blacks and whites. As Sarah continues down the proverbial rabbit hole, I slowly switched the color design: she’s in blacks, everyone else in bright colors. It proved to be quite effective. An unexpected animated sequence by Concrete Jungle Studio’s Steven Cartoccio was beautifully rendered, my first experience with animation. That lesson was, “Listen to the animator!”

Sarah Q was funded in December 2017, prepped in January, shot in February, cut in March, sound and music edited in April/May, mixed in June, and premiered at the Golden Door Film Festival in Jersey City in September to a sold out crowd. Emmy James won Best Actress in a Feature, Garry Pastore was nominated for Supporting Actor, and I was nominated for director. Ft. Lauderdale is festival number two as we explore our distribution options for 2019. MM

John Gallagher is celebrating his 40th year in the business, and was recently honored at NYC’s Cutting Room with a Lifetime Career Achievement Award. His other features include The Networker, Men Lie, The Deli and Blue Moon. He is the author of Film Directors on Directing and (with Frank Thompson) and Nothing Sacred: The Cinema of William Wellman, and continues to teach at One on One NYC.

How They Did It: Directing Actors, Stunt Doubles, Dogs, and Roosters on the Unpredictable Set of Mobile Homes
Where The Movie Came to Life: How Editor Bob Murawski Brought The Other Side of the Wind Back from the Dead