How They Did It: One Week and a Day’s Eulogy Scene Was Staged and Shot to Mirror Its Protagonist’s Mental State 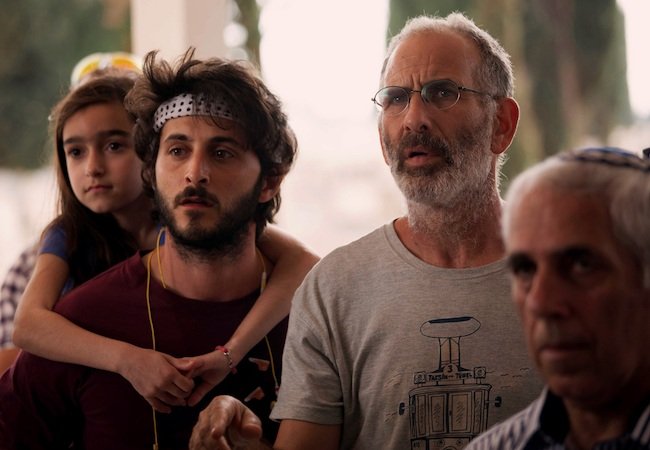 The heart of my film One Week and a Day takes place at the very end.

From writing to production to the very last moment of editing, the sequence that was the most challenging for our cast and crew. The following is a breakdown of how we developed and executed it. (Spoilers ahead.)

In the scene, Eyal (Shai Avivi) is forced to do one task: Buy the burial plots for he and his wife to be buried next to their son. One Week and a Day is about the ways in which Eyal and his wife cope with losing their 25-year-old son from cancer on the day after the shiva ends, and Prior to this scene, Eyal has not been dealing with what’s been going on in his life. As his wife tries to go back to their routine, he goes on a journey with their stoner neighbor, Zooler, (Tomer Kapon)  and a bag of medicinal weed he stole from the hospice room his son was in.

When Eyal finds out that he has missed the deadline and that the plot next to his son is sold, he rushes to the cemetery and stumbles upon the funeral of the woman that is going to be buried next to his son, where he gets to listen to a eulogy about her, told by her brother.

The idea for the sequence came from listening to the eulogy that my dad wrote about my aunt—his younger sister—at her funeral. (In a way, the idea for the film came from listening to the eulogy mixed with another story: When my best friend’s partner passed away after a long period of illness, a few friends came over to his place, and, to break a moment of silence, someone asked if he has some of her medicinal weed left.)

Eyal (Shai Avivi, R) and Zooler (Tomer Kapon, L) roll up some medicinal weed in One Week and a Day. Image courtesy of Oscilloscope Laboratories

In my first draft of the script, the protagonist, Eyal returns to the cemetery in order to reserve the two burial plots. The reason he rushes to the eulogy is because that was the one thing he was supposed to do that day, but with him getting stoned with his neighbor’s son and getting in to various escapades, he forgot to do it. So when he gets to the cemetery he finds out that the plots he wanted have been sold to someone else. He stumbles upon the eulogy given for the woman that is buried next to his son. This is the turning point for our protagonist—what he hears makes him go through a change.

During the first year of the writing of the script, all I did was change the names of the people in the eulogy I had witnessed and let it run for five pages, as one long monologue. The producers, Saar Yogev and Naomi Levari of Black Sheep Productions, were confident that I would pull it off. They saw a short film I directed, “In Bed at 10 P.M.”, in which the climax features someone reading a poem from a book to his love interest. It worked in the short and it was a testimony that it can work, in a different way, in the feature.

In the second year of my writing, I was accepted to the Jerusalem Film Lab. When the lab ended, I met with its director, Renen Schorr, who put my script in front of me, flipped to the where eulogy starts, and said: “You have to think about the audience. Make sure that they are not going to think about the laundry and the grocery shopping they need to do while this eulogy is going on.”

My re-write of the eulogy didn’t start immediately, because I thought I had it all nailed out. But I kept thinking about the note I got, and eventually wrote a sort-of-separate story about the brother giving the eulogy about his sister. In this version, we listen to him talk about his sister, then cut to a story of him grieving for his sister while being forced to deal with a simple task: cleaning bird shit off his window during his first day back at work.

This new version wasn’t always met with praise from people who read the script. Many did not agree that toward the end of the film, there should be a cut to a different character that we have not yet met to start telling his story. But my collaborators and I maintained that this was the heart of the film, where our protagonist undergoes his most important change, and decided it was a risk worth taking.

Casting the role of Raphael, the brother giving the eulogy, was not an easy task. Our casting director, Esther Kling, had a good point—the actor playing Raphael would have to be  someone well known. The reason: When he steps forward, those that know him among Israeli audiences will know that something important is about to happen. We need to listen to this guy. Further, choosing the right actors would be key to avoiding the chuckles that might be leveled at someone well-known appearing so late in the game.

Esther suggested Uri Gavriel, a phenomenal actor. We met for coffee and he soon got the role. We decided not to do any rehearsals, to keep it fresh for the shoot itself. Over a few emails, Uri would suggest some changes here and there. We also needed a cantor, as I wanted that part to be played by someone for whom conducting the ceremony would be second-nature. (If he had a beautiful voice to recite the prayers, even better.) I was lucky to find a retired cantor who shined on camera.

Location scouting was crucial not only for the eulogy itself but for the whole sequence. The defining feature of the cemetery that we were looking would be its size; it had to be one that Eyal could believably get lost in. I had a huge cemetery I had been to myself in mind, but we couldn’t get it. (Since another film crew did not treat it respectfully, they decided to ban any further shoots from their grounds.) Eventually we found our location and our DP, Moshe Mishali, and I spent two and a half days at the cemetery shooting the shot list this huge sequence entailed.

The main idea of the cinematography in the film was the idea of movement being consistent with the mental state of the characters.

Eyal, who starts the film stuck and stubborn, is shot either statically, or, when with movement, only from a tripod using pans, tilts and zooms. Conversely, his wife Vicky, who is trying to return to her routine as soon as possible, is shot with actual movement: dollies, stedicam and one subtle handheld shot—though every time she is charging somewhere she gets stopped by another force. As the film progresses, Eyal and Vicky take over each other’s mental state and adopt each other’s visual representation—Vicky progresses into a static state of mind (pans, tilts) and Eyal enters her world (dollies, handheld and stedicam).

We tried to do this as subtly as possible, to not call attention to it (at least not until now, in this article). The place that Eyal’s visual essence comes to play is the cemetery sequence, in which he is shown with dollies, cranes and then, as it seems that he might be transitioning, back to a zoom shot that leads to the one and only stedicam shot he has in the film, as he walks from his son’s plot to the eulogy.

How They Did It: To Juice Its UFO Scenes, Phoenix Forgotten Used Air Vacuums, Taxidermied Animals and Other Practical FX
How They Did It: Surviving British Columbia Downpours and an Errant Cow to Make Even Lambs Have Teeth