How They Did It: Maya Dardel Shot on a Hermit’s Property to Add Hundreds of Thousands of Dollars in Production Design 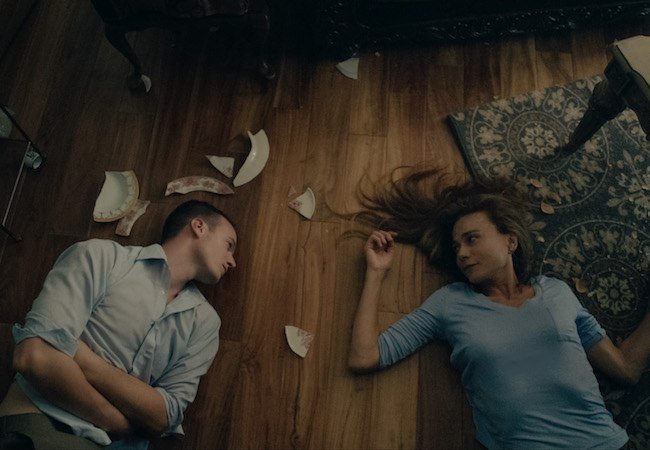 Co-directors Zachary Cotler and Magdalena Zyzak share behind-the-scenes stories on the production design and cinematography of Maya Dardel, shooting in confined spaces, and befriending a hermit of the Santa Cruz Mountains.

Let’s start with Friedrich Hayek: “The curious task of economics is to demonstrate to men how little they really know about what they imagine they can design.”

The curious task of independent film budgeting is to demonstrate to filmmakers how little they can design, period. Thus our economists, who call themselves producers, explained to us early in the group hallucination that was the making of Maya Dardel that our desire to build a house from junkyard gleanings was as doomed as Leninism.

But low-budget filmmaking, like other utopian enterprises, is blind to its own blindness, so we didn’t cut the scene in which the rivals Paul and Ansel reconnoiter the property of the eponymous Maya Dardel’s acid-dropping hoarder neighbor Leonora.

Instead, we approached Tom, hermit of the Santa Cruz Mountains, who in costume and demeanor owes more than a small debt to Poor Tom of King Lear. Tom, a retired engineer, has been collecting tractors, trailers, bottles, cans, welding gear, major appliances, cats, computer mainframes, and dust for nearly 40 years. Tom does not allow other humans onto his land.

“Tom,” I said on a desolate dirt road, “may we bring a camera, lights, a generator, 40 people and some actors, and a tent full of snacks onto your property and use the batshit house you built from old machines and shipping containers in our feature film?” “No,” said Tom. “Why not?” I said. “Forty people and some actors?” Tom inquired suspiciously. “Aren’t actors people?,” convinced he had, with this penetrating question, caught me at something, exposed some secret and nefarious intent. Fine. I’ll see your Tom, Tom, and raise you a Tom.

So, as an actor playing an actor in Stoppard’s Rosencrantz and Guildenstern are Dead once said, I said, “We’re actors — we’re the opposite of people!” “You’re an actor, too?” said Tom (the hermit, not Stoppard; Stoppard wasn’t there) with deepening skepticism. “No, that’s not what I meant.” Tom and I sized each other up, unimpressed by one another’s taste in menswear. “So, may we shoot here?” “No,” said Tom.

I enlisted the aid of my mother (not unheard of in independent filmmaking), who in the 1980s did peace work in the Soviet Union and is considered by men of a certain age so painfully beautiful as to disable their faculties of reason. “Tom,” said my mother upon arrival at the edge of his elephant graveyard of derelict backhoes and capsized RVs, “will you allow my son and his struggling band of malnourished desperadoes to shoot a few scenes in your industrial paradise replete with old pants inexplicably hanging from ropes?” “No problem,” said Tom.

And so we added, in a single move, hundreds of thousands of dollars worth of production design:

Now the moral of this fable about economics, filmmaking, and human nature is ambiguous, but I’ll leave you with Lenin’s conviction that revolution, in particular: “Large-scale machine industry…absolutely refuses to tolerate the survival of patriarchy…and is marked by a truly contemptuous attitude to the past.”—Zachary Cotler

Our protagonist Maya (Lena Olin) announces her intended suicide on NPR. In a series of charged “interviews,” she evaluates young male writers eager to become her heir and executor. Maya’s literary mind and frame of reference are compendious. By contrast, the action of our chamber drama is claustrophobically confined. It takes place in one house and its environs. While Maya inches toward suicide, real or faked, we, the filmmakers, were left with a challenge: how not to, by shooting out one location (with the exception of the junk-hermitage discussed above), commit an imitative fallacy and bore our viewers and ourselves to death?

While keeping the cinematographic style globally consistent, I wanted to come up with four subtly different camera styles, reflecting the personality of each of Maya’s candidates.

The first candidate, Mo (Chris Voss), set against Maya’s mantelpiece, appears immediately out of place and yet ironically at home: a hipster in a retro corner of a relative’s house. Only Maya’s not his aunt and not friendly. Her POV of Mo includes her own hand, regally resting on a pillow at the bottom of the frame. We intercut between mediums and medium close-ups as Mo’s awkwardness and Maya’s jaded confidence increase, leading to a sexual/neurotic apogee, during which the two at last jointly inhabit the frame.

Next up is Kevin (Jordan Gavaris), an academic poet whose critical theory jargon amuses but fails to impress Maya. As a visual anchor, we chose a large table to make the room more academic, the interview more conference-like, and to contrast Kevin’s abstraction with the table’s concrete solidity. With Maya and Kevin seated at the table’s opposite ends, the camera moves along the table lengthwise on a dolly: no connection, no intimacy, only a wooden axis of ideological and generational discord.

When I plan a scene, I like to think about it as a collection of fine art photographs (composed frames) to be bound together—for example, I might start in one photo, come to rest for a moment in another, land solidly on a third. When Maya speaks to Kevin about the three types of people who visit art museums, we start on Kevin looking confident, move to Maya puncturing his confidence, and land again on Kevin looking doubtful.

Maya’s next interview is with Ansel (Nathan Keyes). Unlike Kevin, Ansel traffics in aestheticism. He’s poetic and timorous, a connoisseur of outdated crafts, impressions and other ephemera. We tossed the table into the corner, bedizened it with textured bric-a-brac, and adapted Ansel’s way of seeing for the scene. A fragmentary visual grammar. Moody light, skewed framing, close-ups, extreme angles. Inserts of Maya’s hands, of glass and porcelain. Ansel regarding objects, objects “regarding” Ansel. Ansel and Maya starting on opposite ends of the room, their movement inward. A thread of communication between them, tying the scene together.

And finally, some houseguests are best kept in the yard. Maya interviews Paul (Alexander Koch) on a weathered green sofa amid bracken and pines. Blunt wide-angle close-ups distort their faces as their vehement power struggle increases and their picnic in the woods loses its veneer of civility and becomes combat in the jungle. Uncomfortable two-shots, strong blacks, jutting branches foreshadow aggression.

Whether or not Maya kills herself in the end you’ll have to judge for yourself. But whatever her master plan, I think it must be boredom that drives her more than any lack of will to live. She brings different young men to her lair to shake up the monotony. I hope our cinematographic choices serve a similar function.—Magdalena Zyzak MM