“Breathing Paintings”: How Liyana’s Co-Directors and Animator Honed the Style of their Mixed Media Doc 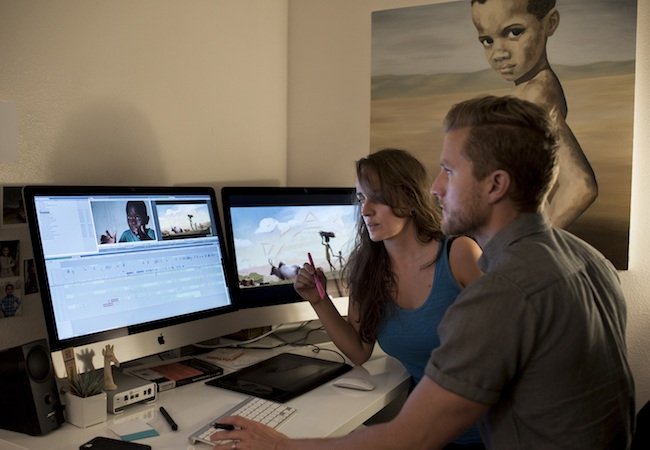 The story they write is about a young girl named Liyana who embarks on a dangerous quest to rescue her young twin brothers. The children who write the story have been orphaned and have complicated backstories. They draw inspiration from their own past experiences to shape their character’s sad, gritty, fantastical journey.

The real-life kids in the film are very good friends of ours. We wanted to make sure they would be proud of the end product and we wanted to ensure that the actual process of making the film together would be positive in their lives.

The fictional/animated storyline was essential because it allowed the kids to be free, unencumbered by any feeling of vulnerability about their own backstories. The kids could come up with all kinds of tragic, violent, funny, beautiful, crazy ideas without feeling personally exposed. To achieve this, we decided to trust in a fictional story to reveal truth in a way that a “pure” documentary couldn’t.

After the documentary filming was complete we had this amazing story, as told by the kids, and animation was the obvious way to bring their ideas to life. But we needed an animator!

An animated scene from Liyana. Image courtesy of Intaba Creative

After years of searching, we came across the work of Nigerian character artist and illustrator, Shofela Coker. We read an interview with Shof on AfricanDigitalArt.com and were impressed by his passion for telling positive stories out of Africa. We knew he was the one… Now we just needed to convince him to join us. So we flew to San Diego, where Shof is based, showed him the rough cut, and talked through some ideas for the animation.

The first instinct when animating a story written by children would be to animate their own drawings and embrace a childlike, maybe even stick figure kind of aesthetic. We were determined to go a different route. We wanted to bring the world they imagined for Liyana to life in a way that would be worthy of their brilliant minds.

Shofela was drawn to the poetic and lyrical elements of the documentary, and saw great potential for the animation to translate the children’s ideas into a visual language. He immediately got to work on a digital 3D sculpt of the Liyana character.

Shofela sent us that initial draft of the Liyana character that he had so quickly and deftly crafted from digital clay. We were stunned. Liyana had been brought into existence.

Now we needed to figure out what this animation was going to look like overall, and how we were going to accomplish such a massive workload, on a very limited budget.

Early in this process it was important for us to define a creative box for ourselves. Unlike the real world, in animation any kind of extreme camera angle or movement is possible, and we didn’t want to go down the rabbit hole of doing crazy stuff just because we could. In order to balance the energy of two worlds, the kids’ real lives and the fictional story they create, we decided to direct the animated camera as if it were a documentary production—as if it were shot by us with a real camera in physical space. Sticking to this documentary style in the animation helped to bring the two worlds together.

In feature American animation, character performances are often driven by voice actors as a first point of reference for character acting. So, Liyana is similar in that regard. The kids’ voices bring Liyana’s world into existence. However, in our film, our kids are charismatic and energetic enough to carry the weight of performance for their imagined characters.

An animated scene from Liyana

We decided early on to focus on the idea of “breathing paintings” as an animation style that compliments the live action. This style served as the most ideal dialogue between the live action and animated sequences. It possessed the right emotional and aesthetic sense of poetic charm and intimacy the kids’ story evoked.

The kids describe the characters in their tale in a very realistic manner. As if those characters have distinct traits of people they have experienced in their own lives. Therefore, we decided the characters in the animation should be sculpted and stylized in a more naturalistic manner in 3D. However, the kids convey the world Liyana inhabits in a quite impressionistic style. So these 3D characters were integrated into 2D sets and backgrounds that look more lyrical and surreal in their execution. The specific interplay you see between shape, color design, collage elements of patterns and Swazi fabric unify the two seemingly disparate elements of actors and backgrounds. Our animation is an aesthetic hybrid meant to speak to the kids’ own emotional execution of their story.

Composing shots so the visual hierarchy was always easily understood was key to the success of the animation in each shot. This usually meant composing shots in black and white first. Eventually the film’s animation followed a compositional language because of this necessity.

A scene from Liyana

Having 3D characters integrate with 2D backgrounds stylistically was a challenge in the early stages. Time invested in visual development concept tests helped that process. Creating sets, shape and color design that aided the style of animation was also a guiding rule set as the film took shape.

The volume of shots for such a small team on a tight schedule was another challenge. Eventually we hired more artists when the production pipeline was more concrete. We were also efficient and creative with the manner in which we reused art assets.

Of course getting the animation to hold together with the doc footage in a unified whole was an important goal throughout. We worked hard to find every possible way to unite the two mediums. We used color, composition, movement (or lack thereof), and sound design… everything we could think of to create a kind of dialogue between the two worlds, each responding to and interacting with the other. For every scene in the animated world, we color-corrected the corresponding doc interviews to speak to the lighting of the animated scene. When Liyana is in a bright desert, the interviews are light and airy. When it’s nighttime in the animated scenes, the interviews turn dark and moody. We found these final steps went a long way toward allowing viewers to get lost in the story.

A scene from Liyana

We’ve learned to just jump in and figure how to do things that we didn’t know how to do before—everything from After Effects to grant writing to music licensing… There is so much that seems mysterious out there—but with enough determination one can learn how to do just about anything. That said… finding the right collaborators is key!

We lost so much sleep over our many years of working on this film, and completely sacrificed any sense of work/life balance. But we all look back on that time in the trenches with a sense of accomplishment. It bonded us together and we’re proud of the results.

We are excited to be a part of what we see as a new wave of moviemakers exploring the very permeable (and basically non-existent) barrier between “fiction” and “non-fiction.” There have been a few great films lately that explore this area. It is great to see filmmakers who are pursuing this kind of unity in form and content in their work.

We wanted to follow the story wherever it led, not beholden to any notion of genre. We didn’t set out to make any particular “kind” of film, we just wanted to tell a good story. MM

Liyana had its world premiere at the 2017 Los Angeles Film Festival. For more information on the film, visit its website here. All images courtesy of Intaba Creative.