How They Did It: Graduating From Short to Feature-Length Production to Make 5 Doctors

I’ve been making movies with my 5 Doctors co-directors/co-writers/co-everythings, Matt Porter and Phil Primason, since we were kids.

Phil and I grew up in the same suburban town (Hastings-on Hudson, NY, where shot our movie), and spent many weekends running around with a video camera discussing whether a high-angle or low-angle shot would be more suitable for the car chase we somehow planned to shoot before either of us had our licenses. We had heard tell of Matt—he was the “film kid” in an adjacent town and our mutual friends who knew him from summer camp spoke of him as a 14 year old auteur. Phil and I viewed him with more than a little territoriality: we wished to have a monopoly on the Westchester high school market, but the unspoken truth was we were reverent and intimidated.  Word of Matt’s filmmaking prowess had traveled all the way from the halls of Rye High School to Hastings High. We really wanted to meet him and work with him. 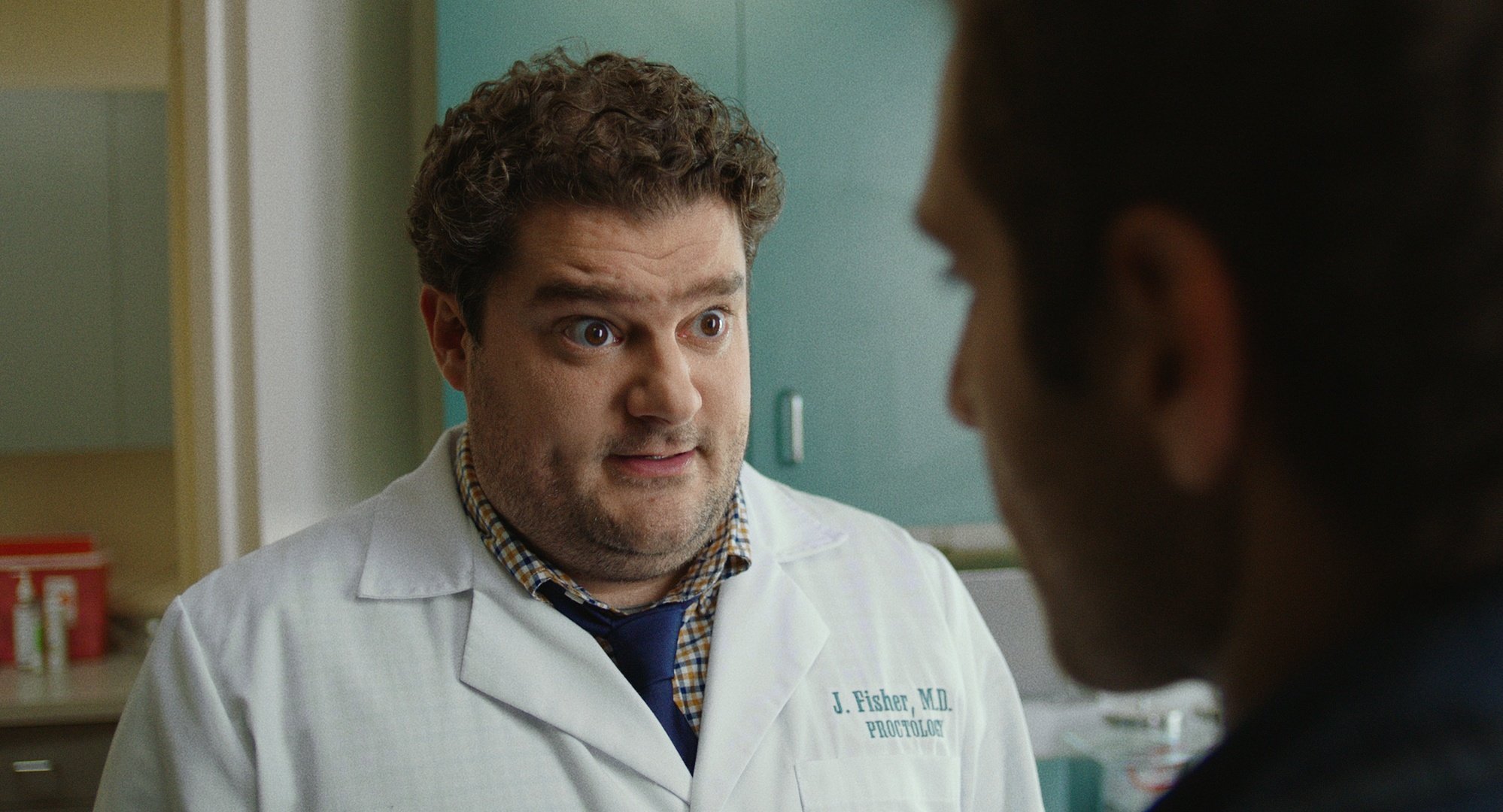 I went to Occidental College in Los Angeles (where Obama went for two years), Phil went to Columbia University (where Obama transferred to). Matt went to Tisch (I doubt Obama ever even considered this). Our first summer home from college, Phil and I wanted to make something that felt “professional” with “real characters,” that “looked good,” that wasn’t “embarrassing to watch.” We started writing a pilot we could write and shoot in our town. Who would direct it and bring it to life? What about that “film kid” from Rye? He would most likely be home from college as well. We swallowed what was left of our pride and called him up. He was indeed home for the summer, working at the Apple store “Genius” bar, looking for something to work on that wasn’t fixing  iPods . We met up, discussed the project and got to work. The three of us spearheaded that pilot) and then started making short films together, through college and after graduation. They increased in scope and quality, and eventually we got a few of them into film festivals. At this point, we had really honed our chops and learned to tell character-driven, funny, emotional, personal stories. The thing we all have in common is: making movies and telling stories has always been a respite, a comfort and a way to make sense of the world, our families, of feeling out of place and like maybe it was okay to be “weird” and “crazy.” We all had the same coping mechanism, and the same love of it.

After being out of college for a few years, we knew that the goal was somehow, someway, to make a feature. We hit a ceiling with short films. They were a great learning tool, but eventually we started to feel a collective, “what do we do with these?” This industry and business is so overwhelmingly uncertain, the “path forward” is often so brutally unclear, and after years of making short films, screening them , posting them online, the uncertainty was starting to swallow us whole. We were all working day jobs that we hated, feeling broke, feeling desperate, feeling scared, feeling like maybe law school wasn’t such a crazy idea after all. (Maybe that Obama guy had things figured out.)

We started writing a feature together. It was something we would try to sell. It was too big to make on our own. I don’t remember if it was a period piece but it might have been. It seemed like an obvious plan: write an ambitious screenplay and sell it to Hollywood, make millions, breathe easy. Simple, tried and true, fool-proof. The three of us spent a few nights a week writing, adding in set pieces and characters and locations and helicopters. How would all of this get shot? That was Hollywood’s problem, not ours. All we had to do was write. But the writing wasn’t coming easily. We couldn’t figure anything out. We kept ripping everything up, changing the story, changing the characters, changing the conflict. We’d often sit in a room for hours and by the end of it, we’d recap by saying, “OK, so here’s what we’ve got so far: It’s a movie about a guy… and he’s… what’s he doing?” It wasn’t a story we were burning to tell (clearly), we were writing because we thought we should be writing, because it seemed like the right thing to do, but it wasn’t fun. It was painful.

The truth was we knew something wasn’t right, that instead of combatting the uncertainty by taking matters into our own hands, we were dancing around it. This was the first instance of learning a lesson we have since learned countless times in the process of making 5 Doctors, and I have since learned countless times by trying and failing to cobble a life together as an artist: don’t wait around for other people to come along and make your dreams come true for you. Keep your goals realistic; keep them attainable.Putting one foot in front of the other is a very doable if you are practical. It’s so easy to wait around and let someone do the work for you but it’s just not gonna happen. Instead, lean  on yourself, and the people who have your backs, who you trust. Also, make sure you’re excited by what you’re doing. If there isn’t excitement mixed in with the inevitable anxiety, something’s probably wrong. Is this the easiest thing in the world? Absolutely not. The voice in your head that says: “you can’t” and “you’re doomed” is always going to be there and sometimes it’s going to be so loud you think you’ll never be able to do anything ever again. Accept the voice and keep powering forward.

Emily Walton as Lisa in 5 Doctors

Anyway, we threw out the ambitious, maybe-period-piece-thing and started writing to our strengths. 5 Doctors was something we could make ourselves, like we had made the shorts. It would star me and Matt and our friends. It would be relatively cheap to make. It would be shot in Hastings. Perhaps most importantly, it was a personal story that we really wanted to tell, that we almost had to tell. It was about trying to be a creative person and what happens when the “real world” intersects with your dreams. It was about anxiety and fear. It was about our families, the place we grew up, our friends. About growing up and what it means to be a person and heartbreak and loss and whether you should be selfish or selfless, or whether it’s possible to be both.

It was very much in the vein of the short films we had made. And this was another valuable lesson: We already had a “thing” we were doing, a skill we were honing, a type of filmmaking and storytelling we enjoyed and we were good at. Rather than throw all that out and try and start over, when we started making a feature, we decided to build on what we already had. We knew what we liked to do, we knew what we did well, we knew what felt satisfying, and that was a result of doing nothing but making shorts for years.

It took years to put the movie together. We wrote many, many drafts. We got many, many notes and kept chipping away. We assembled a producing team early on who worked for free for a long time because they wanted to make their first feature and because they believed in the project. We put together a budget and it was years before we raised our first dollar. We put together promotional materials to help raise money: we shot a proof of concept scene, we shot professional looking proof-of-concept photos. Eventually, a lot of people generously gave a little bit of money and it all added up. But, again, this all took years. We also continued to make short films, together and separately, to keep generating material and to keep flexing the moviemaking muscle. But, whatever else was going on in our lives, 5 Doctors was a constant. There were lots and lots of moments of doubt, many periods in which we thought it would never happen, but we always kept going. Over the years, the team grew and the momentum grew.

The feature-length moviemaking process was obviously a lot more work than short films. But we were very prepared. And we had an incredible, experienced, passionate crew who pretty much taught us to make a feature on the go. And, the thousands of hours we had put into making shorts paid off. We had learned to walk before we tried to run.

Matt, Phil and I are still very much in the trenches of trying to make this “creative” life work, and we always will be, on some level. At the end of the day, I’m proud that we had a thing we loved doing, an invaluable learning tool—making short films—and we built on that when it was time to make a feature. Make short films. Make a lot of them. You will learn how to make movies, and what your voice is and what your tastes are. There are no shortcuts, keep making stuff. Miss you, Obama. MM

How to Start Never Stopping: Eight Tricks and Tips From Moviemaker Jorma Taccone
Beauty and the Dogs: How Tunisian Director Kaouther Ben Hania Made a Feminist Horror Film in Nine Shots