How They Did It: ER Chaos in Code Black

If you had rare access to one of the most intense medical environments in the world, how would you translate that onto the screen? Code Black, if nothing else, is a defense of documentaries made for a particular screen: the big screen.

From the outset, I wanted the audience to be fully immersed in the adrenaline, fear and organized chaos of an inner-city emergency department on the brink of overload.

I’m an ER physician myself, and I filmed Code Black over the course of my four year residency training. Training gave me a unique take on America’s ongoing healthcare debate. As a doctor, I was frustrated with our national dialogue, which seemed removed from the realities of my ER waiting room. You’ve got really sick people in front of you — they’re suffering right there, on your watch —  and we’re going to debate politics right now? No way. You have to act.

But taking action isn’t simple when you’re a new doctor. The emotions are raw and real. It’s difficult enough to translate the science into applied bedside care for a gunshot wound, a stroke or a heart attack; but these challenges become the easy ones. Our broken system is itself the most overwhelming, because there is no treatment, no algorithm, no antidote for that. Our physician characters realize this over the course of their training, and it becomes the narrative arc of Code Black.

Other excellent films have chronicled the healthcare crisis, including one that also embedded itself in an ER waiting room. But I felt Code Black had to be a film that was ultimately as personal as possible. It had to make the action and emotions of our characters visceral and experiential for the audience. Every filmmaking decision came down to this notion: how could we use our cinematic toolbox to achieve the ultimate behind the scenes experience?

I started with the team. My preference was to build a creative team with both documentary and narrative expertise. This was my first feature and I was lucky to combine the documentary guidance of three-time Academy Award-winner Mark Jonathan Harris, veteran producer Linda Goldstein Knowlton, and television and film writer Marti Noxon (Mad Men, Buffy the Vampire Slayer, Glee, ER). These relationships all started as cold calls. I said: “Look, I’m not connected and I didn’t go to film school, but I have some footage that I think you should look at. I think we have a film here.” To my surprise, everyone was down to receive my assembly cut.

I envisioned a theatrical experience from the start and I wanted a camera that would produce a proper palate. I chose the RED One. This was in 2008 when the Alexa wasn’t around yet, and I think there were only a handful of rental houses in LA that had a RED One available. It was still fairly experimental at this time; I explained we were going to use the camera handheld, off-rig, and a few houses said I was nuts. We were the first non-fiction project, at least in LA, to use the RED One, and it was a risky call. Built-out, that camera is an obtrusive 40lbs. But in tests, I knew it was the image the film had to have: its color space and depth felt organic to the musty air and old walls of the historic county hospital. 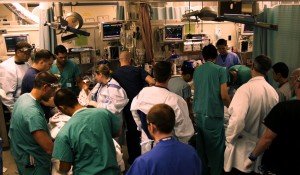 I was the DP for the first phase of production. Between the weight of the camera and the intensity of the environment, I knew it would be a physically demanding shoot. I prepped by doing a lot of posterior shoulder and back strength work for the few weeks leading up to production. What really paid off was being the hospital grunt I already was. At the time of initial filming, I was a rotating student — lowest on the totem pole of the medical training hierarchy — and so my scrubs and low-key status offset the big footprint of the RED One. Nobody really cared.

We, of course, did care about the patients and their feelings toward a camera being in the Emergency Department. As a physician, I don’t believe hospitals should be used for producing entertainment. In this case, though, the healthcare debate had grown so toxic I felt the message of the front line had to be heard. We designed a strict photographic consent process, knowing that a diverse patient population at a county hospital already has limited privacy. All patients were approached prior to filming for their consent, and afterwards were shown the footage for a final sign-off.

My favorite scene is toward the end of the film when the waiting room is packed with people, and the hospital is so crowded that it’s on internal disaster status: “code black.” Working with our editor, Josh Altman (We Live in Public, Bones Brigade, Tillman Story), and feature veteran sound designer Richard Burton (Babel, X-Men), we combined a montage of tracking shots from the waiting room with a custom mix of low frequency sound. This made for an overtly uncomfortable three minute scene, from the perspective of a doctor walking into a dangerously over-capacity waiting room.

The sound design makes the theater room rumble slightly — you feel it in your chest — and it’s accompanied with images of sick, suffering people. This is the closest I can get to making the audience experience the panic, guilt, and fear physicians manifest for patients who have waited over 20 hours for attention. I wanted them to feel the helplessness that overwhelms a doctor who can’t immediately provide care, who is swamped with more patients than time allows him to see.

Ultimately, I hope we made a healthcare film that is so experiential it transcends the politics associated with recent medical films. Just like the physician characters we follow, when you’re in Code Black, there’s no time for debate — you only see what really matters. MM