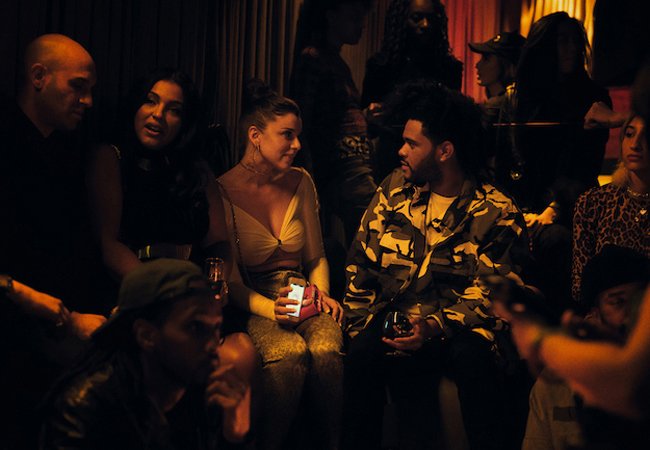 Josh and Benny Safdie’s Uncut Gems, now on Netflix, is a unique time capsule of 2012: NBA legend Kevin Garnett is in the Eastern Conference Semifinals, iPhone messaging has those pesky green text bubbles, and Canadian R&B singer The Weeknd (Abel Tesfaye) is an unknown artist on the precipice of blowing up.

The Safdies are no strangers to casting non-actors and musicians: Ariel Pink appears briefly in Heaven Knows What, and electronic musician Daniel Lopatin, aka Oneohtrix Point Never, has soundtracked their last two features, Good Time and Uncut Gems.

The Weeknd is one of many sources of stress in the desperate life of Howard Ratner (Sandler): The singer is trying to steal Howard’s girlfriend Julia (Julia Fox, the film’s breakout star).

At a December Q&A at the ArcLight Hollywood theater, Uncut Gems star Adam Sandler explained his reaction to seeing The Weeknd mentioned repeatedly in the film’s 165-page script.

“Every time I read ‘The Weeknd’ I thought, ‘Is The Weeknd really going to do this?'”

Co-director Josh Safdie was on hand to explain. He said Tesfaye liked the brothers’ second feature, Heaven Knows What, and that he and the brothers starting sharing films after he also enjoyed their bank heist-prison break thriller Good Time. Eventually, Josh Safdie said, Tesfaye asked if he could read their long-gestating Uncut Gems script “as a fan.” His response? “I want to be in this,” Josh Safdie said.

So the Safdies began to rewrite.

In the film, Howard becomes to threatened by  The Weeknd that the two get in a late-night scuffle.

“The Weeknd is stronger than he looks,” Sandler said. “Because he’s a great singer and has a very vulnerable voice and sounds sweet and everyone loves him, I wasn’t expecting him to have such strong arms and big shoulders. He liked to roll on the ground. He liked to get down.”

Uncut Gems, directed by the Safdie brothers, is now streaming on Netflix. Photo by Julieta Cervantes.