Fire Bones is a whimsical Southern Gothic story that follows a poet and a filmmaker as they unravel the mystery of a missing pilot and Pentecostal preacher who vanished on a transatlantic flight. Created with smartphones in mind, it tells stories episodically via multiple mediums, including podcasts, short films, music videos, poems, and still images. Each installment is called a “go-show,” and each go-show uses whichever medium works best for that part of the story. In this piece, writer Greg Brownderville talks about the challenges of making Fire Bones. You can watch a go-show above.

Our most daunting challenge was to manifest, in every dimension of the project, the central Fire Bones paradox: namely, that it is simultaneously digital and handcrafted.

The go-show’s head is happily up in the heavens, imagining new approaches to narrative, while its bare feet tread the Delta dirt. To illustrate this idea: there’s a character called The Beekeeper Spaceman. Think about that name for a second — in a metaphorical sense, as far as the Fire Bones universe is concerned, honeybees and spaceships are somehow one and the same.   Our brilliant audio supervisor, Spencer Kenney, coined the phrase “sci-fi country” to get at this idea.

The paradoxical aesthetic of Fire Bones gave rise to a thousand challenges along the way, some big and some small: For example, how do you build a digital interface that can choreograph a seamless interplay of mediums without becoming a soullessly slick, high-tech product? We wanted our website to be colorful and askew, like the homemade signs you see all over the Delta.

The key to bringing this vision to life was to build a terrific team, and in this we were very fortunate. Our cast and crew understood the language of the go-show. And by “language” here, we mean several things. Of course, there’s the language of the scripts, poems, and song lyrics. But there’s also a striking visual language. Our art directors, Kaila Rose Parrish and Jamie Lerman, come from the world of visual art, not from film or television. Thanks to their handiwork, our sets are like amazing art installations.

Meantime, Christian Vasquez and Kyle Montgomery photographed the video episodes with uncanny sensitivity and skill—the photography is at once elegantly lyrical and whimsically weird. Finally, there’s Spencer Kenney, whom we mentioned before and whose contribution to this project is colossal. He brought to the sonic dimension an adventurous sophistication that echoes Kaila and Jamie’s visual work.

Naturally it was essential that our cast enact the strangeness of the script, and they delivered beautifully. We marveled at the power and charm of their performances from the auditions all the way through those last hours of filming and recording audio for the podcasts.

As Fire Bones is set in the Delta, a very flavorful and distinctive place, scouting locations was a critically important step. We did capture a lot of footage in the Delta but always with a small crew. Principal photography was conducted in the Dallas area, where we live and work. 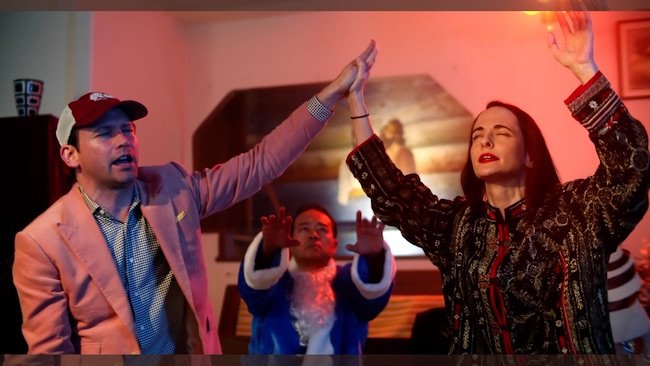 A few scenes needed to be shot in and around a big silver grain silo, and they required a large cast and crew. Silos are everywhere in the Delta, but it would have been too expensive to move our whole operation there, so we needed to find something close to Dallas. That was not easy. We drove around for days, searching for silos.

We finally found two in Prosper, Texas, on either side of a train track. It was hard to get in touch with the owner of the silos, but when we did, he graciously granted us permission to film in and around them. The interior of one of the silos was particularly picturesque, but the outside didn’t look right for the exterior scenes. Luckily, the outside of the other silo was perfect, so we planned to shoot inside one silo and outside the other.

We had a large crew on hand, a fairly sizable group of actors, and dozens of extras. The first big problem was that our generator went out, so we weren’t able to use the big, impressive lights we had brought. Instead, we had to scramble to relight the scene very quickly, using battery-powered LED lights.

Then something else went wrong.

We wrapped the shoot inside the silo and started loading up our gear to cross the train track and shoot our last scene of the day outside the other silo. Problem was, a never-ending train roared in out of nowhere and came to a halt right between the two silos. The train extended interminably in either direction, so that there was no way for us to cross the tracks. It was dark and getting cold on that January night. Cast and crew were growing restless.

We waited and waited and waited, probably for about two hours, but the train wouldn’t budge. Two hours felt like an eternity. We seriously considered going ahead and shooting the scene on the side of the tracks where we were stuck, but it just wasn’t going to look right, so we decided to stretch our patience longer. We worked hard to keep morale up and encouraged our extras to keep the faith and wait with us. A collective sense of humor was our only saving grace. In the end, our patience paid off—the train revved back to life and moved on down the tracks, disappearing in the starry distance. We’re so glad we didn’t settle because that scene outside the silo — which falls in the final chapter of Fire Bones — simply had to look right.

The Last Blockbuster Reveals the Real Reason Why Blockbuster Shuttered – and It’s Not Netflix
The Lost Pirate Kingdom: What You Need to Know About Anne Bonny, Irish Woman Pirate