How Does Legion M Work? Inside the Fan-Focused Backer of Mandy and the New Archenemy 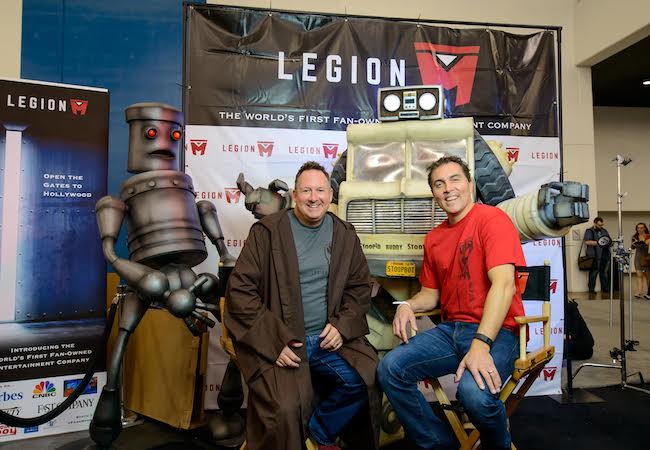 You’ve probably heard of Legion M, which bills itself as the first fan-owned entertainment company and has invested in beloved films like Colossal and Mandy, as well as the upcoming Archenemy. Legion M positions itself at the intersection of Sundance and Comic-Con, looking for fan-focused, high-concept films that value both originality and risk-taking. But how does Legion M work, exactly?

On the latest MovieMaker podcast, we talk with Legion M co-founders Paul Scanlan and Jeff Annison about how you can get involved for nothing — or go all in – and the company’s strategy to make money and return it to investors. You can listen on Apple or Spotify or above.

Scanlan and Annison are upfront about the fact that Legion M is a startup, and that most startups fail — and that even for major studios, financing films involves a large element of risk. So they invite people to get to know the Legion M community before investing.

“You can join completely for free if you want to, as a free member on our website, LegionM.com,” says Annison. “We know that a lot of people want to get to know us before you talk about investing, and we totally respect that. You can get access to a lot of the same perks and you get to really see what Legion M is all about.”

Investing costs a minimum of $100.

“And we tell people straight up, this is a startup company,” Annison adds. “So this isn’t a place to put your retirement funds or anything like that. But if you can risk 100 bucks, and swing for the fences, this is getting in on the ground floor. This is like investing in Disney back when it was Walt and Roy, and they were producing black-and-white cartoons.”

You can buy stock in Disney, of course — but that won’t buy you any input into what Marvel comic it will adapt next. Legion M gives investors a voice in films, using them to gauge the viability of a project, while preserving filmmakers’ ability to make final decisions. Members of the community may also be invited to get involved.

“When we go out and we start production on a film, like the case of Archenemy, one of the first places we go is to our community, to find out, are there people in our community that we can hire, are there things or opportunities that our community can help with?” says Scanlan.

The company also uses a tool called M-Pulse that seeks feedback on existing projects and potential new ones.

Also unlike Disney and other studios, Legion M is not yet a publicly traded company. Investors are getting in before the company goes public, which could potentially be very lucrative — so long as Legion M succeeds.

Scanlan and Annison are unique not only in the amount of input they seek from investors, but in their fannish commitment to their projects. As we spoke with Scanlan and Annison via Zoom, they showed up souvenirs from their shoots, including the Cheddar Goblin from Mandy and a replica of The Beast, the weapon of choice wielded by Nicolas Cage’s heartbroken character in the beautifully mind-bending film from Panos Cosmatos.

Sometimes they don’t just collect things seen onscreen, but put things onscreen. In the podcast, they explain how an investor in Archenemy ended up getting his car a prominent place in the film. The indie superhero film, from Adam Egypt Mortimer, is about a teenager who meets a mystery man named Max Fist (Joe Manganiello) who says he lost his superpowers after arriving from another dimension.

It’s a comic-book perfect Legion M story — one that is versed in sci-fi fun, but finds a unique way into it. The idea is to launch projects with fans who are not just monetarily but emotionally invested in turning stories into pop-culture phenomena.

“Our goal is to open the gates of Hollywood,” says Scanlan. “We want to find projects from voices that you haven’t already heard from or help people like Panos Cosmatos… to find an audience that he deserves to have.”

Archenemy, the latest film backed by Legion M, will be released this Friday from RLJE Films. Main image of Jeff Annison (L) and Paul Scanlan by Jeff Bartee Photography, courtesy of Legion M.