How Actress Alison Chace United Women Worldwide During the Pandemic

The coronavirus pandemic isolated humanity — but actress and entrepreneur Alison Chace wasn’t content to be isolated. Chace, who’s been bringing women together for years through her online community Pink Wisdom, used the pandemic as an opportunity to film a Zoom documentary, interviewing 25 women from over 20 countries.

“Perhaps it was a determination to flip the script during the malaise and anxiety of COVID lockdowns,” says Chace, “and instead of being confined and feeling shut in, to do the opposite, and reach out to women around the world.”

The documentary, titled Under The Same Sky, was filmed as worldwide mandates kept people in their homes. Chace’s three-woman team, including cinematographer Anna Andersen and actress Lucie Fleming, got creative, conducting Zoom interviews and incorporating footage the interviewees shot from their daily lives, rounded out with inspirational footage from Andersen. 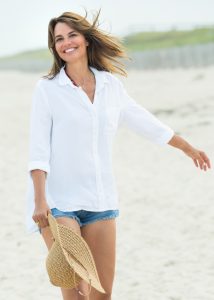 Each woman in the documentary, speaking in her native language accompanied by English subtitles, shares insights on defining love, developing potential, and bouncing back from self-doubt. Viewers will meet women like Sonia Nassery Cole, a human rights activist from Afghanistan; Xiaoli Mei, a relationship coach from China; or Renee Slansky, a writer and motivational speaker from Australia.

Chace aims to transport viewers into a collective “we” of experience alongside problem-solvers and champions of other women, who reveal that, regardless of race, religion, culture, or socioeconomic status, all women experience common pressures. Women around the globe overcome adversity day by day, and Chace believes if others could hear their stories, they just might be inspired to overcome, too.

The documentary offers an opportunity for women worldwide to come together through ideas and support, and Chace was inspired by the willingness of other women to share their lives and perspective with other women they may never meet in person. Studies have connected acts of kindness to dopamine release in the brain— and Chace took away an appreciation for the kindness brimming in women passionate about supporting other women.

“I learned there are many ‘yes’ women out there,” she says, “many wise and wonderful positive women, who are very interested in helping others.”

Under The Same Sky is making its way across the globe, showing to audiences at international film festivals as far away as Nepal, and recently won Most Inspirational Film at the Top Shorts Film Fest.

Although Chace took advantage of the pandemic moment to connect with women worldwide, she’s been mulling the idea over for years, after meeting Indian stylist Holly Schema in a New York City salon years ago to receive blowouts for auditions. Schema left an abusive marriage in Mumbai and came to the United States with her teenage son. Over hours spent in her stylist chair, Chace divulged her relationship tribulations as a single mom, and Schema offered humor and support, while relating her own dating stories and opinions on relationships. 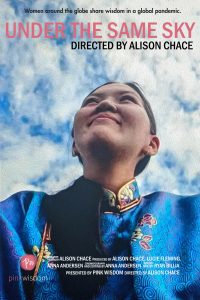 When Chace launched the Pink Wisdom website, featuring advice from female experts, she thought it would be neat to feature Schema, speaking in Hindi with subtitles. That sparked the idea to interview women from other countries, creating a global thread of love and female support. Chace says, “When Zoom became more household, it seemed like the perfect timing to go for it.”

The timing was also perfect in Chace’s own love life. A couple months before the pandemic, she’d met an Australian man on Bumble, and fell for him as they hunkered down together during the early days of lockdown.

“You know those first six months of the honeymoon period? When you feel your best, are radiating confidence, and are having sex five times a day? When you try to look your best for dinner dates even though you are living together and the dates are in your kitchen?” she says. “That’s where my head was during all this.”

Since she was suddenly “extra invested in learning about how the male/female dynamics work in Australia,” one of the first women she reached out to was Slansky.

Chace filled the rest of her pandemic year with writing a book, launching a podcast, helping to birth an online theater company, redesigning a comedy venture called The Dinger, acquiring an agent in Los Angeles, and auditioning for TV and film.

“The timing of my children being in college, allowing myself to risk falling in love, and just the wisdom of turning 50 — I realized there is no way I shouldn’t be living my absolute best life. This all created the perfect creative cocktail for me,” she says. “Life is good. And the more that life is good, it seems the more good comes my way.”