Leigh Janiak took a circuitous route to filmmaking – she was studying for her PhD in Modern Jewish Literature when she realized that she wanted to pursue film. So in 2005 she packed her bags and moved to Los Angeles, where she worked as a script reader and assistant producer before setting out to make Honeymoon, an intimate genre film on a low budget.

The result, a creepy, minimalist new entry into the relationship-horror genre, premiered in SXSW this March and opens in theaters this Friday, September 12, 2014. It stars Rose Leslie (Game of Thrones, Downton Abbey) and Harry Treadaway (Penny Dreadful, The Lone Ranger) as happy newly weds Paul and Bea who take their honeymoon in a family cabin on a lake. After Paul discovers Bea sleepwalking, naked and shivering in the woods, their marriage begins a slow, eerie fracture, posing the question: How well can we ever really know the ones we love?

Janiak talked to MovieMaker about the lessons she learned from the studios, the perils of shooting night scenes and water scenes on a low budget, and the inherent terror of memory loss.

Natalie Chudnovsky, MovieMaker Magazine (MM): You used to read scripts for a production company. Did that affect how you approach writing and directing?

Leigh Janiak (LJ): Well, I moved out to Los Angeles after grad school in 2005. I was a waitress and did other odd jobs, and I ended up working at Leonardo DiCaprio’s production company. I was there for a year as a creative producer’s assistant. So I wasn’t on set, I was in the office developing scripts and material. After I left Leo’s company, I went to work for a company called Misher films where I did a similar thing, reading scripts all day long. Scouring the internet for the next franchise or next idea.

It’s important to be reading and watching as much as you can. Being forced to be in the position to think analytically about narrative and character and development, getting an idea of how the business works on a studio level. Knowing that when the producer is saying something to the director, they’re actually saying something else. That’s invaluable. To understand what the studios are concerned about and what they’re looking for. Sometimes scripts that are being developed for the studio world end up getting overdeveloped because you’ve got a lot of cooks in the kitchen, lots of people with different agendas. Things fall apart quickly when that happens. Having a singular vision is very important.

MM: What was the writing process for Honeymoon?

LJ: My writing partner [Phil Graziadei] and I have known each other for a long time. We met each other in 1998 at NYU. We started writing in 2004 together. Phil and I go through a lot of drafts, but from the time we got Honeymoon to our producer, it didn’t change that much. We did small scene-by-scene revisions, but structurally it was intact.

We knew we were going to make the movie no matter what. Because of that, we were cognizant of potential production costs we’d have to take into account. We limited company moves, had a small cast. In retrospect, I probably would’ve thought about night a bit more, because the night aesthetic my DP and I came up is extremely hard to execute on a low budget. You need balloons and overhead lighting. Also, waterwork. Everyone tells you, “Avoid being in water if you don’t have any money.” And we were like, “It’ll be fine.” It was not. But my key grip, this awesome guy named Jose Cruz who we brought from LA, he spent a whole week in the water, in a wetsuit. We had a barge and we rigged the boat to that. He was in the water the whole time, with a floater between his legs. We’d be like, “Where’s Jose? Oh, he’s there underneath the boat, holding it there so we could maintain light.”

MM: How did you get funding?

LJ: I met my producer Patrick Baker when I worked at Misher films. He had a left a few years before I did to become an independent producer. We sent him Honeymoon, not for him to fund, but just so he could guide us into this independent world. But we got really lucky that he wanted to come aboard. His wife, Esme Howard, is one our other producers, and they’re an independent producing team. They were able to raise the money completely from private equity, which is great for a lot of reasons but mainly because we didn’t have to deal with any foreign presales which would’ve restricted our casting. It took a little over a year to raise the money, and then we were in production last spring.

LJ: We didn’t have a casting director, because we only had four characters to cast in the entire film. Patrick, my producer sent the script to all the major talent agencies and they sent us lists of people they represent.

I kept looking at all these guys who looked the same. In the headshots you could feel that they were trying to be movie stars, but I wanted Paul to be a real guy. When I saw Harry’s name I was really excited. I had seen him in Fish Tank and Control and Brothers of the Head. We sent him the script and he read, and he was awesome right away. I Skyped with him while he was in a trailer for Lone Ranger in full cowboy drag and make up. Harry’s charisma is huge, and when he’s on film, it’s a whole other level.

For Rose, I had read the Game of Thrones books and I knew what was going to happen to Ygritte. She had only been on one season at that point, in a couple episodes, and she hadn’t really broken. I knew her from Downton Abbey. She was not a submission to us, she was someone I pinpointed. We sent the script to her UK agent since she didn’t have a US agent. We thought we’d never hear back, but we did.

MM: How did you achieve the look of the film with your cinematographer?

LJ: My cinematographer is a guy name Kyle Klutz who’s a really close friend. I had known him for years and we shot the teaser for the film that helped us get financing, about a year before we went into production. Because we had that friendship already, we were able to spend a lot of time developing the look and the language of the film. Amour was a huge reference for our night interior look. We also looked at Zero Dark Thirty for our night exterior look. They do big overhead box lights which we have no money for. We had some balloon lighting but it was very limited. We only had a balloon for two days.

We let the camera be motivated by the characters interactions and movements. Not really feeling the presence of the camera, except where we juxtaposed it with the alien outside feel. The dolly work was motivated by that.

MM: What was the hardest scene to shoot?

LJ: The boring answer is the stuff with the lights. The actual groundwork of it was done by my key grip, Jose, and his people. Rigging that light outside of the cottage which as on a hill, so it wasn’t even. They couldn’t lay track evenly. So he ended up building this elevated – thing. Basically, the light we used hung from this thing he built and people would pull it around. Keeping it smooth and building it was intense and took so much time. And we didn’t have a lot of night hours because we were shooting in the spring.

The long bedroom confrontation between Paul and Bea was 12 page scene and we shot it over two nights. It’s very intense for them emotionally. It had stunt work, a lot of effect and make up work. It was also the most fun, but also mentally and physically exhausting to be stuck in that bedroom. 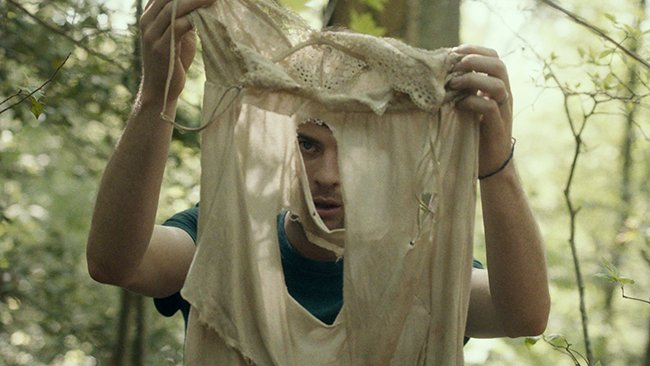 MM: Talk about some of the anxieties that run through the film.

LJ: The biggest thing is the idea of what actually constitutes you. I spent a lot of time thinking about that – if you dye your hair, you’re still you. If you put contacts in, still you. Amputate a limb, still you. But what about two limbs? Three? Where does that actual identity of a person live? Walking the line between body and mind. In Amour, the relationship between the older couple there as she devolves throughout the Alzheimer’s process informed how I watched Bea’s decay. How the very simple things that orient you in your world can be stripped away and turned into something foreign.

There’s something about losing the self which is pretty terrible. Not to mention the physical violence that Bea does to herself and that Paul ends up doing in hopes of helping her.

We spent some time researching brain trauma. You lose short term memory first and start forgetting the names of very specific objects that you interact with everyday and call them something else. Then you forget what you did two seconds ago. It was interesting to trace the different types of memory loss.

MM: How did you work with Rose and Harry on set?

LJ: They approach their performances differently, and it ended up working for their characters. Harry was very in it – he was consumed. When he was on set, he was Paul. He wasn’t full-on method, but he had a more organic way of approaching the character. Rose was very analytical, seeing her from the outside. I had anxiety because these were such different ways of approaching characters and it’s basically just the two of them for most of the film, but it ended up working well for their characters.

MM: Do you want to stay in the horror genre?

LJ: Certainly in genre. I consider myself more of a sci-fi than horror person. I’d love to live in the sci-fi space and I think horror will come in and out, depending on the project.

MM: What’s the scariest part of Honeymoon, for you?

LJ: It’s all kind of lost its effect because I’ve seen it a million times. But I think the first time I saw the proboscis, which is what we called the thing inside of her, was terrible but also satisfying.

The thing Paul pulls out of Bea, it’s actually a modified shower cord. My special effects artist is Christopher Nelson; he’s done American Horror Story. I showed him a lot of Alien stuff, where they use sheep’s intestine. We’re not allowed to use animal parts anymore, but that’s the kind of tactile feel I wanted. And he created it.

LJ: My writing partner and I just finished a pilot. We’re putting together that package for a limited series. Starting to look for new feature ideas. MM

Honeymoon opens in theaters on September 12, 2014, courtesy of Magnolia Pictures. Read our interviews with actors Rose Leslie and Harry Treadaway this Friday.