Home Is Where the Art Is: How Do Indie Moviemakers Balance Personal and Professional Lives? 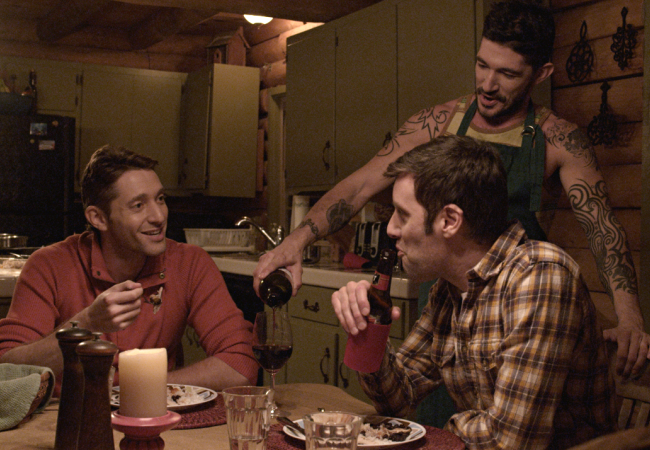 Personal and professional lives colliding: Most moviemakers know the phenomenon only too well.

Mixing the personal and professional can have alchemic results, producing deeply satisfying win-wins for moviemaking couples. Yet any tenuous balance between the two contains the worrisome potential to slip in favor of one side (usually, let’s face it, the work side).

I traveled to Los Angeles several years ago for a research project on filmmaking’s most vulnerable population, what anthropologist Sherry Ortner calls the “artistically-defined proletariat:” The unsung directors, producers and writers forced to work full-time day jobs while dedicating all their nights and weekends to projects that may never make a dollar or see a single big screen.

What I didn’t anticipate, however, was the toll that the harsh new economic realities were taking on moviemakers’ personal lives. As producer Mark Gill had pronounced in 2008, the sky really was falling, and not just on finances. Nearly half of the filmmakers I met were lonely singles resigned to seeing their dreams of romantic companionship go unrealized. Just as heartbreaking were those who had established families, only to find themselves unable to spend any time with them.

Eric Hayden, director of the sci-fi feature ASTRONAUT: The Last Push, told me over lunch in Burbank, “My son looked at me a few months ago before we were totally finished with the movie and he said, ‘Dad, I am never going to make a movie, ’cause it takes too long.’ I realized I’d worked on that movie for half of his life and over half of my daughter’s life!”

And yet, over the course of my fieldwork, I also witnessed the birth of the feature drama Tiger Orange alongside its proud parents, partners Mark Strano and Wade Gasque. And I sat in the household-turned-headquarters of Monkey Kingdom Productions where moviemakers Tara Platt and Yuri Lowenthal have transformed their spousal home into an artistic play-space. These couples are enjoying personal and professional success precisely by integrating the two sides of life we are taught never to mix: business and pleasure. Along the way, they seem to have found a solution to the tricky balance between busy work careers and the need for fulfilling leisure time.

In Santa Monica, Strano and Gasque eagerly described their project to me: a film the couple had conceived together that would allow each to showcase his individual talents (for Strano, as an actor; for Gasque, as writer-director). Thanks to a successful Kickstarter campaign, within 18 months of our initial meeting the two had produced Tiger Orange, a moving portrait of gay siblings which not only enjoyed sold-out screenings at dozens of festivals worldwide, but earned the pair awards (Strano took home Best Actor at Los Angeles’s Outfest, and Gasque’s efforts helped earn Tiger Orange Best Film prizes in both Madrid and San Luis Obispo).

Back at the Santa Monica coffeehouse, when Tiger Orange was still just a glimmer in their eyes, Strano and Gasque expressed caution about the prospects of bringing their relationship to the set. Specifically, Gasque wondered whether their romantic status might raise doubts in their collaborators’ minds: “Are people thinking that I’m giving Mark special treatment? Am I judging this objectively? Or can I not see things because I’m so close to him?”

But, as a blog post on the Tiger Orange website reveals, the key to their success was throwing caution to the wind by having their “hands in everything together.” Rather than cordoning off their romantic passion from the everyday grind of moviemaking, they combined the two to fuel a “superhuman strength” that proved necessary to get the project off the ground. In fact, Strano and Gasque explicitly referred to themselves throughout the process as “parents” of a “tightly connected family,” warning that “if we fell apart, the family fell apart.” And true to their word, the partners practiced tried-and-true principles of healthy family dynamics on- and off-set, staying humble and sane through “honesty, good communication, and realizing when you don’t know the answer.”

When I saw Strano again at a filmmaker focus group I organized at UCLA, he described his work with Gasque as “the utopia of working with the people you know you love.” After 20 years of trying to create the perfect marriage between his personal and professional lives, Strano’s experience making Tiger Orange was the “double rainbow” of “finally putting all the puzzle pieces together.” It seems, then, that one way out of the perennial filmmaker conundrum of work-play imbalance might be fusing bedroom with boardroom.

I learned a similar lesson from Platt and Lowenthal, a married filmmaking duo who offer an even more literal take on the tenet. Hanging out in their Hollywood abode, the couple was painstakingly honest with me about the difficulties inherent to their lifestyle dilemmas. In Lowenthal’s words, “We’re both working on the same sorts of things and it’s hard to take a break, ever. It takes a lot of personal energy every day. Eventually, we get tired and pass out.”

Platt concurred, likening their attempt at a multi-layered partnership to conducting a self-propelled train without tracks.

Yet in the same breath, both described the possibility of reaching a dream-like state of bliss through collaboration. As Platt pointed out, “success for one ends up being success for both.” Lowenthal agreed: “It’s such a beautiful thing” to share all aspects of oneself with someone “you know you can trust.”

The pair believe in wholeheartedly mixing career and family, rather than trying to maintain a rigid separation between the two arenas. To Platt, “the more things you are juggling, the more well-rounded and experienced with life you are. Taking it all in helps any of your creative endeavors.”

To that end, the two have remade their household into a creative workspace by running their co-owned company, Monkey Kingdom Productions, from home. In these headquarters, Platt showed me a small whiteboard the couple keeps on their kitchen table to display both the status of ongoing projects, as well as brainstormed ideas for future developments. “We both work so much that there has to be a way for us to touch base,” she explained, adding that having it there during dinner helps her “remember to bring things up [with Lowenthal].”

Platt and Lowenthal insist that the value of their joint venture not be measured only by standard industry results. “Both our marriage and our business have evolved and grown,” said Platt. “I think we’ve learned how to work with each other better on the work side, but also on the relationship side.”

The proof is in their prolificity: Monkey Kingdom Productions has celebrated several recent successes, including an award-winning run at the New York City International Film Festival with their steampunk short “Topsy McGee vs. the Sky Pirates,” as well as lauded festival screenings across the country for the children’s short “The Many Mini Quests of Rouge et Brun” and their mockumentary feature Con Artists.

But can such a tightly integrated personal and professional life have problematic consequences? For instance, what happens if the two sides of a filmmaker’s life simply don’t work (or play) well together? Besides the aforementioned lone rangers and overworked absentees, a final couple I met in L.A. offered another caution.

At a North Hollywood diner, married filmmakers Alicia Conway and Ben Rock emphasized to me the importance of supporting one another’s projects without necessarily working on things together. Film and TV producer Conway stresses her need to “do my work and find it valid” outside the participation of Rock, a director.

One anecdote from Conway and Rock struck home in particular. Rock described a recent birthday gift from Conway. In an effort to make more space for Rock’s personal life outside of the business, she had chosen a present he “could not really use for filmmaking:” a set of prepaid welding classes. Inevitably, though, the couple ended up making a (half-serious) list of all the possible ways to incorporate welding skills into Rock’s moviemaking.

“I can’t think of anything that I would ever do that I wouldn’t somehow turn into a job-related task,” said Rock. MM

David L. Reznik, Ph.D., is an assistant professor of sociology and advisor of the Cultural Studies minor at Bridgewater College. His book New Jews?: Race and American Jewish Identity in 21st-Century Film is now available in paperback. He thanks Stephanie Breen, the Bridgewater College Faculty Research Fund, and the Communication Studies Department at UCLA for their invaluable assistance with the research project referenced in this article. Featured image of Tiger Orange actors Gregory Marcel, Mark Strano and Frankie Valenti courtesy of Wolfe Video.