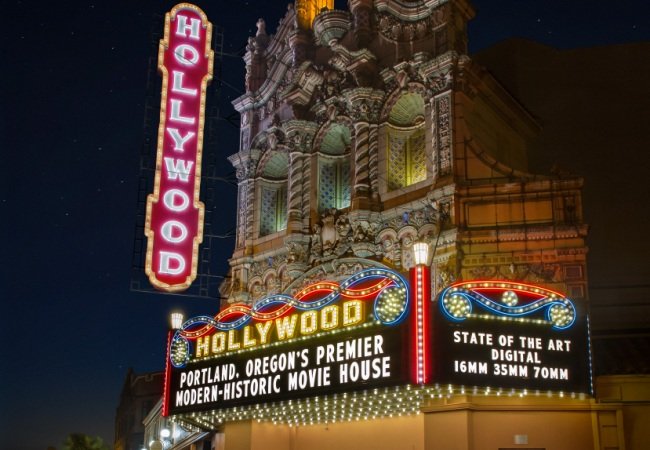 This spring the Hollywood Theatre, a nonprofit, Prohibition-era movie house in Portland, Oregon, will open an annex at Portland International Airport (PDX).

While the 90-year-old theater screens indie films and live performances and supports public art, the PDX annex, built to accommodate 18 seated people and an additional 10 to 20 standing, will screen short-form work from local filmmakers and partners, such as Travel Oregon and Travel Portland.

The short format is designed to provide travelers with down time while still keeping them on schedule for their flight. The program will be free of charge, appropriate for all ages, and highlight Oregon-based work (like that of the Hollywood’s youth education programs). The annex will sport a marquee modeled after the theater’s new, historically inspired marquee.

“Our goal is to introduce visitors to the diverse array of experiences Oregon has to offer,” said Doug Whyte, executive director of the Hollywood Theatre. “It’s an exciting opportunity to create a memorable experiential space for thousands of the airport’s daily visitors, while promoting Oregon artists, organizations and attractions. Public programs are a big part of what the Hollywood Theatre does. We prefer to spend our resources on community projects rather than traditional marketing methods.”

In 2014, Minneapolis-Saint Paul International Airport was the first airport in the U.S. to add a theater—which, like the PDX annex, runs regional indie films 24/7. Although airport cinemas are a newer concept in the U.S., major airports in Asia have long been onboard. Changi Airport in Singapore, for instance, has two movie theaters showing features, free of charge, 24 hours a day. Hong Kong International Airport has an IMAX screen.

The biggest challenges for U.S. airports are space and financial considerations, which is why early adopters have focused on small theaters playing indie films. According to Whyte, the response to the PDX annex has been very positive, and he’s optimistic that this trend will grow in the U.S. “I have already been approached by other theaters wanting to do the same thing in their city airports,” he said. MM

Back Against the Wall: Jeremy Saulnier’s Green Room Lands like a Punch to the Gut
Green Room Outtakes: Interviews with Anton Yelchin, Alia Shawkat and Imogen Poots