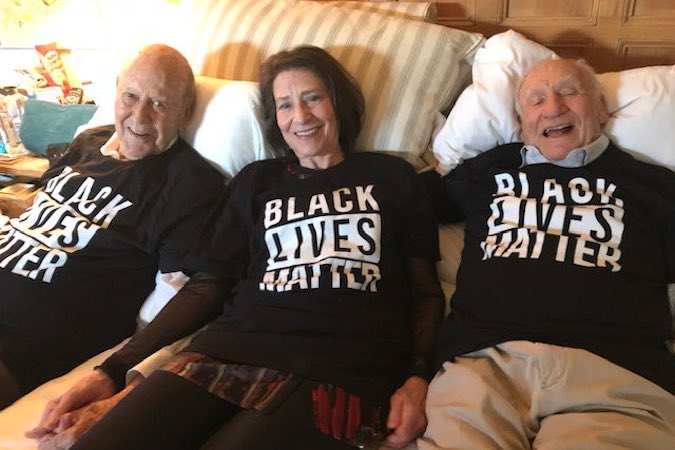 Carl Reiner delivered many messages to the world, but one of the last was this: Black Lives Matter.

The day before he died Monday night of natural causes at 98, his longtime manager, George Shapiro, posted a photo on Twitter of Reiner, his daughter Annie Reiner, and his lifelong friend Mel Brooks sitting together, all in their Black Lives Matter shirts. They were gathered together for Brooks’ 94th birthday, which he celebrated on Sunday.

Carl Reiner and Mel Brooks had a long creative partnership as well as a tight friendship: The pair teamed for a series of sketches and records around the “2000 Year Old Man,” in which Reiner played straight man to Brooks’ wisened, wisecracking ancient one.

Reiner directed movies including Oh God, All of Me and The Jerk, was as a cast member of Sid Caesar’s Your Show of Shows, and created The Dick Van Dyke Show. His partnership with The Jerk star Steve Martin included directing The Jerk and All of Me and co-writing The Man With Two Brains and Dead Men Don’t Wear Plaid.

What was he most proud of? We don’t need to guess, because last week, he told us.

“What I am most proud of are, creating The Dick Van Dyke Show and informing Mel Brooks that he’s 2000 Years Old and knows everything. This, and a lot more, in my Dispatches From Quarantine,” Reiner wrote last week, linking to this video:

Reiner was opinionated and active on social media until the end, writing Monday: “As I arose at 7:30 this morning, I was saddened to relive the day that led up to the election of a bankrupted and corrupt businessman who had no qualifications to be the leader of any country in the civilized world… At the same time, Hillary Clinton, who had all the needed qualifications to lead our beloved nation, had received 3 million more popular votes than our Russian-installed puppet president.”

Tell us how you really feel, Carl Reiner. Rest in peace.

In the Heights Stars Say the Film Celebrates ‘the Essence of Latinidad’
Movie News: How Filmmakers Get Fooled; Tom Hanks Is Right; Olivia de Havilland Is 104