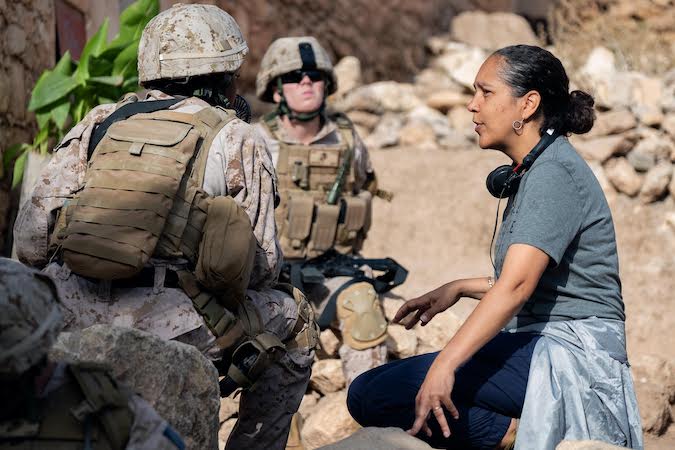 Set during the Kingdom of Dahomey, a powerful African state in the 18th and 19th centuries, the film follows Nanisca (Davis), who leads a female military unit. She fights alongside her daughter Nawi against the French and neighboring tribes against dishonor and enslavement.

“We at JuVee are beyond excited to introduce this incredible story of the Women Warriors of The Dahomey Ahosi tribe to the world. It’s time that they truly occupy their place in history and in Gina Prince-Bythewood’s hands, it will be a gamechanger. This project could not be a more perfect example of our legacy,” Davis and Tennon said in a statement to Variety, which first reported the news. MovieMaker has confirmed the details.

Prince-Bythewood (pictured above on the set of The Old Guard) is the guest on our latest MovieMaker Interviews podcast, where she talked about her journey from directing Love & Basketball, her breakthrough film, to Marvel’s Cloak & Dagger TV show, and now The Old Guard. You can listen on Apple or Spotify or right here:

Davis won an Oscar for Best Performance by an Actress in a Supporting Role for the 2017 film Fences. She also earned two other Oscar nominations, including one for The Help, but recently expressed ambivalence about the film. The Help told the story of Black domestic workers during the Civil Rights era, but has been accused of trafficking in white-savior tropes.

“There’s no one who’s not entertained by The Help. But there’s a part of me that feels like I betrayed myself, and my people, because I was in a movie that wasn’t ready to [tell the whole truth],” Davis recently told Vanity Fair. She added that The Help, like many other movies, was “created in the filter and the cesspool of systemic racism.”

How I Fought a Life-or-Death Battle for False Colors, the ‘Budget Bourne’ of My Dreams
Comrades! Enjoy This Hideously Great Sputnik Concept Art