What’s most enjoyable, both in films and in life, isn’t the destination itself but the journey—even if the promised land doesn’t ultimately exist. That’s the feeling Paul Thomas Anderson evokes in his latest, Inherent Vice.

Adapted from Thomas Pynchon’s novel, the film’s murky plot and vast number of highly memorable peripheral characters make for a film that is absolutely nonchalant about its most basic mechanics. Who cares about the actual meaning of it all when this dream cast delivers such intoxicating performances? The need to find satisfying answers vanishes with every perfect line of dialogue, a mixture of wit, nostalgic charm, and a hefty dash of salty noir-ish conventions, all filtered through Anderson’s directorial idiosyncrasies.

Eclectic and often revelatory, Anderson’s influences range from classic TV, to pop culture treasures, to new Internet talent. He shared and discussed some of these clips with Kent Jones at the New York Film Festival back in October, during a special event entitled “On Cinema: Paul Thomas Anderson.” Here are some insightful highlights from that conversation.

On Police Squad and TV

While Anderson’s more somber films, such as The Master and There Will Be Blood, have little room for comedic exploits, Inherent Vice gave the director a chance to return to the hilarious Boogie Nights days. Humor is something Anderson has always cherished. After showing Jones a clip from the refreshingly smart ’80s show Police Squad, Anderson talked about his indoctrination into good comedy by his father’s hand. As the pair watched the series together, young Anderson observed the things his father found funny, and this honed his keen eye for wit.

“It made such an impression on me; it’s hilarious,” said Anderson to Jones. “Some people go outside and smoke and that gives them something to do, I got on YouTube and watched Police Squad.”

Adding to his enjoyment of the show, Anderson confessed, were the show’s originality and sophisticated writing, which encouraged him to pursue storytelling beyond the conventional. “It was so fresh. It made me think, ‘You can do anything? You can do anything you want and that’s OK?’” Leslie Nielsen and Alan North’s irreverent banter, which reveled in the humorous potential of the sequences rather than in their narrative logic, has stuck with him throughout his career.

Journey Through The Past and Hippie Stereotypes

Neil Young’s almost-forgotten debut feature might not present an obvious connection to Anderson’s work, but when looking at the characters of Inherent Vice, the influence becomes clear. Inherent Vice‘s Larry Sportello (Joaquin Phoenix), is a laid-back, pot-smoking detective in the archetype of  the ‘70s vagabond. Similarly, Journey Through the Past follows a long-haired wanderer enjoying the simplest pleasures in life, while not abiding to the system’s expectations. Who says a detective can’t look like these guys do? 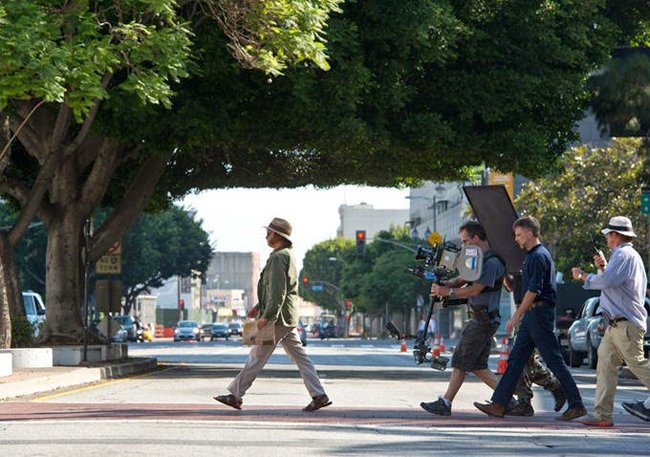 Anderson and his crew film Doc, portrayed by Joaquin Phoenix in Inherent Vice

At the event, Anderson showed a clip from Journey Through the Past in which a young man and his girlfriend waste the day away without much to worry about. “This scene feels like my idea of heaven on a Saturday afternoon. Cruising around with your girl, parking your jalopy with a babbling brook nearby, taking a joint out, eating some strawberries. I don’t know how it can get any better,” he said of the clip. He went on to discuss a scene that was left out of Inherent Vice, in which Sportello and Josh Brolin’s character discuss the Manson Family’s infamous reputation. After the Manson murders, the notion of hippies being peaceful junkies faded away, and the media turned them into sadistic murderers in the general population’s eyes. In Pynchon’s novel and Anderson’s film, however, they reclaim some of those original non-threatening qualities.

On Jackie Brown and Other Classics

Comparisons between Inherent Vice and Quentin Tarantino films are certainly expected. Numerous and peculiar secondary characters, devilish dialogue, and dark humor in violence are all present here. One Tarantino film in particular, Jackie Brown, spoke to Anderson. He selected a clip in which the protagonist Jackie (the great Pam Grier) and bondsman Max (Robert Foster) discuss aging and unfulfilled hopes over breakfast.

“These people feel the clock ticking… That dialogue is so beautifully written and so perfectly acted, with such grace, delicacy and sweetness,” said Anderson. He talked about the subtle but powerful way in which the scene is edited to include mundane cutaways that give the scene a purity in the midst of madness.

Another classic film Anderson cited as a major influence was Repo Man, particularly a scene in which angsty punk Otto Maddox, played by Emilio Estevez, tries to convince his suburban parents to buy him a car. “I recognized this world,” Anderson said, describing the connection he felt to that teenage life in suburban California. He also cited Hitchcock’s North by Northwest, praising Hitchcock’s economic used of exposition through sound in the airport getaway sequence: “The exposition is mercifully drowned out by the sound of an airplane. It’s a great way to deal with exposition that no one cares about.”

Sweat, bodies and slow-motion madness filled director Emily Kai Bock’s video for “Oblivion,” a song by Canadian artist Grimes. “It gets me going! When I saw it, it made me hyper; it made me bounce around the room. I just wanted to bounce off the walls. It’s not just a great song–because it is a great song–but everything comes together here. You’ve got this great song, you’ve got this great performer, and then teamed up with these visuals, everything clicked,” said Anderson.

He found the energy created by the rough, yet subtle, images in the moody music video fascinating. “Taking this amazing performer into a real situation is sort of spooky too. It gets you pumped but it’s also spooky. It’s so graceful the way she does that. There is great energy but then this energy starts to get a little bit crazy when you see the faces on these frat guys dancing around. It’s all too real and it’s all too date-rapey. There is danger underneath it, but on top of it this just makes me want to dance.” Anderson added that he sees a bright future ahead for the young filmmaker: “She is great. She’s done a lot of interesting work. She uses these sort of ‘beautifully ugly’ locations. She is doing great work right now.”

On Music Videos and Longing for MTV

Having directed his own fair share of music videos, Anderson understands how the power of music and film in tandem could create unforgettable audiovisual moments. “I remember the first time I saw a music video, it was for Devo in 1979 and it was spooky as hell. It was my uncle’s fault; I was nine years old. My mother would tell him, ‘Don’t take him to see Animal House!’ and I would say to him, ‘Would you take me to see Animal House?’ He knew it was no good to take me, but I feel like it was a way to get her mad. As we were walking, heading to the theater he’d say, ‘Wait, I think I just saw your mom!’ I was paralyzed. We were getting to the theater for a late show, and that was already bad enough.”

It was a clandestine outing for a young Anderson, but what was to come inside the theater was a revelation. “Then, on screen, this music video comes on. It wasn’t what I was expecting, I had never seen a music video before, I’d certainly never seen Devo before. They came out with these strange suits. That was my first experience with music videos, I was terrified but I loved it.” MM

Poetry in Motion: James Franco and 12 Students Create The Color of Time
A Terrible, Beautiful Experience: Bennett Miller Exposes His Actors to Profound and Painful Depths For Foxcatcher